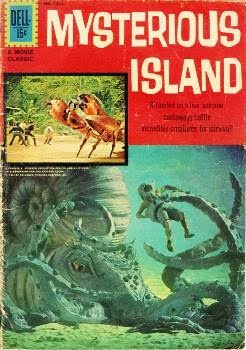 Jules Verne wrote a book called Mysterious Island complete with strange creatures and the wet dock for Captain Nemo's Nautilus. Today a new island has been formed with less than monstrous creatures and being invaded by the human species.

Discovery News
In January of 2009, a hellish storm packing 125-mile per hour winds raked the Gironde estuary in western France, whipped the sea into a frenzy, leveled trees on land, and killed 26 people.

And in its wake, a strange new island was born.

Storms often pile sand and sediment high enough to form small protrusions from the waves -- but they are usually swept away by tides or the next squall. But this island is something else; its 11 acres (250 at low tide) are still intact after weathering another fierce storm, cyclone Xynthia, earlier this year. Locals call it "l'ile mysterieuse" -- "the mysterious island," after the Jules Verne novel -- but it remains officially unnamed, and does not appear on any maps.

But scientists have ventured out to the island, watching fascinated as plants, birds, insects, and other life forms colonize its pristine shores. According to an article in The Guardian today:

"So far, we've recorded the appearance of 12 different plant species, and some 30 invertebrates, of which about a third have a sustainable existence on the island," said Jean-Marc Thirion, an environmental scientist who heads local conservation group OBIOS. "The resident invertebrates feed off the rejections of sea gulls and on tiny flies that themselves are finding food in the clumps of sea rocket," he added.

Thirion has even discovered spiders, which he deduces were wind-born, and ants, probably carried on flotsam.

"You would normally only get the chance to record all these developments with a volcanic creation, and I can't think of anywhere else in Europe where an opportunity like this has occurred in recent history."

There's just one problem: people are so transfixed by the island that tourists are flocking to it. A rave was even held there. Needless to say, this doesn't bode well for newly-established wildlife.

Local activists are struggling to get it protected. But the entire estuary is due to become a protected zone next year, which would include the still unnamed stretch of land.