Rumblings against Christianity at the grass roots level?--not new 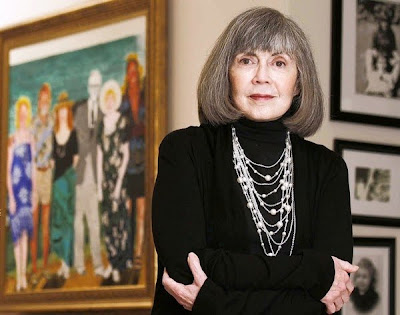 Though overall insignificant, it may nevertheless be a harbinger of a change in Christianity...decades away.

The novelist says she still believes in God, but she couldn't find a basis in Scripture for some positions taken by churches. And she rejects the persecution of gays and women.

Rice spoke to The Times by phone this week from her home in Rancho Mirage.

Q) You were raised Catholic, became an atheist, then returned to Catholicism in 1998. Why are you quitting now? It's not as if the church has suddenly changed.

A) Well, I've been living with this now for 12 years, and I've come to the conclusion from my experience with organized religion that I have to leave, that I have to, in the name of Christ, step away from this. It's a matter of rejecting what I've discovered about the persecution of gays, the persecution and oppression of women and the actions of the churches on many different levels. I've also found that I can't find a basis in Scripture for a lot of the positions that churches and denominations take today, and I can't find any basis at all for an anointed, hierarchical priesthood. So all of this finally created a pressure in me, a kind of confusion, a toxic anger at times, and I felt I had to step aside. And that's what I've done.

Q) Two days before you announced on your Facebook page that you were quitting Christianity, you praised the Lutheran Church for welcoming gay pastors. So why not become a Lutheran, or a member of some other church that shares your views?

Q) The United Church of Christ even started a Facebook campaign to get you to join. How can you say no to that?

A) I respect completely people who want to find a church that's more in accord with what they can morally accept. But for me, walking away is the thing right now. In the name of Christ, in the name of God.

Q) I wanted to ask you about that, because you have said that you quit Christianity "in the name of Christ." From a practical standpoint, what does that mean, how do you follow Christ without a church? Are there rituals that you intend to maintain?

A) I think the basic ritual is simply prayer. It's talking to God, putting things in the hands of God, trusting that you're living in God's world and praying for God's guidance. And being absolutely faithful to the core principles of Jesus' teachings.

Q) You've said that there are rituals of the Catholic Church that you'll miss.

Q) You've written before about your love of churches, even during the time you were an atheist. Do you see yourself going back in a church?

A) Oh yeah, I would certainly go to a church to pray in private as long as nobody there is offended by my presence. You know, when you're brought up the way I was brought up in the Catholic Church, you really remain culturally a Catholic all your life. Your whole approach to art, your whole approach to music, to architecture, to literature, all of this has been shaped by Catholic thinking and the Catholic tradition. So that's not something that you can put aside. I mean, my novels were Catholic novels when I was calling myself an atheist.

Q) Your characters in fiction, you've said, have reflected your own spiritual journey throughout your writing career. What can readers expect now?

A) Well, I want to keep writing about my new hero, Toby O'Dare, and I want to write about the fears and the questions that Toby has even though he's been visited by angels, and even though he's converted. What will he face as he tries to walk the walk? I think now that I've made this, what I consider, morally necessary declaration, there will be a greater freedom to explore those things. And I have another series I'm planning, about immortals. It's a metaphysical thriller idea, but it concerns creatures who have been alive on this Earth for thousands of years, and how they view Christianity. But I haven't even started to write that one yet. There are a lot of wonderful ideas to play with out there when you want to make a series about immortals. Vampires was my first attempt at that, and I'm not going back to that.

Q) That will disappoint some people.

A) When I wrote those novels, I really was an atheist, and I was a pessimistic atheist. And those novels are all about what it's like to live in a very dark world, and a meaningless world, where anything can happen to you and there is no real almighty witness, and I can't go back to that, I don't believe that anymore.

Q) Was there any single moment that led you to say, "I'm done?"

A) There was. There was a last straw. But it's very important to emphasize that it was the sum total of a lot of things. There were some last straws that had to do with papal pronouncements, the pope going to Africa and declaring that condoms were not a good idea and would not help in the AIDS epidemic; the pope standing up in Portugal and saying that one of the most insidious evils faced by the world today is same-sex marriage. You know, we live in a world where genocide and human slavery are realities, and the pope chose to focus on same-sex marriage. That was a moment of, "What in the world am I doing connected to this religion?" But the real last straw, the very last straw, was the bishop of Phoenix, Ariz., Thomas Olmsted, coming out and publicly condemning a nun named Sister Margaret McBride for authorizing a life-saving abortion for a dying mother in a Phoenix hospital. What he said in essence was that she had excommunicated herself by authorizing the abortion, and I could write a book on why I think that was a ruthless and immoral decision.

But you know, again, when we talk about the last straw, we don't want to betray the whole spectrum of things that people have chosen to do in the name of organized religion in our time. There are deep issues with religions and the way they treat the very serious moral problems that people face today with reproductive questions, reproductive rights, questions of family planning, questions of marriage and divorce, questions of how you live a meaningful life in a world where almost every decision you make has some moral implication for somebody else. These are big issues. And the question of how much the decisions of people in organized religion are related to any deep-rooted theology of Jesus Christ, well, that's a real question. You understand my problem?

Q) More than one person has said online that you're doing all this as a publicity stunt because you have a book coming out this fall.

A) That's nonsense. That's a very cliched accusation that's made against authors in particular. I can tell you this: Offending the Christian right in this country is not considered a good career move for anybody, especially not someone who has written two books about Jesus Christ.

Q) You live in Rancho Mirage now. What drew you there? It can't be that it reminds you of New Orleans.

A) (Laughing) No, it doesn't. I moved here really because I want to be in the Los Angeles area, and I really moved here for the weather. My son Christopher suggested it. He said, if you want to live in a place where the sky is blue 350 days out of the year, it's the Palm Springs area. And so I came out here and fell in love with the area. I miss New Orleans terribly. I would love to go back, but there are many, many reasons why I can't do that.

Q) Do you go back for visits?

A) I've not gone back even once, but I'm sure the time will come when I will go. I'm kind of dreading it. It will be very painful. But I love New Orleans....Perhaps sometime in the future I'll be able to do it.
Posted by Mercury at 1:25 PM