The OED in print no more? 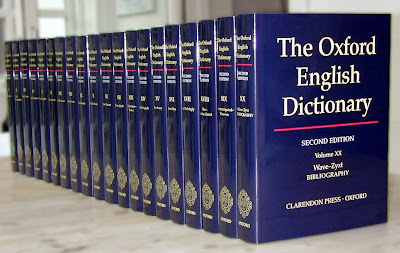 "The Oxford English Dictionary Definitions of ‘Print’ And ‘Digital’"

Wired
The 20-volume Oxford English Dictionary is the bibliophile’s equivalent to the movie geek’s high-end home theater setup. It’s a mighty, totem-like symbol of mystical multiple-shelf-spanning lexicographic power. But when the third edition is completed sometime in the next decade or so, there might not be anything physical on the bookshelves to show off.

That’s at least what Nigel Portwood, chief executive of the Oxford University Press, told the Sunday Times of London. “The print dictionary market is just disappearing; it is falling away by tens of percent a year.” The Times asked if Portwood thought the third edition of the OED would be printed. “I don’t think so,” he replied, adding that he thought print dictionaries in general might vanish completely within 30 years.

On Monday, an OUP spokesman walked Portwood’s statement back, issuing a statement to the Oxford Times:

No decision has yet been made on the format of the third edition. It’s likely to be more than a decade before the full edition is published and a decision on format will be taken at that point. Lexicographers are currently preparing the third edition of the OED, which is 28 percent complete. No final completion date is yet confirmed….

Demand for online resources is growing but large numbers of people continue to buy dictionaries in printed form and we have no plans to stop publishing print dictionaries.
Now, while this statement is designed to slow down alarmed chatter that the print OED will soon be no more, it’s also completely consistent with what Portwood told the Times. Oxford publishes many print dictionaries apart from the OED, such as the one-volume Oxford Dictionary of English, a two-volume Shorter Oxford English Dictionary, and even a microprinted Compact OED that ships with a reading glass, plus many others. They could continue to print any or all of these well into the future, even if the 3rd edition of OED goes digital-only. Indeed, Oxford University Press already offers a basic free online dictionary and subscription version with extra features.

Nor is it possible to say precisely so many years out in which digital format(s) the full OED might appear, even if a print edition is published. The online version of the second edition has offered subscriptions for 10 years, and does a brisk business appealing to both institutions and individuals. They’re even relaunching the site this December, creating a new interface and incorporating material from the new Oxford Historical Thesaurus.

But just as few publishers 10 years ago could have predicted today’s mosaic of electronic publishing options, Oxford can’t know with any certainty what format, print or digital, will be best suited for tomorrow’s readers. You could be reading the OED on your 1TB Kindle or sitting inside a virtual 3-D holograph generated by your AwesomeBox MagicLantern, for all we know. So saying “no decision has yet been made on the format” means the opposite of “we will absolutely publish a print 3rd-edition OED.”

If the OED does go digital-only, we could imagine a scenario in which the 2nd edition print volume becomes a still-used legacy reference set for institutions who don’t want to upgrade, like Windows XP’s been for desktops. It might even take on additional cachet, like a vintage record collection and analog stereo system. These are all good things. A new printed edition would be wonderful, too.

I think, though, that when subscribers see the new web version, already augmented by data that can’t be found in the printed 2nd editions, they may not think that the OED’s digital future looks bad at all.
Posted by Mercury at 9:29 AM

I have a complete Oxford English Dictionary with two supplements: 1933 edition reprinted in 1961 (Clarendon Press). When I bought it--years ago, the first word I looked up was sabotage.
SABOTAGE is not in my version! Any idea why? Some kind of inner-OED sabotage??
Linda Durham
lindalavega@aol.com