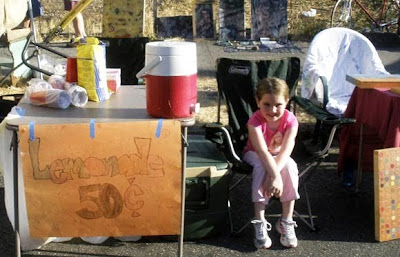 This happens all too often where laws of reasonable intent conflict with tradition. For many years my State Fair was a joy to attend: Events, games, sampling of homemade farm goodies. Not now. The state has intervened and stopped virtually all homemade farm products for sampling and sale. They claimed "public health issues". Odd, I don't recall, in the fair's history, any related illnesses.

The Associated Press
After a county inspector squeezed out a kid's lemonade business, so many Oregonians puckered up in disgust that the county chairman had to pour on a little sugar.

The apology sweetened up some sour feelings and made 7-year-old Julie Murphy eligible to resume selling her Kool-Aid and water concoction for 50 cents a cup.

Last week at a local arts fair, Julie and her mother were surprised when a county inspector asked to see their restaurant license.

They didn't have one. The inspector told them they would face a fine of up to $500 if they didn't stop selling lemonade.

Ultimately, Julie and her mother packed up the stand, and as Julie left the fair she was crying.

But Julie has prevailed.

Jeff Cogen, chairman of Multnomah County, says the health inspectors were "just following the rule book" but they should have given the girl and her mom a break. On Thursday, he talked with Julie's mom to apologize.

"A lemonade stand is a classic, iconic American kid thing to do," Cogen told The Oregonian. "I don't want to be in the business of shutting that down."

And how does Julie feel about this?

Her mother, Maria Fife, said she and her daughter appreciates the apology.

But the sweet and sour tale of lemonade stands at the Portland art fair might not yet be over.

According to the Oregonian, one vendor at the local arts fair is planning a "lemonade revolt" the next time the fair is held — later this month.

Cogen says he doesn't know what he'll do if a bunch of fair vendors try selling lemonade without a license.

As it turns out, lemons may present county officials with something of a pickle.
Posted by Mercury at 7:07 AM