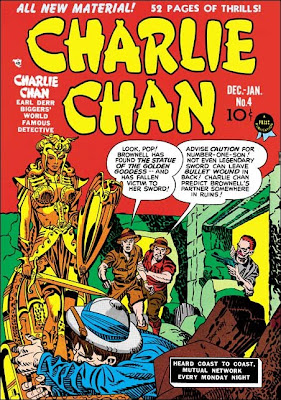 The New York Times
To many Asian-Americans, Charlie Chan is an offensive stereotype, a sort of yellow Uncle Tom. Chan, the hero of six detective novels by Earl Derr Biggers and 47 Hollywood movies between 1926 and 1949, not to mention a 1970s Hanna-Barbera cartoon series, is pudgy, slant-eyed and inscrutable, and he speaks in singsong fortune-cookie English, saying things like, “If befriend donkey, expect to be kicked.” The California-born author and playwright Frank Chin, who has written essays denouncing Chan, would like to see him disappear altogether.

But Yunte Huang, who was born and grew up in China, can’t get enough of Chan and has written a book about his obsession: “Charlie Chan: The Untold Story of the Honorable Detective and His Rendezvous With American History.” The book, which comes out from Norton next week, is part memoir, part history, part cultural-studies essay and part grab bag of odd and little-known details.

Biggers, who overlapped at Harvard with T. S. Eliot but did not exactly share his literary taste, said he got the idea for Chan while sitting in the New York Public Library in 1924 and reading about a real-life Honolulu detective named Chang Apana. Mr. Huang suggests that Biggers may have misremembered the details, but there is no doubt that Apana was the model for Chan, and Mr. Huang gives a full account of a life that was in many ways more interesting than the fictional version: born in Hawaii to Chinese parents, Apana moved to China and then back to Hawaii, where despite being virtually illiterate, he rose in the detective ranks of the Honolulu police. He wore a cowboy hat, carried a bullwhip and was said to leap from rooftop to rooftop like a human fly.

Mr. Huang gives an equally full account of Chan’s movie history and of the actor with whom he was most memorably associated: a Swede named Warner Oland, who played a Jew in the first talkie, “The Jazz Singer,” and then, because he had vaguely Asian features, made a specialty of Oriental villains. (The original Chan, George Kuwa, was Japanese.) Oland was a heavy drinker, Mr. Huang writes, and liked to take a nip before slipping into the Chan persona: it slowed down his speech and put a congenial, Chan-like grin on his face. In 1938, after Oland had boozed himself to a premature death and was replaced by an American named Sidney Toler, movie producers encouraged him to try the same trick.

But the most interesting story in “Charlie Chan” is Mr. Huang’s own. “I have an alphabetic destiny,” he said, laughing, over lunch in Chinatown last week. In the late 1980s he had been a student at Beijing University and, after the protests in Tiananmen Square in 1989, where he would have been on the day tanks opened fire if his parents hadn’t lured him home on a false pretense, he determined to leave China. He got hold of a guidebook to American colleges, and “Alabama starts with A,” he pointed out. “I was pretty desperate to get out of the country and the University of Alabama was the first school I looked up.” He added that when he got there, “Tuscaloosa was another planet,” and went on: “Nobody walked in the street. Everything was so slow, so clean and so empty.”

When he got sick of the South, Mr. Huang said, he decided to go to Buffalo for a Ph.D. in English literature. He felt, he writes in “Charlie Chan,” “like a bottom-feeding fish, one that cannot see the light of day in the muddy pond of America.”

But why Buffalo? “Buffalo begins with B,” he said, grinning. He worked as a delivery boy there, but happily gave up the restaurant business. “Graduate school is really easy compared to restaurant work,” he pointed out.

At an estate sale he bought a couple of Biggers’s novels and was immediately hooked. He began renting all the Chan movies he could find.

Mr. Huang, who is 41, divorced and the father of a young daughter, speaks nearly perfect, idiomatic English. He learned the language, he said, from listening to Voice of America broadcasts with his family and also from going to church in Tuscaloosa. “On Sunday morning I’d stand on the corner carrying a Bible,” he explained, “and people would stop and ask what church I was going to. ‘Yours,’ I’d say. I saw a lot of churches that way.”

After Buffalo he spent four years teaching literature at Harvard, in Cambridge, Mass., before taking a job at the University of California, Santa Barbara, and next year he has a fellowship at Cornell. “I’m kind of stuck in the C’s right now,” he said, “and I can’t really move on. “Charlie Chan — that’s a double C.”

Chan was an obsession he pursued for years, he said, while trying to write a memoir called “The Yellow Alabaman” until a friend encouraged him to put that book aside and write instead about the detective. It was the aphorisms, the fortune-cookie sayings, that first attracted him, and then he became interested in the way Chan is a projection of American fears and American imaginings about China — an embodiment, as he writes in the book, of “both the racist heritage and the creative genius” of his adopted nation’s culture.

Over lunch he said: “I grew up watching Chinese opera, where you have some of that same exaggeration, and growing up in that literary culture was very useful for understanding cultural ventriloquism and the whole idea of crossing over. It was fascinating to see how Chan was a sort of ‘yellowface’ performance.” He added that in the 30s the Charlie Chan movies were immensely popular in China, of all places, where they were seen as an antidote to the sinister caricature of the Fu Manchu films, but that attitudes had changed. Not long ago he was discussing with a Chinese publisher the possibility of translating “Charlie Chan” himself and bringing it out in China. The publisher listened politely and said, “Right now we’re actually more interested in Fu Manchu.” 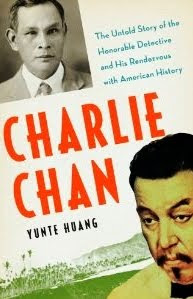 Charlie Chan: The Untold Story of the Honorable Detective and His Rendezvous With American History

"Mind must be like parachute...must be open to function"--Charlie Chan
Posted by Mercury at 10:18 AM

so, how did you like the book itself? thanks! -YH

Sorry to say that I have not read your book. Budget restrictions prohibited the purchase and my libraries have yet to order same as per my notification.