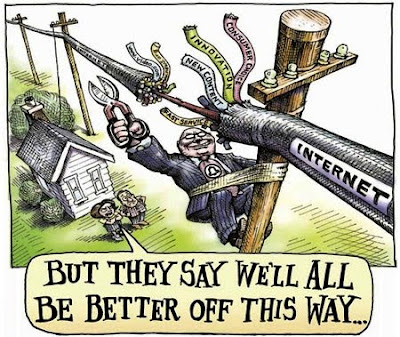 "The Truth About Google, Verizon and Net Neutrality"

eWEEK.com
News Analysis: The New York Times and other publications failed in their journalistic mission to tell the truth about the potential Google-Verizon deal. Here's what an agreement between the two could mean for net neutrality.

It's true that there's something going on between Google and Verizon regarding net neutrality, but it's not a business deal. While neither company is commenting specifically on what their discussions have been about, the information Google and Verizon provided makes the direction pretty clear.

The bottom line is this: Google would like to see network providers make provisions for certain types of traffic so that it can be delivered in a useful manner. Google is talking to Verizon because its FiOS service is very hot these days and provides very high-speed networking where consistent delivery is important for things like video.

This means that Google is looking for a way to have material such as video and voice services delivered with their priority set so that the material is still useful when it gets delivered. For example, if voice traffic suffers from too much latency or jitter in transit, it's nearly unintelligible to the listener. You've probably heard this kind of thing on a Skype call if you were on a bad connection or on a cell phone call when the cell user had a really crummy signal.

With video, delivery is also important, although interestingly it's not as sensitive to issues such as latency as voice. But when video doesn't get the delivery it needs, then you see the picture simply stop, or you see it dissolve into those blocks that you sometimes also see on your HDTV when an airplane flies over your antenna in just the right spot. But for reasons I won't go into here, our brains can deal with more interruption to video than to audio.

In either case, reliable delivery is important for these services to be usable. Google's belief, according to a statement made by CEO Eric Schmidt during an impromptu news conference on Aug. 4, is that network providers should be able to differentiate service types so that voice traffic gets delivered intact, for example, but not prioritize one provider's voice or video over another's.

If this sounds familiar it's probably because you're doing that in your enterprise already. You call it QOS (quality of service), and it's a critical feature for some types of traffic, especially the voice traffic that is handled by your VOIP (voice over IP) phone system. What Schmidt is suggesting is that Internet providers do the same thing.

Verizon, for its part, is also denying any sort of business deal with Google. More likely the two companies are hammering out a way to provide the priority some streaming traffic needs while remaining within the bounds of net neutrality. As eWEEK Senior Staff Writer Clint Boulton mentions in his story about the supposed Google-Verizon deal, both companies deny that anything nefarious is going on.

In fact, there's little to be gained by either company in setting up some sort of exclusive deal for Verizon to deliver Google's traffic in preference to other traffic. It would cost Verizon more money, and it's hard to see how the company would benefit. Google, meanwhile, doesn't really need more than it has now in terms of delivery, although it would probably help YouTube's video quality to get the video stream delivered reliably. But this is true for every ISP, not just Verizon, so setting up a deal just with Verizon wouldn't really help Google, either.

Instead, what will come out of the net neutrality discussions between the companies is an agreement in principle that network providers should be allowed to honor the priorities set for streaming traffic, as long as they do it for everybody. This doesn't give YouTube any kind of benefit over another video provider—after all, setting QOS levels on video or voice packets is hardly rocket science, and it doesn't take anything special in terms of equipment or software. All that's really required is a general agreement that it's OK, and for network providers to provision their routers to honor the priority settings.

So how did The New York Times manage to make this into a threat to net neutrality? It appears that the reporter was swayed by a single advocacy group, Public Knowledge. The group's claims regarding net neutrality have always been at the extreme end of the hard line, and the quotes in the Times article are no exception.

What's harder to understand is how a journalist could base a story on unsubstantiated claims from a single group with a stake in the outcome of the article. But The New York Times has always been fairly inept when it comes to covering technology, and its understanding of the issues involving net neutrality has been tenuous at best. In other words, we've gone through two days of kerfuffle based on sloppy reporting, lazy journalism and technology coverage from a publication that doesn't understand technology.

I should also add that apparently The New York Times doesn't actually understand the technology business, either. A key point in its story is the relationship between Google and Verizon because of its Droid devices that run Google's Android operating system. The problem with this is that there is no relationship between the two companies here. Verizon Wireless, which sells the Android devices, is a separate company. It's a joint venture between Verizon and Vodafone, and Verizon (the phone company) has no operational role in Verizon Wireless. You'd think that even a really junior reporter would take the trouble to learn this.

The bottom line is that all of this gnashing of teeth has had only one useful result, which was prodding the FCC to call off its secret talks about net neutrality. The fact that everything else about this story was just plain wrong doesn't make this right, but it was still a good outcome. The FCC should be public and upfront in its discussions about net neutrality. And meanwhile, The New York Times should stick to covering the New York social scene, where it has some expertise.
Posted by Mercury at 5:01 PM