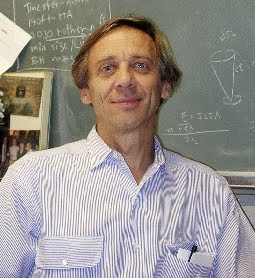 San Francisco Chronicle
UC Berkeley astronomer Don Backer, who pioneered the use of radio telescopes to study phenomena as varied as flashing neutron stars and the black hole in the Milky Way's center, died July 21 after collapsing outside his Berkeley home. He was 66.

He was a member of the university's astronomy department for 35 years and directed its Radio Astronomy Laboratory for the past two years.

A visionary scientist, Dr. Backer was an expert in designing instruments that made possible modern radio astronomy. He was known worldwide for discovering a class of neutron stars known as pulsars, which rotate so swiftly their light shines like beacons flashing in thousandths of a second and rival the precision of atomic clocks.

Backer was born in Plainfield, New Jersey. He attended Cornell University, where he earned a Bachelor of Science degree in engineering physics from Cornell University in 1966. He received a Master of Science degree in radio astronomy from Manchester University in 1968, and then returned to Cornell to earn his doctorate in astronomy in 1971. Backer then took post-doctoral positions first at NRAO in Charlottesville, Virginia, and then at NASA/GSFC in Greenbelt, Maryland. In 1975, Backer moved to the University of California, Berkeley as a research astronomer in the Radio Astronomy Laboratory, and became professor of astronomy at Berkeley in 1989.

Backer has done a lot of work in the field of pulsars. Aside from the first millisecond pulsar, PSR B1937+21, Backer was also involved in the discovery of a Jupiter-sized planet around PSR B1620-26, thought to be the oldest known extrasolar planet. Related to his work on pulsars, Backer has worked with the Pulsar Timing Array to try to detect gravitational waves from rapidly rotating neutron stars, and to try to set limits on the gravitational wave background of the universe. More recently, he has also been working on studying the epoch of reionization, leading a collaboration between the University of California, Berkeley, the University of Virginia, the University of Pennsylvania, and NRAO called the Precision Array to Probe the Epoch of Reionization.
Posted by Mercury at 9:37 AM