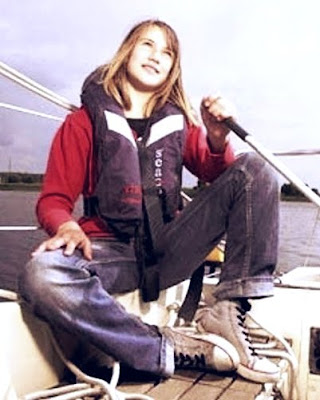 Wired
Just two months after Abby Sunderland, a 16-year-old from Southern California, was rescued from a failed attempt to become the youngest person to sail solo around the world, a 14-year-old from the Netherlands has also set her sights on that crown.

Laura Dekker, along with her father Dick, set off from her home country and plans to reach Portugal in a few weeks. From there, she will proceed alone and she has until September 2012 to circumnavigate the planet and become recognized as the youngest person to do so.

“We want to be sure that the boat is completely ready, so this is the last test sail,” Dekker told reporters moments before hitting the open water in Guppy, her 38-foot-long boat. “Since I was eight years old, I wanted to sail around the world. And when I was 10, I was really sure I wanted to sail off, but my parents didn’t approve it.”

Dekker’s years of focus on attempting a feat so daring and dangerous has again brought the question of “how young is too young?” to the forefront of competitive sailing, just weeks after Sunderland had to be intercepted by a French fishing vessel. The rough, choppy waters of the southern Indian Ocean had forced her to activate multiple on-board emergency beacons after her 40-foot vessel, Wild Eyes, became disabled.

Elisabeth Guthrie, an associate clinical professor of psychiatry and pediatrics at Columbia University Medical Center, agrees that the rise of celebrity culture over the past 30 years has made a discernible impact on how children push their parents to let them attempt stunts that were once never even fathomed.

“In general, teenagers are not the best assessors of risk,” Guthrie told Wired.com. “While there are exceptions to every rule, classically, adolescents minimize risk and exaggerate their abilities.”

And while the impetus for any such feat might spring organically within the child’s mind, parental involvement and support has to be a critical component in seeing these achievements approach any level of fruition. “The more you become invested in a particular goal, the harder it is to pull out of that,” Guthrie said. “Parents want the best for their children, and when kids get excited about the possibility of achieving a certain thing, parents can often get very caught up in that.”

It’s a pattern of behavior evident in Sunderland’s family, as well. A year ago, Abby’s older brother Zac became the youngest person to sail solo around the world, the first under 18 to do so. When his record was snapped a month later, Abby’s efforts to keep the record in the family name were ramped up and she set sail this past January. When Abby, who chronicled her journey on her personal blog, failed to escape the waters of the Indian Ocean, a torrent of criticism came fast at the Sunderland family.

Dekker, for her part, has also shown considerable web savvy in garnering attention and publicity for her record attempt. She has her own personal website, which will provide updates on her voyage, and a Facebook support page set up for her fans.

Interestingly enough, Sunderland herself — even after her rescue ordeal — has openly expressed her support for Dekker’s attempt to do what she couldn’t:

I admire Laura’s spirit — it would be hard not to for anyone who has followed her story. I’d just like to wish Laura the best of luck and a word of advice from a sixteen year old sailor (though I doubt she needs it) have fun! Live life the best you can. There’s no time like now so take all the opportunities you get.
Still, Dekker is just 14 years old and coming off of a prolonged battle with the Dutch court system to even allow her to attempt the sail. With all the impending pressure, now that her plan has been given the green light, there’s a chance that she may not realize fully what it is she’s asked for.

“I would worry very much about the dangers — both physical and psychological — for a teenager going out there,” Guthrie said. “While there are clearly exceptions where youngsters achieve miraculous things — like winning a gold medal or sailing around the world — there are many that don’t turn out with a happy ending.”

Abby Sunderland knows that all too well.