"The Disappearing Spoon"...a new book on the periodic table 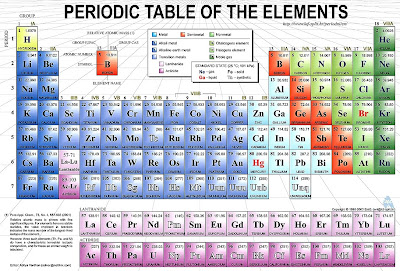 The New York Times
On the one hand, as Sam Kean points out at the start of “The Disappearing Spoon,” the periodic table of the elements is a clear, accessible-looking chart that ought to make sense to anyone who ever set foot in a chemistry classroom. On the other, many a would-be chemist has found it as impenetrable as it is alluring.

“People remember the table with a mix of fascination, fondness, inadequacy and loathing,” Mr. Kean writes in the book, a work of chatty popular science that means to rekindle affection for the table and its many mysteries.

Though he is obviously quite knowledgeable about chemistry, Mr. Kean knows that “probably the biggest frustration for many students was that the people who got the periodic table, who could really unpack how it worked, could pull so many facts from it with such dweeby nonchalance.” Mr. Kean’s book means to override that frustration by making some of those facts available to anyone.

Here is what “The Disappearing Spoon” does not do: really unpack how the periodic table works. Nor does it provide clear and consistent illumination about, say, what electrons do in s-shells versus what they do in p-shells, let alone in the more daunting d-shell configuration. Inevitably some of what he discusses will be out of reach for the lay reader. And Mr. Kean does not have the teacherly patience of Brian Greene, a science writer who can make string theory sound like child’s play.

What Mr. Kean does have is a big supply of odd facts and anecdotes related to the periodic table. He uses these to turn “The Disappearing Spoon” into a nonstop parade of lively science stories. Here is a book that shows off the longest chemistry-related anagram ever written, the 1,185-letter technical term for “tobacco mosaic virus”; gives an explanation of why the element europium makes the euro note “the most sophisticated piece of currency ever devised”; and tells of a purported C.I.A. plan to poison Fidel Castro by putting thallium in his socks.

Such factoids might seem more specious if the periodic table were not such a familiar and popular scientific artifact. But elements are the new dinosaurs: they’re available via placemats, posters, T-shirts, a fine coffee-table book (“The Elements”), a 3-D app for mobile devices and, of course, that heavenly old Tom Lehrer song (also called “The Elements”) speedily set to its Gilbert and Sullivan melody. In this bustling atmosphere “The Disappearing Spoon” is a timely conversation piece, what with chapter headings like “Take Two Elements, Call Me in the Morning” (about elements used for medical purposes) and “Poisoner’s Corridor: ‘Ouch-Ouch.’ ”

Mr. Kean clearly knows that his stories and insights require a very user-friendly presentation. So he begins this book by describing his own boyhood fascination with mercury. He refers to loose mercury as “supple spheres,” a “silver lentil,” “futuristic metal” and “a pecan-sized glob,” illustrating this book’s eagerness to present elements as slangily, irreverently and colorfully as possible. Here is the place to find about how mercury laxatives were carried on the Lewis and Clark expedition, and about how the expedition’s route could thus be tracked by the mapping of mercury-tinged latrines.

Mr. Kean also makes the excellent point that he learned about history, etymology, alchemy, mythology, literature, poison forensics and psychology all by studying extensive mercury lore. That offers some indication of how sprawling and scattershot “The Disappearing Spoon” turns out to be. For instance, Mr. Kean goes out of his way to provide elements with outsize personalities. Antimony has “probably the most colorful history on the periodic table,” and draws upon Mr. Kean’s most exotic-sounding reference book (“The Triumphal Chariot of Antimony,” written by Johann Tholde in 1604). Carbon “latches onto virtually anything” and is thus notable for its “promiscuity.”

Tungsten was “the ‘it’ metal of the Second World War” because of its use in weaponry. Element No. 43, now known as technetium, has been discovered on so many separate occasions, and given so many names, that “it’s the Loch Ness monster of the elemental world.”

Mr. Kean devotes as much attention to the personalities of scientists as he does to those of elements. “The Disappearing Spoon” tells many tales of how future Nobel laureates made their great discoveries, and calls Glenn Seaborg and Al Ghiorso “the Ernest Hemingway and Theodore Roosevelt” of the periodic table because they bagged so many specimens. (Seaborg and his Berkeley colleagues came up with the structure of the periodic table that is commonly used today.)

Then of course there is Dmitri Mendeleev, the 19th-century Russian innovator who came up with the idea of arranging elements in a chart in the first place and prompted his czar to ignore the great scientist’s bigamy, saying: “I admit, Mendeleev has two wives, but I have only one Mendeleev.” A couple of paragraphs after Mr. Kean tells this story, he somehow segues into a discussion of gallium, which looks like a solid metal at room temperature but melts into a puddle if held in the hand, giving rise to the disappearing spoon trick of the title.

No serious chemistry text could make so drastic a leap so easily. But leaps are the specialty of “The Disappearing Spoon”; this book is more notable for its gymnastics than its coherence. The reader winds up able to explain why Paul McCartney was once awarded a rhodium record, why Gyorgy Hevesy put radioactive lead in his landlady’s goulash, and why Mark Twain envisioned a sci-fi Satan made of radium. Just don’t expect to understand cold fusion when Mr. Kean’s ebullient tale telling is over. 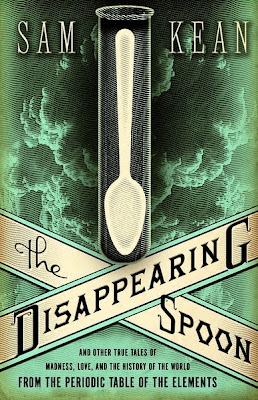 The Disappearing Spoon: And Other True Tales of Madness, Love, and the History of the World from the Periodic Table of the Elements

Interesting... I'm sure that those who love chemistry will love it ... Good job !