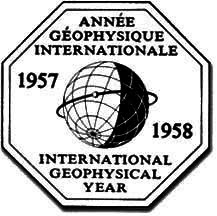 Following a suggestion by NAS member Lloyd Berkner, the International Council of Scientific Unions in 1952 proposed a comprehensive series of global geophysical activities to span the period July 1957-December 1958. The International Geophysical Year (IGY), as it was called, was modeled on the International Polar Years of 1882-1883 and 1932-1933 and was intended to allow scientists from around the world to take part in a series of coordinated observations of various geophysical phenomena. Although representatives of 46 countries originally agreed to participate in the IGY, by the close of the activity, 67 countries had become involved.

International organization and funding of the IGY were overseen by the International Council of Scientific Unions (ICSU), an independent federation of international scientific unions. A Special Committee for the IGY (CSAGI, an acronym derived from the French) was formed to act as the governing body for all IGY activities. Care had been taken to ensure that CSAGI would remain nonnationalistic, apolitical, and geared toward a scientific agenda.

American participation in the IGY was charged to a US National Committee (USNC) appointed in March 1953 by the NAS. Joseph Kaplan, Professor of Physics at UCLA, was appointed Chairman of the USNC. Physicist Alan H. Shapley of the National Bureau of Standards (NBS) was appointed Vice-Chairman, and Hugh Odishaw, also of the NBS, was appointed Executive Secretary (later, Executive Director). The core USNC was made up of sixteen members, but the five Working Groups and thirteen Technical Panels that operated under it eventually drew in nearly 200 additional scientists. The technical panels were formed to pursue work in the following areas: aurora and airglow, cosmic rays, geomagnetism, glaciology, gravity, ionospheric physics, longitude and latitude determination, meteorology, oceanography, rocketry, seismology, and solar activity. In addition, a technical panel was set up to attempt to launch an artificial satellite into orbit around the earth.

IGY activities literally spanned the globe from the North to the South Poles. Although much work was carried out in the arctic and equatorial regions, special attention was given to the Antarctic, where research on ice depths yielded radically new estimates of the earth's total ice content. IGY Antarctic research also contributed to improved meteorological prediction, advances in the theoretical analysis of glaciers, and better understanding of seismological phenomena in the Southern Hemisphere.

Given the state of science in the late 1950s, the timing of the IGY was highly opportune. Research technologies and tools had advanced greatly since the 1930s, allowing scientists a scope of investigation without precedent. Cosmic ray recorders, spectroscopes, and radiosonde balloons had opened the upper atmosphere to detailed exploration, while newly developed electronic computers facilitated the analysis of large data sets. But the most dramatic of the new technologies available to the IGY was the rocket. Post-World War II developments in rocketry for the first time made the exploration of space a real possibility; working with the new technologies, Soviet and American participants sent artificial satellites into earth orbit. In successfully launching science into space, the IGY may have scored its greatest breakthrough. Overall, the IGY was highly successful in achieving its goals, which were summed up in an NAS IGY Program Report:

...to observe geophysical phenomena and to secure data from all parts of the world; to conduct this effort on a coordinated basis by fields, and in space and time, so that results could be collated in a meaningful manner.
Bill Ashworth wrote in the Linda Hall Library Newsletter...

The International Geophysical Year began on July 1, 1957, and ran through Dec. 31, 1958. The IGY, as it was usually called, was an international scientific effort to bring the study of the earth into the age of rockets and radar. One of the most visible results was the successful launching of the first earth satellites, initially by the Soviet Union in 1957, and then by the United States in 1958. While these are often seen as political efforts, in fact the purpose of the first space flights was to gather scientific data about the earth and the atmosphere. For example, Explorer 1, the United States first successful satellite, discovered the Van Allen Radiation Belts surrounding the Earth, which was one of the more dramatic scientific highlights of the entire IGY. The IGY was modeled on two predecessors, the International Polar Years of 1882-83, and 1932-33, so it is not surprising that the Poles were important focal points for the IGY. Antarctica was the more prominent beneficiary, as nearly all of the still-existing Antarctic scientific stations were set up at this time, such as France's Dumont d’Urville Station (est. 1956; see these notices for Jan. 20, 2010), England's Halley Station (1956), and McMurdo Station of the United States (1956; see these notices for May 26, 2010). The Sun was another object of study; indeed, the year 1957 was chosen because it coincided with the so-called Solar Maximum, when sunspot activity was at its highest. Perhaps the greatest byproduct of the IGY was the creation of international data banks; most of the data from the IPY project of 1932-33 was lost before and during World War II. The directors of the IGY ensured that all of the information gained during the IGY was stored in multiple date sites, to which all nations had, and still have, access. 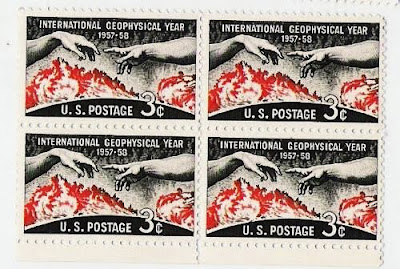 Like many nations participating in the IGY, the United States issued a postage stamp commemorating this scientific undertaking. The following information is quoted from the Post Office Department’s press release announcing the issuance of the stamp:

The United States program in the International Geophysical Year is under the direction of the National Academy of Sciences.

Superimposed above the solar disc and the fiery solar prominences emanating from it is a segment of Michaelangelo’s [sic] famous fresco ‘The Creation of Adam.’

Ervine Metzl, the designer of the stamp, explained that ‘In the small confines of a postage stamp we have endeavored to picture a man’s wonder at the unknown together with his determination to understand it and his need for spiritual inspiration to further his knowledge.’

Across the top of the stamp is the wording ‘International Geophysical Year 1957-1958,’ arranged in two lines, and across the bottom is ‘U.S. Postage 3c.’ All the lettering is in white-face Gothic.

The stamp will be printed on the Giori rotary sheet-fed press, in two colors, black and orange, and perforated on a L-type machine. The stamp will be 0.84 by 1.44 inches in dimension, arranged horizontally, and issued in sheets of 50 with an initial printing of 120,000,000 authorized.

And, the engraver was R. M. Bower. 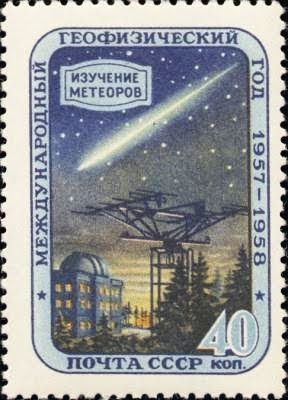 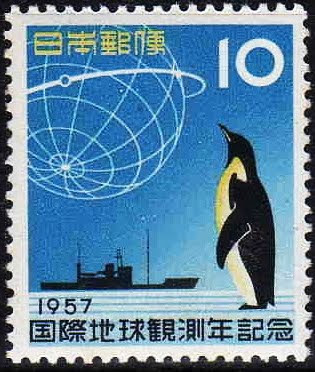 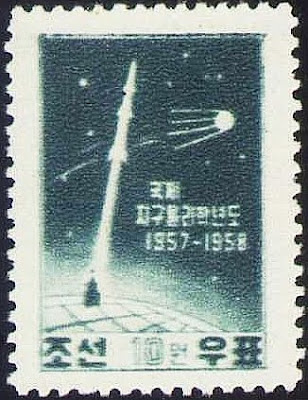 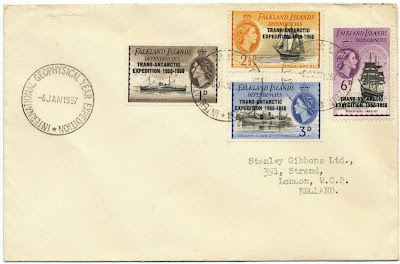 For the International Geophysical Year 1957, the Royal Society established a research station in the Antarctic and named it Halley Bay.
Posted by Mercury at 10:03 AM