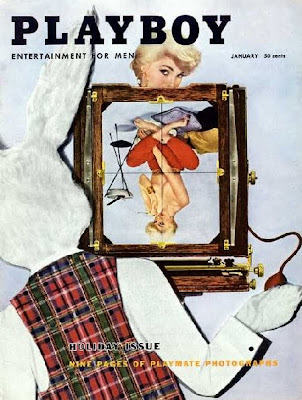 Founder of the struggling adult publishing empire, in an effort to reassert control, proposes to buy all outstanding shares he doesn't own. But rival Penthouse's owner is preparing a competing bid.

Los Angeles Times
Hugh Hefner is 84, but he isn't about to go quietly into the night.

Faced with a tepid stock price and growing pressure from Wall Street, Hefner startled the media world Monday by announcing a bid to reassert control over Playboy Enterprises Inc., the struggling adult publishing empire he founded in Chicago more than five decades ago.

The proposed deal to buy all outstanding shares Hefner does not own would be financed by a Michigan-based private equity fund called Rizvi Traverse Management and would value Playboy at about $185 million, or 40% more than it was trading for at market close Friday. On Monday, shares rose $1.61 to $5.55.

But Hefner's bid could also serve to put the iconic publisher into play.

Marc Bell, chief executive of FriendFinder Networks Inc., which owns the rival Penthouse adult franchise, said he was readying a competing bid for Playboy. And given the active interest among several potential suitors last year, it is possible other bids might emerge, analysts said.

"We always knew it would be a good fit [with FriendFinder]," Bell said.

Bell and other potential bidders can expect a fight from Hefner, whose sybaritic lifestyle in his Holmby Hills estate belies a fierce reluctance to cede control of the company he built from scratch.

Hefner is famous for his eccentricities: conducting business from bed in silk pajamas and cavorting in his mansion with girlfriends who could be his great-granddaughters.

But he also exerts tight control over the production of his increasingly anachronistic magazine. After protracted negotiations, he blocked competing bids last year from a brand management company called Iconix Brand Group Inc. and a former Playboy executive that might have fetched as much as $300 million.

Hefner owns 69.5% of Playboy's Class A common stock and 27.7% of its Class B common stock. The Class B shares outnumber the Class A variety almost 6 to 1. But the Class A shares are the only ones that vote, giving Hefner unquestioned control.

Playboy said in a statement that Hefner told the board of directors he was not interested in any sale or merger of Playboy and was not talking with other partners besides Rizvi. The reason, he said, was that he was interested in preserving the Playboy brand, its legacy and the editorial direction of the magazine.

But Bell contended in an interview that despite Hefner's voting control, the board had a fiduciary duty to consider competing offers.

Playboy spokeswoman Martha Lindeman said the company had no comment on Bell's avowed interest in making a bid.

What's been clear since the Iconix bid last year, however, is that many investors see big potential in the Playboy franchise, despite years of losses at the flagship Playboy magazine and the rise of fierce competitors for advertising in the digital era.

Since media veteran Scott Flanders replaced Hefner's daughter, Christie, as chief executive in 2009, the company has been outsourcing operations and shedding employees to transform itself from a publisher into a brand management company.

Flanders has transferred the production of the flagship magazine to American Media, the publisher of the National Enquirer, and has struck a deal with IMG Licensing Worldwide to manage licensing of the rabbit-ears brand in Asia. Flanders has said he is seeking similar partnerships to help add scope and critical mass to Playboy's TV and video operations as well.

Lindeman said Flanders wouldn't comment on the Hefner bid Monday, but he clearly believes the company is undervalued. In a recent conference call with investors, Flanders said, "Today you could own the company for an enterprise value of $200 million, and we believe we have a billion-dollar brand," Bloomberg News reported.

Hefner seems to also believe Playboy's future is tied to managing the brand and providing content for others to distribute. In a New York Times Magazine interview Sunday, Hefner talked about the shift. Playboy magazine's circulation is about 1.5 million, compared with more than 7 million in the 1970s.

"Certainly in Playboy's case they make money by being in other businesses," Hefner said. "To begin with, it was the magazine that carried the brand; now the brand carries the magazine."

Some investors believe Hefner is in the way of maximizing the potential of the Playboy brand. One investor, who asked not to be named while the proposal is pending, said Hefner has insisted on keeping the magazine afloat despite its ongoing losses and has clung to the Playboy mansion in Los Angeles, even though it could be sold for many millions of dollars.

"It's one of the best-recognized brands in the world, especially in Asia," the investor said. "If managed properly you could put it on anything."

Hefner's partner in the bid, Rizvi Traverse Management, is a private equity firm based in Birmingham, Mich., but it has focused much of its energy on Hollywood and entertainment. It has a stake in the studio Summit Entertainment and owns part of talent agency International Creative Management.

Hefner's statement did not spell out the terms of his partnership with Rizvi or how much control he would retain.

"Hef should have his way with Playboy shareholders"

Reuters
No executive satisfies his desires to a greater degree than Hugh Hefner. For half a century the 84-year-old founder of Playboy magazine has cultivated the image of a man who lives life to its libidinous fullness. So it’s reasonable to expect that Hef, now in his twilight, will succeed in having his way with yet one more constituency — his shareholders.

Hefner is offering to buy the 66 percent of the nudie-magazine empire not in his clutches, thereby closing his smoking jacket on public markets and taking the company private. At a 40 percent premium, Hef’s entreaty of $5.50 a share doesn’t look terribly bare, particularly considering Playboy’s $51 million of losses in its last fiscal year.

But the price is closer to Playboy’s initial offering price in 1971 than its all-time high of $32 reached 11 years ago. That performance reflects the steady decline of Playboy’s brand of adult entertainment, or looked at another way, its failure to keep up with sliding standards in decency. Given the efflorescence of seemingly limitless, and free, Internet pornography, Playboy’s relatively tame offering looks downright quaint.

Under new management, Playboy might just achieve its stated goal of “enhancing connection to the 18-34-year-old target market” — the demographic Hef reached successfully in December 1953 with the first issue’s swimsuit snapshots of Marilyn Monroe.

Ironically, though, that’s unlikely to happen because Hef doesn’t appear keen to take Playboy down-market. Playboy’s board warned investors that Hefner’s concerns about the brand, the magazine’s editorial direction and its legacy mean he’s not interested in selling to anyone else.

He has the votes too. The company’s Class B shares — its most widely traded and abundant form of capital — carry no say. Hefner owns 69.5 percent of the voting Class A shares. As Playboy’s annual report made plain in March, Hefner may choose to do things other shareholders don’t agree with.

What Hef wants, he usually gets. It won’t be any different with his company.


H. Hefner...huge impact on society and human sexuality
Posted by Mercury at 8:12 AM