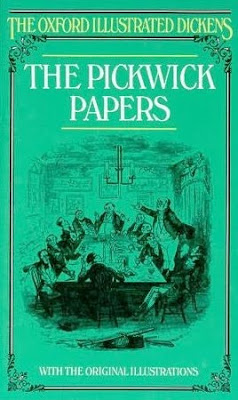 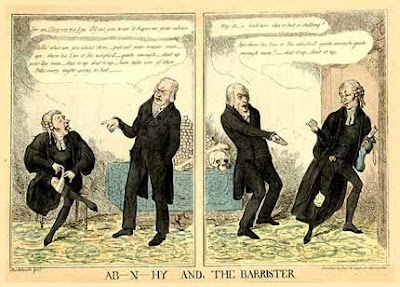 We are all familiar with Charles Dickens and his more popular works...A Christmas Carol, A Tale Of Two Cities, David Copperfield, Great Expectations, Oliver Twist in film and some of the more obscure titles provided by PBS/BBC...Bleak House, Little Dorrit, Our Mutual Friend, and The Old Curiosity Shop. But Pickwick Papers has not been offered in film. [It is possible that the old British film studio Gainsborough Pictures may have done so.] Nevertheless, Pickwick Papers is marked by a fine detail regarding the illustrator...a curious and sad piece of trivia, but it has a happy ending--sort of.

London museum unveils gravestone of Robert Seymour, the artist who killed himself after 'being dropped' by Charles Dickens

guardian.co.uk
The scene on 20 April 1836 was horrific: the artist lay in a welter of gore on the floor of the summerhouse at his London home, his coat and waistcoat burning from the ferocity of the shotgun blast which had killed him.

Now, a century after Robert Seymour's memorial disappeared, the stone commemorating him is to be unveiled at a ceremony in the back garden of 48 Doughty Street, the museum in Charles Dickens' only surviving London home.

Seymour had taken his own life within 24 hours of a last meeting with the author Dickens, after completing the final illustration – named Death of a Clown – for the writer's first novel, the Pickwick Papers. Almost certainly Dickens had told Seymour he was being dropped as the artist for the serial, which when bound together would become his first runaway best seller and launch his career.

The gravestone, which had been missing for more than a century, was tracked down by Stephen Jarvis, a scholar, and rescued from the damp crypt of a London church. Its re-dedication will be some reparation for a grave injustice which some blame on Dickens.

A number of admirers of Seymour certainly believe that morally Dickens was responsible for his death. The wretched artist is thought to have believed his genius had been stolen and that the book would make another man rich and famous.

Seymour died literally heartbroken: the inquest found that the blast from the fowling weapon, an early type of sporting gun, which he turned on himself, disintegrated his heart.

David Parker, a former curator of the Dickens House Museum, in north London, and an expert on the Pickwick Papers, said: "I don't think Dickens can be blamed for Seymour's suicide. That's not to say that he handled his transactions with Seymour perfectly, but blame is another thing … If there is any truth in the hypothesis that the distinguished illustrator couldn't bear to be bossed around by the scribbling whippersnapper, then it has to be said that Seymour had failed to grow up and come to terms with realities."

Seymour took his own life within 24 hours of that last meeting with Dickens. Before he killed himself he destroyed his private papers, just as Dickens would 34 years later.

Seymour was replaced as Dickens' artist by Robert W Buss, but he too was quickly replaced by the illustrator most famously associated with the author, one who would work with him for decades – Hablot Knight Browne, nicknamed Phiz.

When the publishers Chapman and Hall brought Dickens and Seymour together in 1836, the latter, whose work had been compared to that of Hogarth and who had been dubbed "the Shakespeare of caricature", was certainly better known than the young journalist and author.

Within the year that changed forever: Dickens and Pickwick, when the serial was bound together into his first novel, became a sensation.

But the idea for the book was Seymour's. The illustrator was known for comic sporting prints, and he dreamed up the idea of The Nimrod Club, the adventures of sporting friends, which would have his pictures linked by texts supplied by a hack writer. Dickens protested he knew little of sports – and took control of the whole project. Seymour's title was dropped in favour of the Pickwick Papers, and though in two of the best-loved passages Mr Pickwick and his friends go ice skating and play cricket, most of their adventures occur in coffee houses and inns.

After a couple of the stories were published, disagreements between the artist and author became insoluble, and it was clear which rising star the publishers would back.

The clash and then the death of Seymour is still a sensitive subject for Dickens scholars.

Dickens and his publishers had been at pains to play down Seymour. In a later edition Dickens wrote: "Mr Seymour never originated or suggested an incident, a phrase, or a word, to be found in the book."

Jarvis, who hunted down the gravestone, is a member of the Dickens Fellowship, and is working on a biography of Seymour. He traced an 1889 magazine report noting "the painfully neglected condition" of the grave at St Mary Magdalene in Islington, London. Gravestones were later removed to the church crypt, where Jarvis found Seymour's by torchlight.

The stone's three-line inscription just records Seymour's name, age and date of death. Jarvis believes Seymour's family fell into poverty, and could not afford to add later deaths to the stone. The suicide blighted their lives, he says, leading indirectly to the suicide by drowning of his son, whose landlady recorded the piteous remark that he was so lonely he thought he would go insane.

Jarvis felt he owed it to Seymour not to abandon this single memorial to another century in darkness. It took him five years to get permission to move the stone to Doughty Street, a move which he sees as both honouring Seymour and righting a historic wrong.

At the museum, which is planning celebrations for the bicentenary of Dickens' birth in 1812, the director, Florian Schweizer, said: "We welcome the monument as an important addition to our collections – but I don't think one can blame Dickens for his death at all."

I have been informed that there was a 1952 film from George Minter Productions. Details .