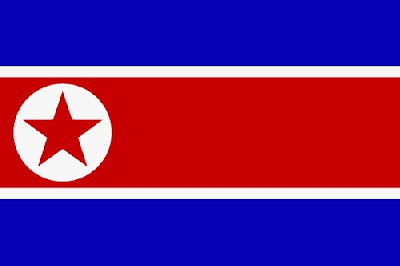 Have you, barefooted, stepped on a minute grain of sand, a metal shaving, or a shard of glass? Irritating isn't it? The same is with North Korea...always causing pain and suffering and for what...global recognition, aid, to be part of the nuclear "big boy" group. Or are they just a pain in the ass.? The North Korean regime isn't stupid and they know full well that if they strike anywhere, all 46,000 square miles will be a burnt cinder and making threats with stones and wood clubs.

North Korea routinely threatens war when South Korea and the U.S. hold joint military drills, which Pyongyang sees as a rehearsal for an attack on the communist North. The latest threat comes amid increased tensions on the divided peninsula over the deadly sinking of a South Korean warship that Seoul and Washington blame on Pyongyang.

The allies' defense chiefs announced earlier in the week they would stage the drills to send a clear message to North Korea to stop its "aggressive" behavior. Forty-six South Korean sailors were killed in the March sinking of the Cheonan, considered the worst military attack on the South since the 1950-53 Korean War.

North Korea vehemently denies any involvement and says any punishment would trigger war.

On Saturday, North Korea's powerful National Defense Commission — headed by leader Kim Jong Il— backed that threat up by promising a "retaliatory sacred war" against South Korea and the U.S. for what it called a second "unpardonable" provocation after wrongly accusing the North in the Cheonan incident.

"The army and people of the (North) will legitimately counter with their powerful nuclear deterrence the largest-ever nuclear war exercises," the commission said in a statement carried by the country's official Korean Central News Agency.

A day earlier in Hanoi, a North Korean spokesman for the delegation attending a regional security conference warned the drills would draw a "physical response" from Pyongyang.

The nuclear-powered USS George Washington supercarrier is already docked in the southern port of Busan for the military games set to begin Sunday. In addition, the U.S. keeps 28,500 troops in South Korea to deter against aggression, a presence that Pyongyang cites as a key reason behind its drive to build nuclear weapons.

"The more desperately the U.S. imperialists brandish their nukes and the more zealously their lackeys follow them, the more rapidly the (North's) nuclear deterrence will be bolstered up along the orbit of self-defense and the more remote the prospect for the denuclearization of the Korean peninsula will be become," the commission statement said.

The U.S.-South Korean military drills are to set to run through Wednesday, with about 8,000 U.S. and South Korean troops on some 20 ships and submarines carrying out exercises in the East Sea.

U.S. Secretary of State Hillary Rodham Clinton announced Wednesday, after visiting the Demilitarized Zone dividing the two Koreas, that the U.S. would slap new sanctions on the North to stifle its nuclear ambitions and punish it for the Cheonan sinking.

On Friday, the European Union said it, too, would consider new sanctions on North Korea.

The North's Foreign Ministry also said Saturday that Pyongyang will further strengthen its nuclear deterrent and again mentioned "powerful physical measures" in response to the U.S. military provocations and sanctions.

North Korea "is prepared for both dialogue and war. It will remain unfazed by military threat and sanctions," KCNA quoted an unidentified Foreign Ministry spokesman as saying.

Clinton and a North Korean official traded barbs Friday over the sinking, the military drills and the imposition of the new U.S. sanctions. North Korean spokesman Ri Tong Il said the tensions showed the need to negotiate a peace treaty to replace the armistice signed at the end of the Korean War.

Clinton said the U.S. is willing to meet and negotiate with the North, but this type of threat only heightens tensions. She added progress in the short term seems unlikely.

"It is distressing when North Korea continues its threats and causes so much anxiety among its neighbors and the larger region," she told reporters. "But we will demonstrate once again with our military exercises ... that the United States stands in firm support of the defense of South Korea and we will continue to do so."
Posted by Mercury at 1:36 PM