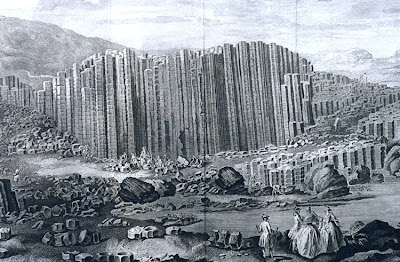 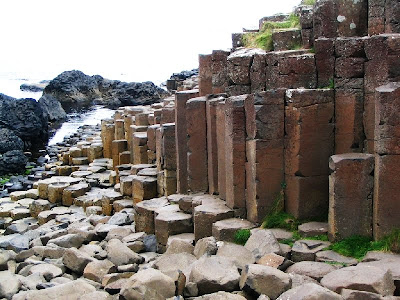 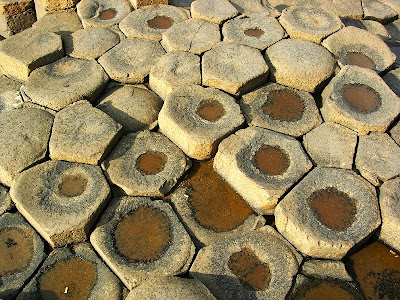 The Giants Causeway is surrounded by myth and legend. The famous legend concerns two rival giants, Benandonner, who lived in Scotland, and Finn MacCool in Ireland. MacCool was a relatively small giant at 52 feet (about 16 meters), and the two giants would shout across the sea to each other demanding a trial of strength.

Finn MacCool decided to build a rocky path across the sea between the two countries to enable the contest to begin, but exhausted by the work, he fell asleep on the causeway and was found by his giant wife Oonagh. Suddenly she saw Benandonner approaching, who was truly a huge giant. Knowing that Finn would be no match for the huge giant, she placed a coat on top of the sleeping Finn.

Benandonner demanded to know where Finn was. Oonagh replied by pointing at the sleeping Finn and saying, "Be quiet or you will wake my child." Seeing this, Benandonner had second thoughts. If that was the size of their child, how big would Finn be? He ran back to Scotland, smashing the causeway in his trail.

Other stories surrounding the Giants Causeway concern the wrecks of ships that have perished on the wild coastline. In 1588 at midnight on 30 October, the Girona, a ship that was part of a Spanish Armada, hit Lacada Point. The ship had just picked up the survivors from two other shipwrecks. The crew battled to stop the collision, but it was to no avail, and 1,200 men were lost. Only five men survived the wreck.

ScienceDaily
Physicists at the University of Toronto have cracked the mystery behind the strange and uncannily well-ordered hexagonal columns found at such popular tourist sites as Northern Ireland's Giant's Causeway and California's Devil's Postpile, using water, corn starch, and a heat lamp.

"The size of the columns, which varies from site to site between a few inches and a few yards, is primarily determined by the speed at which lava from a volcanic eruption cools," says U of T physics professor Stephen Morris, who supervised the thesis project of PhD student Lucas Goehring. Cooling lava sometimes forms strange column-shaped formations with a remarkable degree of order. The most famous of these hexagonal columns are found at the Giant's Causeway in Northern Ireland, where they are said to be the work of Finn MacCool, an Irish giant.

Using a combination of field observation, experiments and mathematical theory provided by Harvard University professor L. Mahadevan, they have solved the problem of what decides the size of the columns. The key to understanding the size of the columns was to reproduce the phenomenon in the lab. Using a mixture of water and corn starch – which cracks as it dries out and forms very similar columns – they carefully controlled the drying process, and established a relationship between the size of the columns and speed with which the drying front moved.

Goehring also visited several sites around the world and measured certain markings on the sides of lava columns, which were used to deduce the speed with which they formed as the lava cooled. "Putting all of these pieces together showed that the columns are formed by the same process in starch as in lava," says Morris. "We identified the special ratio of speed, column size and diffusion rate that is the same for all cases, finding that the slower the cooling process, the larger the resulting columns would be."

Their results allow for the deduction of the cooling rate that produces these structures and the comparison of different sites. They also enable the prediction of the shapes of other fracture networks such as drying mud, cracking paint or the patterns of fracture in permafrost. "It's always a delight to be able to think about a beautiful natural system and even nicer to solve an ancient problem with such a simple experiment," says Morris.

I prefer the myth.