James Henry Breasted...one of the giants in Egyptology 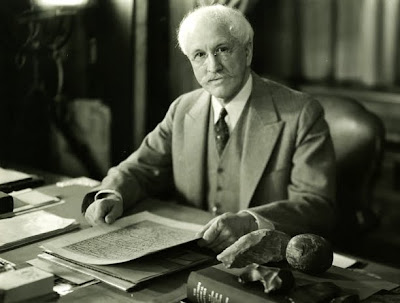 Archaeology
In 1919, the American Egyptologist James Henry Breasted received five years of funding from John D. Rockefeller, Jr., to found the Oriental Institute at the University of Chicago, which was to be a “Research Laboratory” for the study of the civilizations of the ancient Middle East. Even though World War I had just ended and the Middle East was far from stable or safe, the 53-year-old Breasted immediately made plans to travel with four companions through what is now Egypt, Iraq, Syria, Lebanon, and Israel to purchase antiquities and identify sites for excavation.

Breasted’s trip is illustrated at an exhibit at the Oriental Institute of the University of Chicago: “Pioneers to the Past: American Archaeologists in the Middle East 1919-20” through August 30, 2010.

Breasted traveled by boat to England in August 1919, where he met colleagues and British government officials who gave him letters of introduction and permits to travel in areas still under British military control. The first of the national borders that we are familiar with today would not be established until 1921. Among the permits was one that allowed Breasted to travel with a handgun.

After passing through Paris and purchasing antiquities for the Oriental Institute there, Breasted arrived in Egypt at the end of October 1919. Archaeology was of increasing political importance, both to colonial powers and to growing nationalist movements in the Middle East. Breasted met the High Commissioner of Egypt, General Edmund Allenby, who gave him further permits and letters of introduction to British officers in Mesopotamia. He also gave Breasted access to a British military plane, which Breasted had requested because he wanted to take aerial photographs of sites, including the pyramids of Giza. Allenby had read Breasted’s book, Ancient Times, and had even used Breasted’s account of the ancient battle of Megiddo to plan his invasion of that region of Palestine during World War I.

Travel from Egypt to what was then called “Mesopotamia” (soon to be named Iraq) was by steamship to Bombay, India, and then to Basra. British control of Mesopotamia was administered by the India Office, and, indeed, many of the British rank-and-file soldiers in Mesopotamia were of Indian origin.

After a brief stay in Bombay (Mumbai), Breasted and his team were able to travel to Basra with permissions from the British Foreign Office. It had been six months since he left Chicago. In Mesopotamia, Breasted and his team were given transportation on British military trains, cars, and horses so that they could visit the known archaeological sites, including Ur, Nippur, and Babylon in southern Mesopotamia and the Assyrian capital cities of Ashur, Nineveh, Nimrud, and Dur-Sharrukin (Khorsabad) in northern Mesopotamia. Although it took a number of years, the Oriental Institute would go on to dig two of those sites (Khorsabad and Nippur), as well as a series of sites in the Diyala region that were unknown in 1920.

Percy Hambro, the British Quartermaster General in Mesopotamia, wrote to Breasted to tell him that soldiers digging a machine gun emplacement had uncovered some wall paintings near Abu Kemal at a site on the Euphrates River at the border of British control (now close to the border of Iraq and Syria, Breasted was able to identify the site as the ancient city of Dura-Europos). Breasted’s study of these paintings from the Roman garrison was carried out in a single day, immediately before the British withdrew toward Baghdad. Breasted and his team then crossed the border into what was then called the “Arab State” (now Syria), flying an American flag on their wagon to make sure that no one confused them with the hated British. This turned out to be good advice; within several weeks of their departure, the British political officer in Abu Kemal was killed by local tribesmen.

When the British had attacked the Ottoman Turks in a campaign that led them to capture Damascus, they were assisted by Arab irregulars, led by the Hashemite prince Faysal and T.E. Lawrence (“of Arabia”). The Arabs were promised their own state, and, after the end of World War I, they worked to establish one based in Damascus.

The extremely uncomfortable wagon trip through the Arab State extended along the Euphrates River and ended in Aleppo. Because of riots and instability, Breasted was not able to visit most of the archaeological sites he wanted to see in the Arab State, but he did visit the mound of Kadesh, site of a famous ancient battle between the Egyptian and Hittite armies in the 13th century B.C.

In Aleppo, Breasted obtained permissions to continue to Beirut (Beyrouth), which was under French control. While in the area that would become Lebanon, he visited the American University of Beirut and archaeological sites, including the Roman city at Baalbek and the Phoenician sites of Byblos and Sidon.

Returning to the Arab State, he met with King Faysal in Damascus. Within two months of Breasted’s departure the Arab State’s existence was ended by a French invasion from Beirut.

Having left Arab and French-controlled areas, Breasted and his expedition traveled toward Jerusalem. The city itself was controlled by the British military, but the countryside was considered extremely unsafe. Breasted nevertheless wished to visit Megiddo, the focus of some of his historical research. They were frustrated in their plans, however, as wrong directions and lack of good roads meant that he was only able to see the site from a distance. The Oriental Institute would, however, go on to excavate Megiddo from 1925-1939.

Breasted’s trip through the Arab State was of sufficient interest to the British government that he was summoned to London to discuss matters with Lord Curzon, the British Foreign Minister. Although he was not sent as a spy, the value of Breasted’s observations reflects an aspect of the connection between archaeology and politics in the colonial era. In mid-July 1920, he was finally able to return to Chicago, 11 months after he had departed. In addition to his passport, hundreds of letters and 1,100 photos document this founding trip of the Oriental Institute.


Enter James Henry Breasted, Egyptology, and other related terms in the blog's search engine.
Posted by Mercury at 8:11 PM