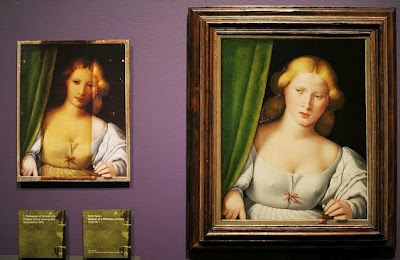 "Woman at a Window," right, by an unknown Italian artist, was acquired by the National Gallery in the mid-19th century. Following an investigation, it was revealed the painting had been altered. A photograph, left, shows the painting during the restoration process.
"Old Masters and Modern Science"

The New York Times
At first blush “Close Examination: Fakes, Mistakes and Discoveries,” here at the National Gallery, has the quaint, cheerfully scholastic earnestness of a science fair. Some 30 pictures from the permanent collection, most of them culled from storage, have been enlisted to anchor a flurry of wall texts, X-rays and the sort of enlarged microscopic cross sections of layered pigments and varnish vaguely resembling the cautionary photographs of plaque that elementary school teachers flourish before floss-wary fourth graders.

A celebratory primer on polarized light microscopy and other cumbersomely termed diagnostic tools employed by conservators today to determine when and how a picture was made, the show may sound like homework.

But it isn’t; far from it. It’s one of those gems, which, amid the hard science, stumbles onto squishier truths about what we are really looking for when we look at art. Out to instruct us in the chemistry of painting, it ends up suggesting how elusive art remains despite all the gadgets that we devise to master it.

Along the way it riffs on the mistaken-identity theme: a picture given in good faith by the City of Nuremberg to Charles I in 1636 as a work by Dürer that’s proved to be a copy; a copy of a Veronese that, after grime is removed, emerges as the genuine article. And there are forgeries, art’s whodunits, pandering to our basest instinct for knocking experts off pedestals. People love fakes because fakes play into the populist suspicion that much art is really just a scam, a suspicion encouraged by the fancy names wrongly attached to and insane prices often paid for the stuff.

Names, dates, prices, provenance — they do promise solid ground. In museums and galleries we can very often feel as if we’re adrift, swimmers on the open sea. Another Madonna and Child? Find the wall label. Raphael. O.K. We’re safe to grunt and nod approvingly.

I’m exaggerating, of course. We have plenty of serious reasons to seek out names and numbers connected to pictures: we need them to write history and occasionally to remind ourselves, when these names and numbers turn out to be wrong, not only of scam artists but also of the whole infinitude of human folly.

There is, for example, the Italian Renaissance painting of a young woman, brunet, demure and wide-eyed, standing before a window, that entered the National Gallery’s collection in the mid-19th-century. Was it by Lorenzo Lotto or Palma Vecchio? Experts debated. Either way, she was a beauty, they agreed, despite her blemish: a layer of damage visible just beneath her hair, which conservators only got around to checking in 1978.

They discovered — you guessed it — that the demure brunette covered up a sultry blonde whose hair had been darkened, jaw line and brow softened, eyes widened and breasts made more discreet to contrive what the unknown “restorer” more than a century ago thought fellow Victorians would regard as a comelier Renaissance portrait. The original was still Italian, still Renaissance, although hardly like the faux-Renaissance version that masked it.

To modern eyes the cleaned picture looks more striking, while the shenanigans that passed for conservation a century ago only prove how taste is hostage to its era. No doubt methods contemporary conservators use to restore art that we believe are unprejudiced and sage will come to seem just as time-bound and clueless eventually.

But isn’t this painting also more than just an object lesson in historical subjectivity? A different Italian picture, also acquired over a century ago by the gallery, shows another blonde, this time reclining in a landscape. It is titled “The Allegory,” for want of a better idea of what it’s about. Experts agreed when it was bought that it was by Botticelli, and the gallery forked over a fortune for it, more than it paid for a second Botticelli at the same auction from the same collector.

Critics tooted a few horns when “The Allegory” went on view, but there was one skeptic who wrote to the director — there’s always one! — and gradually she was joined by others, and soon the prize picture was becoming a kind of embarrassment to the gallery, which had to concede that maybe it wasn’t by Botticelli after all, because even everyday visitors now said they saw something seriously wrong with it. The blonde looked like a cartoon character, a costumed feline out of “Cats,” ham-fisted and nothing like the other, cheaper Botticelli the gallery had bought, which steadily rose in estimation to be regarded as a treasure and ingenious purchase

Presumed to be a fake, “The Allegory” soon ended up in storage where modern conservators one day, just for curiosity’s sake, decided to take another look. They realized it wasn’t fake. In fact it was an old master painting, from Botticelli’s day, just as those deluded experts had thought in the 19th century, even if Botticelli may not have been the old master who painted it. Although who knows? Maybe he was.

So “The Allegory” is what, then? A case study in dubious connoisseurship or mad money or gullible criticism?

It’s a picture. And the picture is the same whether it is said to be old or new, genuine or fake, an original or a copy. It becomes no more or less elegant or funny looking. Its role in the evolving narratives of art history changes. Its price can go up or down. But cost is not value.

And that’s what we’re looking for when we look at art, no? Something of value, deeper and more meaningful than a name or a number, which can’t be gotten out of a test tube or lab report, which, emotionally speaking, requires an effort on our part. It demands that we look for ourselves.

And then you never know what you might find. A “Virgin and Child With an Angel,” an early work by Francesco Francia, the Bolognese master and contemporary of Raphael, for years was said by the gallery to exemplify the painter’s training as a goldsmith. Its refinement was admired. Then an identical picture turned up. Gallery conservators examined their version and found that the tiny aging cracks on the surface had actually been painted, faked. Further studies revealed the use of latter-day pigments like chrome yellow, and an underdrawing that seemed more 19th century than Renaissance.

The work was a forgery. Science proved it. And so there it hangs in the show, on a wall of shame, surrounded like a mug shot by the evidence of its true crime.

But look, never mind what the label says, and you may notice something else about the picture, too, some other truth.