Steve Jobs being a jerk 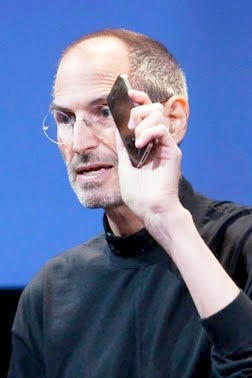 That's okay, operate in a denial form and this will come back to bite you in the butt. The consumer paid good money for this so-called quality [compromised] product and appears to be getting the shaft from Jobs.

Slate
On Thursday, I hoped that Apple CEO Steve Jobs would admit there's a problem with the new iPhone's antenna and apologize for pretending there wasn't. I didn't get that apology. Not even close. Instead, in a defensive press conference at Apple's headquarters on Friday, Jobs argued that the new iPhone offers terrific, out-of-this-world reception. He blamed the media for whipping up a frenzy out of a "fact of life" that affects every phone on the market. As Jobs sees it, the only problems with the iPhone 4 are the pesky "laws of physics," which pretty much ensure that anyone who holds a mobile phone in her hands is asking for trouble. The only reason people have been focusing on the iPhone is that blogs keep singling Apple out, perhaps because "when you're doing well, people want to tear you down."

Still, if you want to be a total jerk about it and keep insisting there's a problem with your magical iPhone, Jobs has an offer for you. "OK, great, let's give everybody a case," he said. Happy now, whiners?

I wasn't invited to Apple's event; I followed along on various live blogs. (All quotes here are as transcribed by Engadget and GDGT.) I cringed as I watched. Reports leading up to the event—including a New York Times article that quoted an unnamed Apple rep—suggested that Apple would own up to a problem in the phone's hardware or software. But Jobs kicked off the conference by playing "The iPhone Antenna Song," a YouTube video in which a guy croons, "The media loves a failure in a string of successes." Things got worse when Jobs took the stage and offered a blizzard of statistics to suggest the problems people are reporting aren't unique in the phone market.

Apple, he said, has sold more than 3 million iPhones in the last three weeks, yet only 0.55 percent of purchasers have called the company with reception problems. Very few people are returning the phone, he continued, fewer than returned the iPhone 3GS. He showed off demonstrations of the BlackBerry Bold, the HTC Droid Eris, and the Samsung Omnia II that exhibited the same problem that's been reported on the iPhone—when you hold them a certain way, their signal bars begin to drop. "Phones aren't perfect," he said, and the problem reported with the iPhone is a "challenge for the entire industry."

But Jobs' numbers are misleading. From the very first reports of trouble, Apple has publicly insisted that there's no reception problem with the iPhone; it even sent its AppleCare technical support staff "positioning statements" telling them to inform customers that "iPhone 4's wireless performance is the best we have ever shipped." It's no wonder, then, that not very many people called Apple to complain about problems. It's been clear to everyone who bought the iPhone 4 that Apple would not acknowledge its reception problems. Why would you waste time on the phone with technical support when you knew it would be no help?

What about the fact that so few people are returning the phone? Jobs is right—it is an indicator that the iPhone 4 is a great device that people want to keep. That doesn't mean, however, that the phone isn't afflicted with an annoying flaw. The fact that people aren't returning the new iPhone doesn't mean the problem doesn't exist. More probably, it means that customers were waiting to see how Apple, a company known for good customer service, might respond to the problem.

Jobs' claim that the same call-dropping problem can be observed on other phones also misses the point. Even if that's true, Jobs elided the clear evidence that the issue is much more obvious and repeatable with the iPhone 4. (When a reporter asked, "I can't get my [BlackBerry] Bold to drop right now, maybe you can show me how to do it?" Jobs responded, "You may not see it in certain areas.") If it were the case that people were simply out to attack Apple, why didn't we see people posting dozens of videos showing last year's iPhone, the 3GS, dropping calls when you held it wrong? Jobs' data offered a clue why—as the CEO admitted, it turns out that the iPhone 4 drops more calls than the iPhone 3GS.

While Jobs did admit this fact in his press conference, he mangled the stats to make the iPhone 4's dropped call increase look minor. "The iPhone 4 drops less than one additional call per 100 than the 3GS," he said. As Jobs sees it, that's not a big rise in dropped calls. Yet that's not an obvious conclusion. Last year, an AT&T spokesman told me that AT&T's average iPhone dropped-call rate is 1 percent—in other words, the old iPhone dropped one call out of 100. If the iPhone 4 drops nearly one additional call out of 100, that could be close to a 2 percent dropped-call rate—or double the dropped-call rate of the old iPhone. That sounds a lot more serious, doesn't it?

Jobs also ignored the possibility that people are adjusting their behavior to avoid dropped calls on the iPhone 4. After all, Jobs himself allegedly counseled a customer who's getting poor reception to "avoid holding it in that way." As my own dropped call rate rose after switching to the iPhone 4 (from the 3GS), I found myself constantly on edge about how I held the phone, and have lately taken to keeping it in my pocket while I use hands-free earbuds. Sure, that's helped my dropped-call problem, but it's far from an ideal solution.

So, why is the iPhone 4 having this dropped-call problem? Jobs said he had his own "pet theory": It's not a design problem, but an accessory problem. When the 3GS came out, there were lots of third-party cases available for it. But there aren't enough cases for the new iPhone. "Only 20 percent leave the store with a case," Jobs said. So there are more dropped calls on the new iPhone because fewer of them are in cases. That's the closest Jobs came all day to admitting that there is a design flaw in the iPhone; if you need a case to reduce dropped calls, then the product, by itself, must be flawed.

Don't get me wrong. I'm happy Apple is giving iPhone users a free case. I'm hoping the freebie will reduce my dropped calls, and if that's the case, I won't be returning my iPhone.

I just wish Jobs could have handled this mini-crisis in a classier way. His data clearly show that the new iPhone is dropping more calls than the old one. He could have admitted a problem, offered a fix, and said, "We're sorry for any trouble we caused you." Instead, he sounded wounded and paranoid, as if we were all being ungrateful for not recognizing Apple's contributions to the world. "We love our users so much we've built 300 Apple retail stores for them," he claimed at one point. Wow, thanks, Steve—all this time, I thought you built those stores just to sell stuff! He said that a Bloomberg Business Week report that he'd been warned about potential antenna problems was "total bullshit." At another point, he asked a questioner, bizarrely, "What would you prefer, that we're a Korean company? Do you not like the fact that we're an American company leading the world right here?"

What I'd prefer, since Jobs is asking, is a company that doesn't pee on my leg and tell me it's the "most revolutionary rain storm ever!" A free case is all well and good. Just lose the attitude, Steve. You screwed up. We know it. You know it. Just admit it.


Consumer Reports gives "thumbs down" on Apple's iPhone 4
Posted by Mercury at 6:40 AM