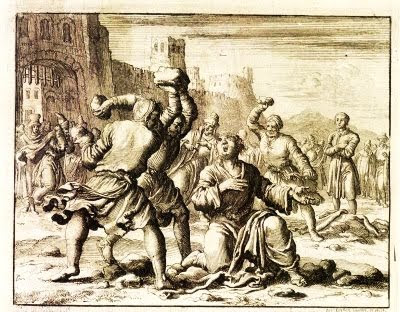 "IRAN: Hard-line official insists stoning penalty for adultery stands, but is under a required review"

Los Angeles Times
The hard-line chief of Iran's High Council for Human Rights, the longtime political operator and insider Mohammad-Javad Larijani, says the sentence of stoning against an impoverished mother of two accused of adultery stands, even though it is under a required review.

In other words, 43-year-old Sakineh Mohammadi Ashtiani could still be buried up to her neck and pelted with small rocks until she dies because she was convicted of having sex outside of marriage.

Larijani, a well-connected regime loyalist, blamed the Western media for making a big deal out of nothing.

"Our judicial system cannot change its course because of Western attack and media pressure," he told the official Islamic Republic News Agency in a report published late Friday (in Persian). "The Western media's attack on the Islamic Republic of Iran comes under a pretext every time, and in recent years it is the instructions of the Islamic religious law that have been the target of their attacks."

No one's quite sure what's next for Ashtiani. Larijani said Ashtiani's sentence of death by stoning had not been rescinded, contradicting a statement issued Thursday by the Islamic Republic's embassy in London.

"Regarding this criminal, I must point out that first of all the punishment of death by stoning exists in our constitution but the esteemed judges issue this verdict on very rare occasions," said Larijani, whose brothers include the head of the judiciary branch and the speaker of parliament. "This case has passed its long procedure, and the defendant was first sentenced to 90 lashes and then, in another court, to death by stoning. The review of this sentence in currently underway."

Her lawyer said even if they halt the stoning, he's worried they'll put her to death by some other means. "We do not know which penalty will be substituted for stoning," her lawyer told Babylon & Beyond.

He said he's asked for her pardon four times, especially since no private individual is seeking her prosecution -- just the government. "For the sake of the Islamic system and its reputation in the world, nobody should be stoned to death anymore," said Ashtiani's lawyer, Mohammad Mostafai. "If the judiciary branch is attaching importance to the prestige of the system in the world, then the stoning should be stopped."

But Larijani, whom Western diplomats have described as a cynical and power-hungry solider of the Islamic Republic, rejected the contention that the judiciary should consider world opinion or that the high-profile international campaign in support of Ashtiani might make Iran's judicial authorities think twice about putting her to death for committing a sex crime.

"The commotion that the Western media has started in connection with this case will not affect our judges' views," he said. "The execution of Islamic religious laws on death by stoning, hijab and inheritance has always faced their audacious animosity and basically any issue which hints of religious law is always opposed by them." 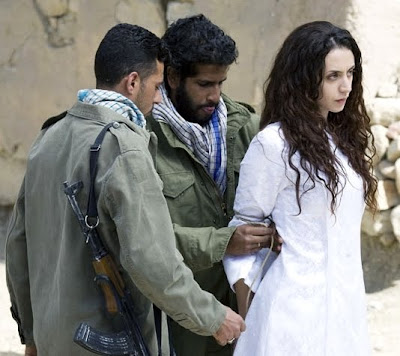 Martyr. Soraya [Mozhan Marno] is stoned to death in director Cyrus Nowrasteh's latest film, based on a novel by Freidoune Sahebjam.

"'The Stoning of Soraya M.' Is Straightforward But Timely"

The Daily Californian
As the film "The Stoning of Soraya M." stages its titular event, director Cyrus Nowrasteh liberally allots time for the cinematic realization of Soraya's (Mozhan Marno) tragic end. On the screen, a woman's upper torso protrudes upright in blood-spattered sand and rocks. Her dark, thick hair is uncovered, adorned only with thick streaks and droplets of red.

As her rib cage gives way under the weight of her drooping head, drifting closer and closer to the earth, white rocks fly out of the hands of her father, her husband, even her two young sons, landing squarely on their target, killing her slowly with each maliciously aimed blow. And as the red of the blood contrasts against the white sand surrounding the half-buried body, a dark green blanket is brought by traveling circus performers to cover up the brutality of the town's men, and the colors of the Iranian flag remain in focus, in contemplation of the violent history of the landscape, a violence that continues to the present day in Iranian streets.

Based on the novel by French-Iranian reporter Freidoune Sahebjam, played in the film by Jim Caviezel, the story illuminated on the screen is set in 1986's Iran, with the Ayatollah and Shia mullahs exerting despotic pressure on the Persian people. The film is pervaded by the misogynistic marginalization and abuse of women and girls in the town of Kupayeh, but the story told here is just as much about the indoctrination of male citizens from a young age. Soraya's aunt Zahra, played by Shohreh Aghdashloo ("House of Sand and Fog") is emblematic of the citizens' sense of injustice under this new regime, after having had a taste of women's suffrage and stabilizing infrastructure before the overthrow of the Shah during the Iranian Revolution of 1979.

The dramatic film functions in a space similar to a documentary, and as Nowrasteh breathes life into this true story he employs cinematic artistry as a means to an end that educates and illuminates a dark past, without overt or distracting stylistic choices. Much like Caviezel's Jesus of Nazareth and his crucifixion in "The Passion of the Christ," the violence portrayed on the screen is unbearable at points. Hand in hand with the graphic physicality of the film, the psychological battles between characters are similarly difficult to withstand. Watching children and friends of Soraya throw stones after being told, "With each stone your honor will return," and "Go ahead, boys. For God," is just as hair-raising as watching the special effects team hard at work throughout the lengthy stoning scene.

The story is the main character, woven into place by beautifully acted roles-Caviezel even pulls off a subtly French-inflected English when he's not conversing in Farsi. The timeliness of the film's US release, amid daily news reports and Twitter posts regarding the riots in the streets of Iran, has already been called to the public's attention by major news networks and publications. This relevance, coupled with the timeless necessity of giving voice to underrepresented peoples and individuals, bolsters the effectiveness of a film otherwise unexceptional in its stylistic accomplishments. Seemingly running down a list of cinematography to-do's, including a dolly zoom and flying stones turning into doves, "The Stoning of Soraya M." accomplishes its main mission as expressed by Zahra's promise: "I will tell the world." The narrative frames through which the film is told function to bring us closer to the intimate details of Soraya's experience and furnish us with perhaps a better understanding of the depths of the injustice taking place in present day Iran.
Posted by Mercury at 6:03 AM