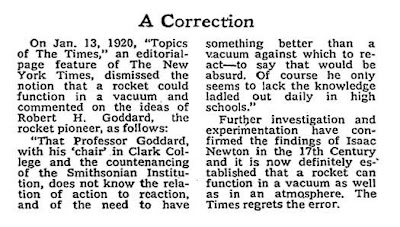 "New York Times to NASA: You're Right, Rockets DO Work in Space"

The New York Times
On the 40th anniversary of the Apollo 11 moon landing, it seems like every news outlet worth its weight in regolith is reproducing classic content to put the historic moment in the proper content. Well, here’s one Apollo-related news item, printed on July 17th, as Aldrin, Armstrong and Collins were well on their way to the Moon, that I doubt the New York Times wants to draw much attention to today: a retraction of a 1920 article which stated rocket motors couldn't work in the vacuum of space, almost fifty years after the fact.

JULY 17, 1969: On Jan. 13, 1920, Topics of The Times, an editorial-page feature of The New York Times, dismissed the notion that a rocket could function in a vacuum and commented on the ideas of Robert H. Goddard, the rocket pioneer, as follows.

"That Professor Goddard, with his 'chair' in Clark College and the countenancing of the Smithsonian Institution, does not know the relation of action to reaction, and of the need to have something better than a vacuum against which to react -- to say that would be absurd. Of course he only seems to lack the knowledge ladled out daily in high schools."

Further investigation and experimentation have confirmed the findings of Isaac Newton in the 17th century and it is now definitely established that a rocket can function in a vacuum as well as in an atmosphere. The Times regrets the error."

I love this, not because of how wrong the NYT turned out to be, but because of how right the editors thought they were. It’s a nice reminder of how one man’s ridiculed notion can turn into reality a few decades later. Take note, Robert Bigelow, Richard Branson, Elon Musk, and the like.

Unfortunately, this correction came about 24 years after Goddard’s death (the cause of which was, surprisingly, not a rocket to the face) but you've got to love the idea of some editor digging this editorial up, waiting to see if Apollo 11 made it into space, and then hastily writing a correction.

Now this leads to a broader subject expressed in a new book by Stanton Friedman and Kathleen Marden...Science Was Wrong: Startling Truths About Cures, Theories, And Inventions They Declared Impossible.

Friedman and Marden trace how developments in aerospace, communication, medicine and other fields were initially believed to be impossible. Of course, the visionary scientists they chronicle were right, it was their philosophy that was wrong.

It's an entertaining romp, as history tends to forget such foibles. But Friedman and Marden don't let the naysayers off so easy. In one example they quote The New York Times from 1920 mocking a scientist for believing something could propel itself in space. A correction was printed in 1969: "Investigation and experimentation have confirmed the findings of Isaac Newton ... it is now definitely established a rocket can function in a vacuum."

Friedman, a well-known expert on UFOs, and the original civilian investigator of the Roswell Incident, has a very clear agenda in exposing impossibilists. By showing how history has been unkind to naysayers, Friedman and Marden open the discussion for aliens, cold fusion, star travel and other ?impossible' things.

Friedman and Marden relish pointing out the ignorance of experts, but as the philosophy of science teaches us, it's not really a lack of knowledge to blame but a problem of paradigms. The two main problems Friedman and Marden dance around, but fail to rip into, are economics and religion, including when it comes to their own causes.

But they still make quite the enjoyable point, one that's buffered, as reported last month in the Globe and Mail, by the fact "we only know the total matter content of the universe - it's four per cent ... The rest is something we don't understand."

Science Was Wrong: Startling Truths About Cures, Theories, And Inventions They Declared Impossible

Two months before the Wright brothers' historic flight at Kitty Hawk, a top scientist declared that "no possible combination of known substances, known forces of machinery and known forms of force can be united in a practical (flying) machine..." Germ theory was first advanced in ancient Sanskrit texts thousands of years ago, but wasn't widely accepted until late in the 19th century.

Space travel was declared "utter bilge" in 1956 by the British astronomer Royal, one of a long line of scientists who "proved" it was impossible.

Throughout history, it has been difficult, even impossible, to promote the acceptance of new discoveries. Yet during the last two centuries, there has been a veritable explosion of new cures, theories, techniques, and inventions that have revolutionized aviation, space travel, communications, medicine, and warfare.

Most of them, of course, were deemed "impossible."

Science Was Wrong is a fascinating collection of stories about the pioneers who created or thought up the "impossible" cures, theories, and inventions "they" said couldn't work. How many have suffered or died because cures weren't accepted? How many inventions have been quashed? How much progress was delayed or denied?

You will end up shaking your head in disbelief and even disgust as you learn the answers.
Posted by Mercury at 9:19 AM