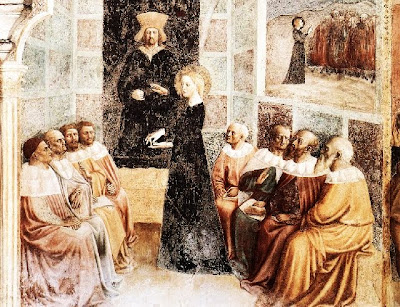 Hypatia and the Philosophers of Alexandria
Hecate wrote...

Hypatia was the daughter of the mathematician and philosopher Theon of Alexandria and it is fairly certain that she studied mathematics under the guidance and instruction of her father. Hypatia became head of the Platonist school at Alexandria in about 400 AD. There and in Athens she lectured on mathematics and in particular the philosophy of Neoplatonism. Hypatia based her teachings on those of Plotinus, the founder of Neoplatonism, and Iamblichus who was a developer of Neoplatonism around 300 AD. She was described by all commentators as a charismatic teacher (and also very beauty) and hundreds of students visited her lectures. The Suda encyclopaedia describes a scene of someone seeing: “a great crowd of people and horses in front of her door. Some were arriving, some departing, and others standing around. When asked why there was such a crowd there and what all the fuss was about, he was told by her followers that it was the house of Hypatia the philosopher and she was about to greet them.”

Hypatia was known more for the work she did in mathematics, primarily for her work on the ideas of conic sections introduced by Apollonius. She edited the work On the Conics of Apollonius, which divided cones into different parts by a plane. This concept developed the ideas of hyperbolas, parabolas, and ellipses. With Hypatia’s work on this important book, she made the concepts easier to understand, thus making the work survive through many centuries. Hypatia was the first woman to have such a profound impact on the survival of early thought in mathematics.

The hydrometer (also called an aerometer) an instrument used to determine the density of fluids is considered an invention of Hypatia.

Hypatia came to symbolize learning and science which the early Christians identified with paganism. In 412 AD Cyril (later St Cyril) became patriarch of Alexandria. However, the Roman prefect of Alexandria was Orestes and Cyril and Orestes became bitter political rivals as church and state fought for control. Hypatia was a friend of Orestes and this, together with prejudice against her philosophical views, which were seen by Christians to be pagan, led to Hypatia becoming the focal point of riots between Christians and non-Christians. A few years later, according to one report, Hypatia was brutally murdered by the Nitrian monks who were a fanatical sect of Christians supporting Cyril. According to another account (by Socrates Scholasticus) she was killed by an Alexandrian mob under the leadership of the reader Peter. What certainly seems indisputable is that she was murdered by Christians who felt threatened by her scholarship, learning, and depth of scientific knowledge.

On a fatal day, in the holy season of Lent, Hypatia was torn from her chariot, stripped naked, dragged to the church, and inhumanly butchered by the hands of Peter the reader (alias Peter the Lector) and a troop of savage and merciless fanatics: her flesh was scraped from her bones with sharp oyster-shells, and her quivering limbs were delivered to the flames.
Her murder coincided with the death of the pagan world. In 391 A.D., the largest repository of knowledge in the ancient world, the Library of Alexandria, was burned by a crowd of fanatic monks under the leadership of the Christian Archbishop Theophilus. The end of the Olympic games and Plato’s Academy closed by Justinian at 529 AD are a sign of this decline. Hypatias death marks the end of progress in science for about 1000 years until the spirit of ancient Greece started again to shine.

After a thousand years of night, when the world awoke from her sleep, the first song it sang was the last long of the dying Pagan world. This is wonderfully strange. In the year 1493, when the Renaissance ushered in a new era, the first book brought out in Europe was the last book written in Alexandria by a Pagan. It was the poem of Hero and Leander. The new world resumed the golden thread where the old world had lost it. The severed streams of thought and beauty met again into one current, and began to sing and shine as it rushed forth once more, as in the days of old. A Greek poem was the last product of the Pagan world; the same Greek poem was the first product of the new and renascent world.
Was the Christianity responsible for the decline of the roman empire and the dark ages? There is a controversial discussion that is not the scope of these notes. What I think is true is that a period of many centuries had to pass until again scientific knowledge and technology again started to develop.

When Raphael submitted a draft of his School of Athens fresco to a Bishop he was asked who is the woman depicted between Heraclitus and Diogenes. Raphael replied: “Hypatia, the most famous student of the School of Athens.” The response of the Bishop: “Remove her. Knowledge of her runs counter to the belief of the faithful! Otherwise, the work is acceptable.”

"Hypatia and Her Mathematics" by Michael A. B. Deakin 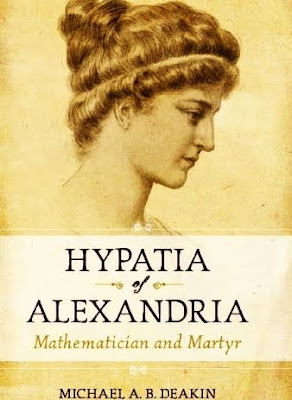 Hypatia of Alexandria: Mathematician and Martyr

Michael A. B. Deakin

SpaceDaily
The new movie Agora chronicles the life, challenges and death of Hypatia, a 4th Century woman astronomer whose contribution influenced and shaped modern science and our understanding of the world and the universe. Mabel Armstrong, author of the award-winning book Women Astronomers: Reaching for the Stars, tells Hypatia's story with the joy that a great science teacher (which she was) can bring to an old subject.

When Hypatia was born, her father, Theon, was a professor of mathematics and astronomy in Alexandria. He believed, as many Greeks did, that it was possible to raise a perfect human being. So he gave his daughter the best possible education, including studies in mathematics, languages, rhetoric, and natural philosophy-or science.

Upper-class women of the time were usually secluded, expected to devote themselves solely to their husband and children, but Hypatia found a job at the most famous institution in the ancient world, the library at Alexandria. She taught mathematics, physics, and astronomy, and wrote many books about these subjects-thirteen books on algebra, her favorite subject, and another eight books on geometry.

In her classes and public lectures, Hypatia exhorted people to think critically. "Reserve your right to think," she said. "For even to think wrongly is better than not to think at all."

When Hypatia sided with Orestes, the Roman governor of Egypt, in a power struggle with Cyril, the head of the Christian Church in Alexandria, her enemies decided to silence her. An angry mob, some say sent by Cyril, attacked and murdered her. They beat her with stones, cut her with clam shells, and finally burned her body.

The death of Hypatia, and the loss of the world's largest collection of scientific and mathematic writings, were factors that contributed to the halt of scientific advances in the West halt for nearly a thousand years.

Her book Women Astronomers: Reaching for the Stars, which has received critical praise internationally, examines the remarkable accomplishments of 21 women who struggled with society's narrow ideas on the appropriate roles for women and the incredible challenges each met in her own way.

She describes the stories of some of the fascinating women who dared to look toward the stars-from the earliest known woman astronomers, to Hypatia of Alexandria, to Astronaut Sally Ride and all the fascinating, brave women in between. 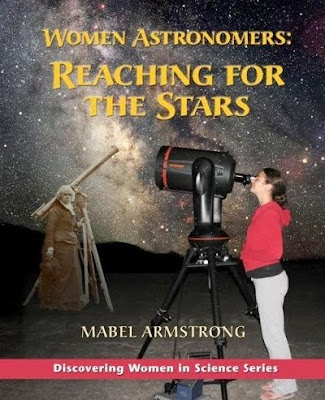 Women Astronomers: Reaching for the Stars

Science vs religion...Hypatia of Alexandria [science] lost
Posted by Mercury at 9:26 AM