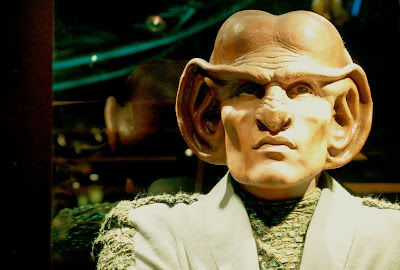 "Open all hailing frequencies in all universal languages".

The following article has a tenuous underlying notion that aliens are parsimonious. I suppose scifi would allow that. I hope there was no government grant money involved in this Enterprise.

PhysOrg.com
For 50 years, humans have scanned the skies with radio telescopes for distant electronic signals indicating the existence of intelligent alien life. The search — centered at the SETI Institute in Mountain View, Calif. — has tapped into our collective fascination with the concept that we may not be alone in the universe.

But the effort has so far proved fruitless, and the scientific community driving the SETI project has begun questioning its methodology, which entails listening to specific nearby stars for unusual blips or bleeps. Is there a better approach?

UC Irvine astrophysicist Gregory Benford and his twin, James — a fellow physicist specializing in high-powered microwave technology - believe there is, and their ideas are garnering attention.

In two studies appearing in the June issue of the journal Astrobiology, the Benford brothers, along with James’ son Dominic, a NASA scientist, examine the perspective of a civilization sending signals into space - or, as Gregory Benford puts it, “the point of view of the guys paying the bill.”

“Our grandfather used to say, ‘Talk is cheap, but whiskey costs money,’” the physics professor says. “Whatever the life form, evolution selects for economy of resources. Broadcasting is expensive, and transmitting signals across light-years would require considerable resources.”

Assuming that an alien civilization would strive to optimize costs, limit waste and make its signaling technology more efficient, the Benfords propose that these signals would not be continuously blasted out in all directions but rather would be pulsed, narrowly directed and broadband in the 1-to-10-gigahertz range.

Their concept of short, targeted blips — dubbed “Benford beacons” by the science press — has gotten extensive coverage in such publications as Astronomy Now. Well-known cosmologist Paul Davies, in his 2010 book The Eerie Silence: Renewing Our Search for Alien Intelligence, supports the theory.

This means that SETI — which focuses its receivers on narrow-band input — may be looking for the wrong kind of signals. The Benfords and a growing number of scientists involved in the hunt for extraterrestrial life advocate adjusting SETI receivers to maximize their ability to detect direct, broadband beacon blasts.

But where to look? The Benfords’ frugal-alien model points to our own Milky Way galaxy, especially the center, where 90 percent of its stars are clustered.

“The stars there are a billion years older than our sun, which suggests a greater possibility of contact with an advanced civilization than does pointing SETI receivers outward to the newer and less crowded edge of our galaxy,” Gregory Benford says.

“Will searching for distant messages work? Is there intelligent life out there? The SETI effort is worth continuing, but our common-sense beacons approach seems more likely to answer those questions.”
Posted by Mercury at 12:11 PM