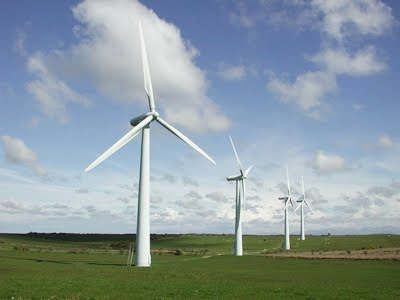 The New York Times
Residents of the remote high-desert hills near here have had an unusual visitor recently, a fixer working out the kinks in clean energy.

Patricia Pilz of Caithness Energy, a big company from New York that is helping make this part of Eastern Oregon one of the fastest-growing wind power regions in the country, is making a tempting offer: sign a waiver saying you will not complain about excessive noise from the turning turbines — the whoosh, whoosh, whoosh of the future, advocates say — and she will cut you a check for $5,000.

“Shall we call it hush money?” said one longtime farmer, George Griffith, 84. “It was about as easy as easy money can get.”

Mr. Griffith happily accepted the check, but not everyone is taking the money. Even out here — where the recession has steepened the steady decline of the rural economy, where people have long supported the massive dams that harness the Columbia River for hydroelectric power, where Oregon has invested hundreds of millions of dollars in tax incentives to cultivate alternative energy — pockets of resistance are rising with the windmills on the river banks.

Residents in small towns are fighting proposed projects, raising concerns about threats to birds and big game, as well as about the way the giant towers and their blinking lights spoil some of the West’s most alluring views.

Here, just west of where the Columbia bends north into Washington, some people are fighting turbines that are already up and running. In a region where people often have to holler to be heard over the roar of the wind across the barren hills, they say it is the windmills that make too much noise.

“The only thing we have going for us is the Oregon state noise ordinance,” said Mike Eaton, an opponent of the turbines.

Oregon is one of a growing number of places that have drafted specific regulations restricting noise from wind turbines. The Oregon law allows for noise to exceed what is considered an area’s ambient noise level by only a certain amount. But what those ambient levels are is sometimes disputed, as is how and where they should be measured.

And while state law limits turbine noise, the state office that once enforced industrial noise laws, housed within the Department of Environmental Quality, was disbanded in 1991, long before wind power became a state priority.

“We have the regulations still on the books, and entities are expected to comply with those regulations,” said William Knight, a spokesperson for the Department of Environmental Quality. “But there really isn’t anybody from D.E.Q. going around to find out if that’s occurring. I’m not sure who you’d call out there in Columbia Gorge.”

Local government is one answer. In May, after testimony from private acoustic experts, the Morrow County Planning Commission agreed with Mr. Eaton, his wife, Sherry, and a small group of other opponents that Willow Creek, a wind farm directly behind the Eatons’ modest house on Highway 74, was indeed exceeding allowable noise levels. The commission ordered the company that operates the site, Invenergy, to come into compliance within six months.

Invenergy quickly appealed — and so did the Eatons and their allies. The county’s board of commissioners also asked the planning commission to clarify its decision. A hearing is scheduled for this month.

“The appeals were all based on the same questions,” said Carla McLane, the county planning director. “What does ‘not in compliance’ mean, and what does it take to be in compliance in six months?”

Opponents say the constant whooshing from the turbines makes them anxious and that the low-level vibrations keep them awake at night. Some say it gives them nausea and headaches. Many other residents say they hear little or nothing at all, and the question of whether windmill noise can harm health is in dispute.

Critics say those complaining about Willow Creek are just angry that they were not able to lease their land to wind developers. Some opponents say they would be happy if Invenergy just turned certain turbines off at night, but others say they want reimbursement for losing their pastoral way of life.

“What we’re really trying to do is get Invenergy to the bargaining table,” said Dan Williams, a builder who is part of the group frustrated with the noise from Willow Creek.

While Invenergy is still dealing with the noise issue even after Willow Creek, which has 48 turbines, has been up and running for more than 18 months, Caithness Energy, the company asking some residents to sign waivers allowing noise to exceed certain limits, hopes it can solve the issue up front. It also has more at stake.

Caithness is building a much larger wind farm adjoining Willow Creek called Shepherd’s Flat. The new farm is expected to have 338 turbines and generate more than 900 megawatts when it is completed in 2013, which would make it one of the largest wind facilities in the country.

Large farms like Shepherd’s Flat are regulated by the state. Tom Stoops, the council secretary for the Oregon Energy Facility Siting Council, said that large projects must prove they will comply with the noise ordinance and that noise waivers, or easements, are among the solutions. Asked if it was common for companies to pay people to sign such easements, Mr. Stoops said, “That’s probably a level of detail that doesn’t come to us.”

Ms. Pilz, the local Caithness representative, did not volunteer the information that Caithness offers people money to sign noise easements, though she eventually confirmed in an interview that it did. She also would not say how much money it offers, though several property owners said she had offered them $5,000.

“What we don’t do in general is change the market price for a waiver,” Ms. Pilz said. “That’s not fair.”

Some people who did not sign said that Ms. Pilz made them feel uncomfortable, that she talked about how much Shepherd’s Flat would benefit the struggling local economy and the nation’s energy goals, and that she suggested they were not thinking of the greater good if they refused.

“The lady that came said everyone else signed,” said Jarrod Ogden, 33, a farmer whose house would be directly opposite several 300-foot turbines once Shepherd’s Flat is completed. “But I know for a fact that some people didn’t. I’m all for windmills, but I’m not going to let them buy me like that. I think they’re just trying to buy cheap insurance.”

Developers at sites across the Devon and Cornwall countryside have been locked in bitter disputes over the noise pollution caused by giant wind turbines that campaigners claim damage people’s health.

Plans to erect nine turbines at Den Brook, near Crediton, Mid-Devon, await a decision from the High Court following a two-day hearing this week. Now it has emerged the Department for Energy and Climate Change (DECC) has commissioned a review to examine how planning authorities have applied guidance on noise pollution.

Energy ministers want to establish “best practice” on noise pollution and ensure communities get the “intended level of protection” after a series of onshore wind farm developments have suffered long delays in the courts.

But a prominent Westcountry objector last night questioned how much protection homes close to developments would be offered as the Government insisted it had “no plans” to change the guidance.

Mike Hulme, who has fought the Den Brook development for five years, said: “It is a positive step that something is happening. This is the result of many questions being asked by MPs. I think it is a result of being put under pressure rather it being a desirable thing to do.

“But I wonder what is underlying this report. Is it as smoke screen or is it a genuine attempt to rectify the problem?”

Mr Hulme, who argues “noise nuisance” has driven people from their homes, says guidelines to assess the noise impact of any wind farm – known as ETSU-R-97 – are now 12 years old and “dreadfully outdated”.

While the Government has indicated it is anxious to push the development of offshore wind farms, thousands of turbines have been earmarked on dry land.

While nausea, headaches and anxiety have been linked to people’s close proximity to wind farm developments, many have called for more independent research into the effects on health.

A study by a panel of independent experts this year found that the irritation caused by the swishing noise around wind farms can effect certain individuals.

Wind farms have traditionally been seen by protesters as a blot on the British countryside, but noise is emerging as a significant block to development.

Mr Hulme says it is the intermittent “thumping” sound caused by the fast-turning turbine blades that is the cause of most concern.

But he thinks it is unlikely the noise threshold will be lowered any time soon as it would “possibly eliminate too many sites” – putting the Government’s renewable energy drive at risk – despite noise being the “major issue” for most wind farm objections.

In two separate written questions by MPs, the Energy Secretary Chris Huhne was asked “whether he plans to revise the noise assessment guidance for wind turbines”.

In response Climate Change Minister Greg Barker, wrote: “Noise is a key issue to be taken into account in considering proposals for wind farm development.

“There is no reason to believe that the protection from noise provided for by the ETSU-R-97 guidance does not remain acceptable, and we have no plans to change this.”

He went on: “However, I have commissioned an analysis of how noise impacts are considered in the determination of wind farm planning applications in England.

“The project will seek to establish best practice in assessing and rating wind turbine noise by investigating previous decisions.

“Our aim is to ensure that ETSU-R-97 is applied in a consistent and effective manner and that it is implemented in a way that provides the intended level of protection.”

Consultants Hayes McKenzie is to start the work in September and it is hoped the it will be completed by the end of the year.
Posted by Mercury at 10:36 AM