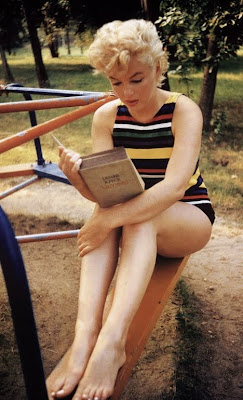 Yes, it is Marilyn Monroe.
So what! Tell me what will happen when the power ceases or the batteries run dry. Will the ambiance of a romantic interlude be lost when an electronic text is read under the oak tree?

The New York Times
Monday was a day for the history books — if those will even exist in the future.

Amazon.com, one of the nation’s largest booksellers, announced Monday that for the last three months, sales of books for its e-reader, the Kindle, outnumbered sales of hardcover books.

In that time, Amazon said, it sold 143 Kindle books for every 100 hardcover books, including hardcovers for which there is no Kindle edition.

The pace of change is quickening, too, Amazon said. In the last four weeks sales rose to 180 digital books for every 100 hardcover copies. Amazon has 630,000 Kindle books, a small fraction of the millions of books sold on the site.

Book lovers mourning the demise of hardcover books with their heft and their musty smell need a reality check, said Mike Shatzkin, founder and chief executive of the Idea Logical Company, which advises book publishers on digital change. “This was a day that was going to come, a day that had to come,” he said. He predicts that within a decade, fewer than 25 percent of all books sold will be print versions.

The shift at Amazon is “astonishing when you consider that we’ve been selling hardcover books for 15 years, and Kindle books for 33 months,” the chief executive, Jeffrey P. Bezos, said in a statement.

Still, the hardcover book is far from extinct. Industrywide sales are up 22 percent this year, according to the American Publishers Association.

The figures do not include free Kindle books, of which there are 1.8 million originally published before 1923 (they are in the public domain because their copyright has expired). Amazon does not specify how paperback sales compare with e-book sales, but paperback sales are thought to still outnumber e-books.

The big surprise, Mr. Shatzkin said, was that the day came during the first period that the Kindle faced a serious competitive threat. The Apple iPad, which started sales in April, is marketed as a leisure device for reading, and it has its own e-book store. Yet sales of the Kindle also grew each month during the quarter, Amazon said.

Amazon is being helped by an explosion in e-book sales across the board. According to the Association of American Publishers, e-book sales have quadrupled this year through May.

Amazon said its sales exceeded that growth rate. One reason Kindle book sales have held their own is that owners of iPads and other mobile reading devices buy Kindle books, which they can read on computers, iPhones, iPads, BlackBerrys and Android phones. But, except for the free uncopyrighted books, Kindle owners must buy or download content via Amazon. “Every time they sell a Kindle, they lock up a customer,” Mr. Shatzkin said.

Some industry analysts say that many people do not consider the iPad to be a reading device the way the Kindle is, and see a need to own both. Amazon’s latest sales figures are “clearly an indication that the iPad is complementary to the Kindle, not a replacement,” said Youssef H. Squali, managing director at Jefferies & Company in charge of Internet and new media research.

The growth rate of Kindle sales tripled after Amazon lowered the price of the device in late June to $189 from $259, Amazon said. That was moments after Barnes & Noble dropped the price of its Nook e-reader to $199 from $259.

Analysts said Amazon’s announcement could assuage investors’ concerns that the iPad threatens Kindle sales. Amazon’s stock price is down about 16 percent in the last three months, in part because of those fears.

“The sentiment’s turned a little more negative on the stock because of iPad issues and concern that Amazon would lose market share in the book segment,” said Aaron Kessler, director of Internet and digital media equity research at ThinkEquity.
Posted by Mercury at 11:03 AM