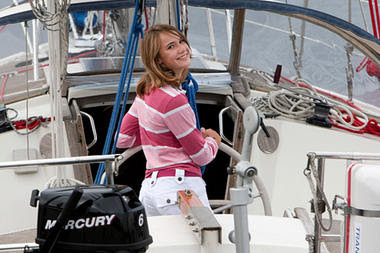 Laura Dekker has convinced a Dutch court that she's done her sailing homework and is ready to attempt to beat Jessica Watson's record around-the-world solo sail.

The Christian Science Monitor
Never underestimate the power of persuasion – especially when it comes from a child who knows her stuff. Laura Dekker is exhibit A.

After both her mom and a court ruled against such an attempt when she was 14 years old, she ran… um, sailed away anyway. And she would have gotten away with it, too, if it hadn’t been for a woman who recognized her three days after she disappeared on the Dutch Antilles island of St Maarten.

Almost eight months later, the still 14-year-old Laura has won both her mother’s and the Dutch Court's permission to attempt the voyage and thereby possibly beat Jessica's record as the youngest person to circumnavigate the globe solo.

The current official record is held by Mike Perham, who completed his round-the-world voyage last year when he was 17 years old. Since his accomplishment, record-keeping organizations have stopped recognizing "youngest" pursuits because of growing controversy.

Still, Jessica Watson completed the voyage in May and holds the (slightly contested) unofficial record.

Then there was 16-year-old Abby Sunderland from California whose attempt to snag the record was fraught with complications highlighting the risks of such solo voyages. After a wave snapped her mast in the southern Indian Ocean in June, she had to be rescued.

When her father was asked last year what he thought of his daughter being alone on the high seas at such a young age, Laurence Sunderland told the Los Angeles Times, "I wouldn't let her go at 13, or at 14, or at 15. There's a strength factor and they need to be mentally grounded in what this entails. It's not a frivolous thing. The ocean is terrifying and you have to be prepared for all the adversities that it throws at you."

Parents of both girls have faced mountains of criticism and had to defend their decision to let their children attempt such a dangerous trip.

Both sets of parents have said they’d let their girls do it again.

In Dekker's case, the court agreed. "We were able to show the court today that she has met all the court's conditions, and an indpeendent sail expert has approved her sailing plan," Dekker's lawyer Peter de Lange said.

She doesn't appear to have wasted any time. While the court (and her mom) deliberated, she’s acquired a bigger boat (a 38-foot twin-mast ketch) and equipped it with new navigation and safety equipment. Mr. De Lange also said Laura’s been doing her sailing-around-the-world homework: “Laura has obtained a first-aid diploma, registered with a distance education facility to continue her schooling at sea, gained solo sailing experience and learned sleep-management techniques.”

The New York Daily News reports that the Council for Child Protection in the Netherlands apparently wanted the court to extend the ban for another year to prevent her from making the trip. and still might appeal the decision arguing that being alone for two years could be mentally harmful to the teen.

Laura Dekker is hoping to complete the trip before September 2012, when she will turn 17.


Abby Sunderland and a parent's perspective

Thrill seekers to be restricted?
Posted by Mercury at 7:58 AM