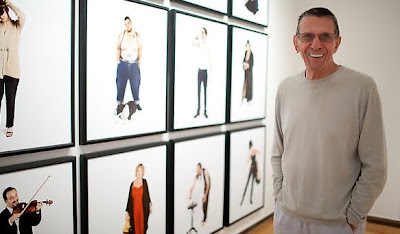 Camera go "crick" and wallah we have photographs to show.

The New York Times
A few people have bought a Leonard Nimoy photograph without knowing who Leonard Nimoy is. Most likely they are migrants who arrived here through a wormhole from the Gamma Quadrant, where “Star Trek” reruns have yet to penetrate.

Mr. Nimoy, who for more than 40 years was Spock, the pointy-eared, half-Vulcan science officer on the Starship Enterprise, has been an accomplished photographer for nearly that long, and his work has been collected by several museums. He has been taking pictures since he was 13, when he developed them in the family bathroom in Boston’s West End, and in the early 70’s he studied at the University of California, Los Angeles, with Robert Heinecken, a conceptual photographer so rigorous, Mr. Nimoy said recently, that he thought if you happened to see a body falling from the sky, you would be wrong to take a picture of it unless you were already embarked on a study of objects moving through space. Anything else was mere photojournalism.

In the mid-70’s Mr. Nimoy even considered quitting acting and taking up photography full time, and now, at 79, he says he is finally finished with movies and television. “I was really done a long time ago,” he said over lunch in a cafe at the Massachusetts Museum of Contemporary Art here. “But I agreed to make that last ‘Star Trek’ movie because I thought the Spock character hadn’t had a chance for closure.”

Still, though Mr. Nimoy has long been at pains to distance himself from “Star Trek” in his photographic work and his life in general — at one point even writing a book called “I Am Not Spock” — the Spock persona has proved to be as hard to escape as the Klingon prison planet. “The issue of crossing over from one territory to another — it’s always met with skepticism,” he said.

Michael Kusek, who posed for Mr. Nimoy’s most recent project, “Secret Selves,” wearing borrowed dog tags, swigging from a bottle of Jim Beam and generally trying to look tough and street-wise, said of first meeting the photographer: “There he was with that voice that has been in the background culturally my whole life. I blew my cool.” He added: “When I was a kid, I was always doing Spock. I can still do the eyebrow thing.”

“Secret Selves,” an exhibition of 26 color photographs, 11 of them life size, opens at Mass MoCA here on Saturday; it is Mr. Nimoy’s first solo show at a major museum. He got the idea for it from the passage in Plato’s “Symposium” speculating that humans were originally double-sided creatures, split apart by jealous gods and doomed forever to seek their lost other halves. Over a couple of very long days in 2008, he photographed 95 or so residents of nearby Northampton, Mass., who had been encouraged to reveal their hidden natures any way they chose.

In a foreword to the catalog (which includes 62 more photographs and a DVD documenting the shoot), Joseph C. Thompson, the director of Mass MoCA, writes, a little loftily, that despite a “haunting overabundance of id,” the photographs remind him of “caryatids — columns that cross-dress as figural sculpture.”

He adds: “This equivocation between’s the subject’s plastic, almost sculptural presence, and its literal groundedness, makes for compelling work, all the more so since these are our neighbors caught there.” Or, as one of the participants put it, the whole “Secret Selves” experience was “kind of like being at an awkward costume party.” A few of the subjects came forward in response to a newspaper article about the project, but most were rounded up by Richard Michelson, who owns a local gallery and is Mr. Nimoy’s primary dealer. Both in real life and on the museum wall they form a fairly representative cross-section of Northampton, an artsy college town known for its vigorous gay and lesbian community and for harboring a generous share of eccentrics and free spirits.

A local painter showed up for his session with Mr. Nimoy as a sort of wood sprite, covered in leaves and mud, and a foster-care mother parted her fur coat to show that she was wearing nothing underneath. One woman came with a sheep. Another, a psychotherapist, wielded a chainsaw. A rabbi came bare-chested and wearing leather, and Barry Moser, the well-known engraver and printmaker, immediately stripped naked and posed with his English mastiff. A transgendered former Marine appeared in a cancan costume. And a father and son posed together, dad dressed as a gangster and his teenage son, for some reason, as a shark — or more precisely, as he points out on the DVD, a shark with arms that shoot lasers.

“I tried to get some bankers, but they all turned me down,” Mr. Michelson said. “They told me they were just as boring on the inside as they are on the outside.” He did manage to recruit the mayor of Northampton, who showed up with an electric guitar, and the chief executive of an advertising firm, who had dressed himself as a wizard.

Because of some of his previous work — especially “The Full Body Project,” nude photographs of plus-sized women — several people showed up expecting just to take their clothes off, Mr. Nimoy said, and there were some others he felt uncomfortable with. “I sensed something too intensely felt, and I just didn’t want to get into that territory,” he said. “But mostly I was surprised by people’s openness and vulnerability. I had no idea what to expect.”

Typically, Mr. Nimoy chatted with his subjects for a few minutes, and then, not unlike a film director, encouraged them to express their inner selves. Most responded warmly and immediately, though Matt Mitchell, the wood sprite, said that at first he had trouble with Mr. Nimoy’s instruction.

“He wanted me to pose like a tree and I was like: ‘A tree? I’m supposed to be like the earth itself.’ ” (Mr. Mitchell had initially been reluctant to pose, he added, until he realized that in his own work, painting portraits of Americans who have served in Iraq and Afghanistan, he asks people to expose themselves in a very similar way.)

For at least two of the subjects, the experience of being photographed proved transformative. A writer who posed with a violin but had to be shown how to hold it has since taken up the instrument for real. And Tammy Twotone, the transgendered former Marine, decided to stop living a double life. “During the day I would switch back to living the life of a male,” she explained at Mr. Michelson’s gallery, joking that she was Clark Kent during the daytime and Rita Hayworth at night.

“I had been wanting to fully transition for years but couldn’t figure out how to make the change,” she went on. “Mr. Nimoy was very blunt and straightforward. He sort of whittled things down, trying to get a sense of who I am, and at one point he asked, ‘How do you do it?’ I was stumped. No one had ever asked me that before. How do you do that? And a week or two after meeting him I decided to fully transition. I became much more relaxed, and it seemed like everything was a lot simpler.”

Mr. Nimoy visited Mass MoCA on Friday and saw the show for the first time. “Oh my,” he said. “I’m very, very happy with this.”

Looking at one of the life-size portraits, he added: “So many people have said that the project has made them wonder about whether they have a secret self, and inevitably some of them ask about my secret self. Are you kidding? I’ve had 60 years of acting out my other selves. Been there, done that. I’ve been the good guy, the bad guy, the psycho, the alien. I’ve done it all. They’re all out there.”
Posted by Mercury at 4:38 PM