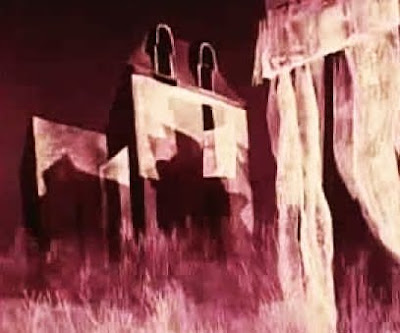 I am sure you remember these films. Most were of the educational or vocational nature...topics on class room discipline, dating, marriage, personal hygiene, or government or being a brick layer, carpenter, Linotype operator...Discipline During Adolescence [1958], Each Child Is Different [1954], Quacks and Nostrums [1959], Your Body During Adolescence [1955], Your Junior High Days [1963] and Willard Van Dyke's This Charming Couple [1950].

These and others are available at the Internet Archive .

But McGraw-Hill films were the first to offer an introduction to philosophy that incorporated movies as a key pedagogical element. Others were the Encyclopedia Britannica and Young America Films.

They championed top animators and promoted thoughtful, philosophical questions. Here is one sample.

Its plot concerns a hangman who arrives at a town and executes the citizens one by one. As each citizen is executed, the others are afraid to object out of fear that they will be next. Finally there is nobody remaining in the town except the Hangman and the narrator of the poem. The narrator is then executed by the hangman as there is no one left who will defend him.

The poem contains four-line stanzas with the rhyming pattern AABB.

The poem is usually cited as an indictment of those who stand idly by while others committed grave evil or injustice, such as The Holocaust. It has often been interpreted as an attack on McCarthyism.

A cynical look at how humankind loves to feed others into the death machine, from a disturbing poem by Maurice Ogden, read by Herschel Bernardi. Shadows and shifting geometric planes lend a Chirico-like quality to Paul Julian's animation.

Into our town the Hangman came,
Smelling of gold and blood and flame.
And he paced our bricks with a diffident air,
And built his frame in the courthouse square.

The scaffold stood by the courthouse side,
Only as wide as the door was wide;
A frame as tall, or little more,
Than the capping sill of the courthouse door.

And we wondered, whenever we had the time,
Who the criminal, what the crime
That the Hangman judged with the yellow twist
of knotted hemp in his busy fist.

And innocent though we were, with dread,
We passed those eyes of buckshot lead --
Till one cried: "Hangman, who is he
For whom you raised the gallows-tree?"

Then a twinkle grew in the buckshot eye,
And he gave us a riddle instead of reply:
"He who serves me best," said he,
"Shall earn the rope of the gallows-tree."

And he stepped down, and laid his hand
On a man who came from another land.
And we breathed again, for another's grief
At the Hangman's hand was our relief

And the gallows-frame on the courthouse lawn
By tomorrow's sun would be struck and gone.
So we gave him way, and no one spoke,
Out of respect for his Hangman's cloak.

The next day's sun looked mildly down
On roof and street in our quiet town,
And stark and black in the morning air
Was the gallows-tree in the courthouse square.

And the Hangman stood at his usual stand
With the yellow hemp in his busy hand;
With his buckshot eye and his jaw like a pike
And his air so knowing and business-like.

And we cried, "Hangman, have you not done
Yesterday, with the foreign one?"
Then we fell silent, and stood amazed,
"Oh, not for him was the gallows raised."

He laughed a laugh as he looked at us:
"Did you think I'd gone to all this fuss
To hang one man? That's a thing I do
To stretch a rope when the rope is new."

Then one cried "Murder!" and one cried "Shame!"
And into our midst the Hangman came
To that man's place. "Do you hold," said he,
"with him that was meant for the gallows-tree?"

And he laid his hand on that one's arm.
And we shrank back in quick alarm!
And we gave him way, and no one spoke
Out of fear of his Hangman's cloak.

That night we saw with dread surprise
The Hangman's scaffold had grown in size.
Fed by the blood beneath the chute,
The gallows-tree had taken root;

Now as wide, or a little more,
Than the steps that led to the courthouse door,
As tall as the writing, or nearly as tall,
Halfway up on the courthouse wall.

The third he took -- we had all heard tell --
Was a usurer, and an infidel.
"What," said the Hangman "have you to do
With the gallows-bound, and he a Jew?"

And we cried out, "Is this one he
Who has served you well and faithfully?"
The Hangman smiled: "It's a clever scheme
to try the strength of the gallows-beam."

The fourth man's dark, accusing song
Had scratched our comfort hard and long;
"And what concern," he gave us back.
"Have you for the doomed -- the doomed and Black?"

The fifth. The sixth. And we cried again,
"Hangman, Hangman, is this the man?"
"It's a trick," he said. "that we hangmen know
For easing the trap when the trap springs slow."

And so we ceased, and asked no more,
As the Hangman tallied his bloody score.
And sun by sun, and night by night,
The gallows grew to monstrous height.

The wings of the scaffold opened wide
Till they covered the square from side to side;
And the monster cross-beam, looking down,
Cast its shadow across the town.

Then through the town the Hangman came,
Through the empty streets, and called my name --
And I looked at the gallows soaring tall,
And thought, "There is no one left at all

For hanging, and so he calls to me
To help pull down the gallows-tree."
So I went out with right good hope
To the Hangman's tree and the Hangman's rope.

He smiled at me as I came down
To the courthouse square through the silent town.
And supple and stretched in his busy hand
Was the yellow twist of the hempen strand.

And he whistled his tune as he tried the trap,
And it sprang down with a ready snap --
And then with a smile of awful command
He laid his hand upon my hand.

"You tricked me. Hangman!," I shouted then,
"That your scaffold was built for other men...
And I no henchman of yours," I cried,
"You lied to me, Hangman. Foully lied!"

Then a twinkle grew in the buckshot eye,
"Lied to you? Tricked you?" he said. "Not I.
For I answered straight and I told you true --
The scaffold was raised for none but you.

For who has served me more faithfully
Then you with your coward's hope?" said he,
"And where are the others who might have stood
Side by your side in the common good?"

"Dead," I whispered. And amiably
"Murdered," the Hangman corrected me:
"First the foreigner, then the Jew...
I did no more than you let me do."

Beneath the beam that blocked the sky
None had stood so alone as I.
The Hangman noosed me, and no voice there
Cried "Stop!" for me in the empty square.
Posted by Mercury at 10:09 AM