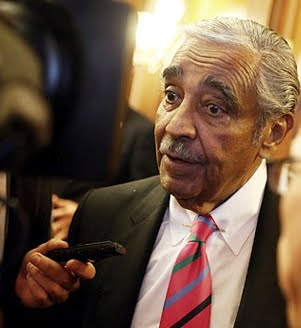 This was swift congressional action. Is Congress trying to spruce up their image. NOT. Do recall the former Republican Party [GOP] House Majority Leader from 2003–2005...Tom DeLay who was charged with criminal violations of state campaign finance laws and money laundering. As of July 2010, the prosecutor has yet to bring the case before a jury. I wonder why.

The New York Times
A House investigative panel has found “substantial reason to believe” that Representative Charles B. Rangel violated a range of ethics rules, dealing a serious blow to Mr. Rangel, a Harlem Democrat, in the twilight of his political career.

The finding means that he must face a public trial before the House ethics committee, the first member of Congress to be forced to do so since 2002, when Representative James A. Traficant Jr. was expelled from Congress after a corruption conviction.

The investigative panel did not disclose any details about the nature of the violations.

But two Democrats with knowledge of the investigation said the committee found evidence to support accusations that Mr. Rangel, 80, wrongly accepted four rent-stabilized apartments in Manhattan and misused his office to preserve a tax loophole worth half a billion dollars for an oil executive who pledged a donation for an educational center being built in Mr. Rangel’s honor.

The committee also found evidence to support a charge that Mr. Rangel failed to report or pay taxes on rental income from his beachfront Dominican villa.

They are among the most serious of the assortment of charges against Mr. Rangel that the panel has been examining for nearly two years.

Mr. Rangel, who has dismissed the accusations since they were first made in 2008, continued to contest them on Thursday and said he looked forward to publicly rebutting them. “I am pleased that, at long last, sunshine will pierce the cloud of serious allegations that have been raised against me in the media,” Mr. Rangel’s statement said.

Mr. Rangel, who in March gave up his seat as chairman of the House Ways and Means Committee in response to a separate ethics issue, has spent nearly $2 million fighting to clear himself in the various investigations as he seeks a 21st term this fall.

His office said Thursday that there was no possibility he would withdraw from the race or resign. But his mounting problems have become a liability for Democrats nationally as they seek to retain their control of the House. Republicans have criticized Speaker Nancy Pelosi, Democrat of California, for not moving more swiftly and decisively to discipline Mr. Rangel.

“Today’s announcement is a sad reminder of Speaker Pelosi’s most glaring broken promise: to ‘drain the swamp’ in Washington,” said Representative John A. Boehner, Republican of Ohio, the House minority leader.

There were indications on Thursday that New York’s Democratic leaders would rally around Mr. Rangel, at least for now. But at least one of his opponents, Mr. Tasini, called for the representative to drop out of the race, saying that his presence in the contest posed a “threat to the future of the Democratic Party.”

“The Republicans will make him the face of Washington corruption,” Mr. Tasini said. “It is not good for the party or for New York.”

The findings on Thursday were made by a four-member bipartisan investigative subcommittee of the full House Committee on Standards of Official Conduct. They will be aired at a public trial before an adjudicatory subcommittee, which will report to the full committee about whether it substantiated the findings. If the accusations are substantiated, the full committee then decides on what punishment should occur, from a letter rebuking him to a recommendation that he be expelled from the House.

The investigative panel began its work in September 2008 after The New York Times reported that Mr. Rangel accepted four rent-stabilized apartments from a developer at a price below market value, despite rules forbidding House members from taking gifts worth more than $50.

The units, one of which he used for his campaign, are in Lenox Terrace, a luxury complex in Harlem. Mr. Rangel paid a total of $3,894 monthly for the four units, while the market-rate rent for similar apartments in his building would total $7,465 to $8,125 a month, according to the Web site of the owner, the Olnick Organization.

After years of Mr. Rangel’s facing little opposition or scrutiny, the revelations about his arrangement set off a flurry of questions and aggressive examination of his personal finances and fund-raising.

The panel also examined whether Mr. Rangel had improperly used his position as chairman of the Ways and Means Committee to preserve a tax loophole worth more than half a billion dollars for the oil company whose executive, Eugene Isenberg, had promised $1 million for the Charles B. Rangel Center for Public Service at City College of New York. It also was exploring whether Mr. Rangel broke ethics rules when he failed to report taxable income received from the Dominican villa.

Mr. Rangel, who was first elected to the House in 1970, has usually coasted to re-election thanks to deep popularity in his district and his ability to deliver money and projects to the city.

His life story has been one of overcoming seemingly insurmountable challenges, dating to his service in the Korean War when he nearly froze to death while under attack by the Chinese, so New York politicians have been skittish about how the ruling would affect the outcome of the September primary.

“It means the investigation is still taking its course,” said Keith L. T. Wright, a State Assembly member. “It is not time for him to resign. I fully expect for him to be re-elected this fall and carrying the concerns of the people of Harlem down to Washington.”

As recently as this month, Mr. Rangel was boasting about how his constituents in Harlem were coming to his defense, despite the long-running investigation. And he showed no signs of considering retiring. “This is not the time to be hanging up the gloves,” he said in an interview last month.

Still, it is not clear whether Mr. Rangel, a proud and combative figure, will want to face the public spectacle of a trial. Democratic leaders, eager to contain the damage from his troubles, may push him to step aside in the coming weeks. If Mr. Rangel resigns from the House, the proceedings against him would almost certainly end.

In March, Mr. Rangel was admonished by the ethics committee for trips he and other members of the Congressional Black Caucus took to the Caribbean in 2007 and 2008 that were indirectly paid for by corporate sponsors like Pfizer, Verizon and AT&T, in violation of House rules.

On Thursday, after the findings were released, reporters pressed Mr. Rangel for a response. The congressman slapped away a question from Luke Russert of MSNBC about whether the inquiry might cost him his job.

“Basically you know it’s a dumb question, and I’m not going to respond,” he said.
Posted by Mercury at 10:52 AM