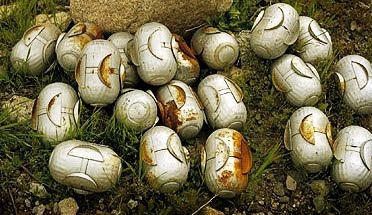 Cluster Bombs
Nothing new about US arms deals but it just appears to defeat an ethical purpose. What a "cash cow".

Reuters
U.S. arms sales will be little changed in fiscal 2010 but could surge by nearly one-third to $50 billion next year, the Pentagon's chief arms seller told Reuters in an interview.

The U.S. government arms sales for the current year, which ends September 30, are likely to be close to $37.8 billion, said Vice Admiral Jeffrey Wieringa, director of the Pentagon's Defense Security Cooperation Agency.

Wieringa, who says he is looking forward to driving his two Corvettes and a jet ski when he retires at the end of the month, had forecast last October at the Dubai air show that weapons sales could reach a record $50 billion this year. Now, he believes that figure is more likely to be hit next year.

"A lot of countries have built up cash reserves and they intend to continue buying," Wieringa said.

The Pentagon agency, which overseas major foreign arms sales, is likely to notify Congress of a large number of arms sales over the next few months, said Wieringa, who oversees 12,995 different arms sales involving 218 countries and retires with total of $300 billion of requests still open.

One deal that has already been included in the Pentagon's accounting of weapons sales is a big sale of Lockheed Martin Corp fighter jets to Israel, which was first approved by the Pentagon in September 2008.

Wieringa said the U.S. government is days away from signing an agreement with Lockheed for an initial purchase of 19 warplanes, with options to buy a total of 75 planes , said Wieringa.

The sale to Israel would be the first foreign military sale of the new warplane to a foreign country outside of the eight partner nations that are helping to develop the plane.

Over the past decade, U.S. arms sales have grown from $8 billion, and they are likely to continue growing in coming years, Wieringa said, noting that a recent major review of defense programs has emphasized the need for greater security cooperation with countries around the world.

Among the biggest potential arms deals on the table now are huge fighter jet competitions in India and Brazil, various modernization programs for Saudi Arabia, and continuing support for arms sales to Iraq, Afghanistan, Pakistan and Lebanon.

Wieringa has worked hard to expand training and staffing for U.S. military and civilian workers involved in global arms sales, boosting his agency's budget from $373 million in fiscal 2007 to an estimated $850 million in the fiscal 2012 budget being drafted now.
Posted by Mercury at 11:11 AM