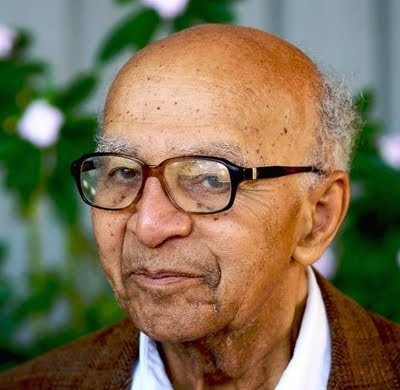 Blackwell, who taught at Berkeley for nearly 35 years, was also the first black scholar in the National Academy of Sciences

The Los Angeles Times
David Blackwell, a preeminent mathematician and the first black scholar in the National Academy of Sciences, died July 8 at Alta Bates Summit Medical Center in Berkeley. He was 91 and had had a series of strokes.

Blackwell was known as a problem-solver who contributed to many areas, including probability and game theory.

"He liked elegance and simplicity," UC Berkeley statistics professor Peter Bickel said. "That is the ultimate best thing in mathematics — if you have an insight that something seemingly complicated is really simple."

Blackwell referred to himself as "sort of a dilettante" in an interview for the 1985 book "Mathematical People: Profiles and Interviews." He said he chose problems because he wanted to understand them, independent of what field they might fall under.

David Harold Blackwell was born in Centralia, Ill., on April 24, 1919. He was the eldest child of a railway worker who had a grade-school education.

Blackwell entered the University of Illinois at 16 and earned a doctorate in 1941 when he was 22. After graduation, he was appointed a postdoctoral fellow at the Institute for Advanced Study in Princeton, N.J.

Blackwell applied for teaching jobs at more than 100 black colleges, reasoning that he wouldn't be hired at white schools.

He worked for short periods as a statistician in the U.S. Office of Price Administration, at Southern University in Baton Rouge, La., and at Clark College in Atlanta. He was courted by Berkeley and said in an oral history interview that he was nearly hired in 1942. But his appointment was blocked because of his race.

In 1944, he joined the Howard University faculty. By 1947, he was head of the mathematics department, a position he held until 1954, when he was hired by Berkeley. Blackwell was the first tenured black professor at the campus, where he taught for nearly 35 years until his retirement in 1988.

He won the John von Neumann Theory Prize from the Operations Research Society of America and the Institute of Management Sciences in 1979. He also wrote two books, published more than 80 papers and held 12 honorary degrees from Harvard, Yale, Carnegie Mellon, Howard and other universities.

Blackwell is survived by his son Hugo of Berkeley; and daughters Ann Blackwell and Vera Gleason of Oakland and Sarah Hunt of Houston. His wife of 62 years, Ann Madison Blackwell, died in 2006. Four of his children are deceased.

The New York Times
David Blackwell, a statistician and mathematician who wrote groundbreaking papers on probability and game theory and was the first black scholar to be admitted to the National Academy of Sciences, died July 8 in Berkeley, Calif. He was 91.

The death was confirmed by his son Hugo.

Mr. Blackwell, the son of a railroad worker with a fourth-grade education, taught for nearly 35 years at the University of California, Berkeley, where he became the first black tenured professor.

He made his mark as a free-ranging problem solver in numerous subdisciplines. His fascination with game theory, for example, prompted him to investigate the mathematics of bluffing and to develop a theory on the optimal moment for an advancing duelist to open fire.

“He went from one area to another, and he’d write a fundamental paper in each,” Thomas Ferguson, an emeritus professor of statistics at the University of California, Los Angeles, told the Berkeley Web site. “He would come into a field that had been well studied and find something really new that was remarkable. That was his forte.”

David Harold Blackwell was born on April 24, 1919, in Centralia, Ill. Early on, he showed a talent for mathematics, but he entered the University of Illinois with the modest ambition of becoming an elementary school teacher. He earned a bachelor’s degree in mathematics in 1938 and, adjusting his sights, went on to earn a master’s degree in 1939 and a doctorate in 1941, when he was only 22.

After being awarded a Rosenwald Fellowship, established by the clothing magnate Julius Rosenwald to aid black scholars, he attended the Institute for Advanced Study at Princeton but left after a year when, because of his race, he was not issued the customary invitation to become an honorary faculty member. At Berkeley, where the statistician Jerzy Neyman wanted to hire him in the mathematics department, racial objections also blocked his appointment.

Instead, Mr. Blackwell sent out applications to 104 black colleges on the assumption that no other schools would hire him. After working for a year at the Office of Price Administration, he taught briefly at Southern University in Baton Rouge, La., and Clark College in Atlanta before joining the mathematics department at Howard University in Washington in 1944.

While at Howard, he attended a lecture by Meyer A. Girshick at the local chapter of the American Statistical Association. He became intensely interested in statistics and developed a lifelong friendship with Girshick, with whom he wrote “Theory of Games and Statistical Decisions” (1954).

As a consultant to the RAND Corporation from 1948 to 1950, he applied game theory to military situations. It was there that he turned his attention to what might be called the duelist’s dilemma, a problem with application to the battlefield, where the question of when to open fire looms large.

His “Basic Statistics” (1969) was one of the first textbooks on Bayesian statistics, which assess the uncertainty of future outcomes by incorporating new evidence as it arises, rather than relying on historical data. He also wrote numerous papers on multistage decision-making.

“He had this great talent for making things appear simple,” Peter Bickel, a statistics professor at Berkeley, told the university’s Web site. “He liked elegance and simplicity. That is the ultimate best thing in mathematics, if you have an insight that something seemingly complicated is really simple, but simple after the fact.”

Mr. Blackwell was hired by Berkeley in 1954 and became a full professor in the statistics department when it split off from the mathematics department in 1955. He was chairman of the department from 1957 to 1961 and assistant dean of the College of Letters and Science from 1964 to 1968. He retired in 1988.

In 1965 he was elected to the National Academy of Sciences.

In addition to his son Hugo, of Berkeley, he is survived by three of his eight children, Ann Blackwell and Vera Gleason, both of Oakland, and Sarah Hunt Dahlquist of Houston; a sister, Elizabeth Cowan of Clayton, N.C.; and 14 grandchildren.

Mr. Blackwell described himself as a “dilettante” in a 1983 interview for “Mathematical People,” a collection of profiles and interviews. “Basically, I’m not interested in doing research and I never have been,” he said. “I’m interested in understanding, which is quite a different thing. And often to understand something you have to work it out yourself because no one else has done it.”


David Blackwell [Wikipedia]
Posted by Mercury at 4:33 AM