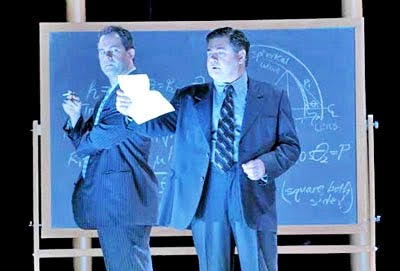 An exception to the following...the opera "Dr. Atomic". [Enter same in the blog's search engine for more.]

"Why does theatre plus science equal poor plays?"

As science advances, let's hope the drama it inspires improves as well

guardian.co.uk
Title of experiment: Examination of Plays about Science.

Purpose: To determine why so few good plays about maths and science are written, when fine dramas about other academic disciplines – art, literature, history, politics – abound. (And why has wood shop never yet produced even a comedy?)

Materials: A shelf full of scripts, a defective laptop, chats with colleagues.

Description: The week before last I saw two pretty dreadful plays about science, the truly dismal Sweet, Sweet Motherhood, ostensibly about genetics, and Lovesong of the Electric Bear by Snoo Wilson, a jumped-up bioplay about artificial intelligence pioneer Alan Turing. The scripts were rather different. Where Motherhood was obnoxiously prurient, Lovesong, narrated by a teddy bear, was irritatingly cutesy. And yet they shared a squeamish attitude towards the scientific disciplines that inspired them. The co-writers of Motherhood dumbed down theoretical propositions into theatrical pablum. Wilson ignores Turing's actual discoveries until nearly the end of the play, saving the occasional mention of hyperboloids. Complicite's A Disappearing Number, which also played last week and which I unfortunately missed, appears to have done a much better job at marrying geometry with dramaturgy.

Great plays about science do exist. I can think of no more eloquent evocation of the second law of thermodynamics than Tom Stoppard's Arcadia, and in The Doctor's Dilemma, George Bernard Shaw used "an exact record of an actual discovery in serum therapeutics" to inspire a sprightly and affecting comedy. There are more, but not many more – Brecht's Galileo, Dürrenmatt's The Physicists. And several that are certainly very good: David Auburn's Proof, Michael Frayn's Copenhagen, Rolin Jones's The Intelligent Design of Jenny Chow. (And, yes, I realise how overwhelmingly male that catalogue is. Even more so than the sciences themselves.) So what makes for a successful play about science and why is it so difficult to achieve?

Taking the subway home after two and a half hours of Lovesong, I proposed this question and my friend said she thought that when confronted with what she called "the real", playwrights find themselves in thrall. They get so overwhelmed by actual laws of the universe that they forget those of dramatic construction. I'm not sure I agree. It seems to me that in most plays about science that I see – often those sponsored by the Alfred P Sloan Foundation, an organisation with a nifty mission to encourage playwrights to tackle science, but with indifferent results – any actual science is little more than name-checked in favour of some soap opera about the struggles of its diviner. Such a method ignores the fact that though new discoveries are inherently interesting, the same cannot be said of the discoverers themselves.

Results: So I'm left to wonder if all that left-brain material rather intimidates the normal run of playwrights and they try and write around it rather than fully engage with its complexities. Stoppard and Shaw do engage and perhaps that's why their plays seem to me so excellent and so rare. Rather than making the scientific stuff intelligible to the average layperson, perhaps writers should let it remain difficult, let the audience struggle a bit, allow certain principles to remain complicated and elegantly remote. And perhaps writers and directors can make use of the available theatrical technologies to render these theorems more vividly.

But as science continues to advance, perhaps the plays it inspires will improve as well. It could be that we're only a few short years away from a momentous tragedy based on Carl Linnaeus, mere months shy of an uproarious comedy drawn from the papers of Gregor Mendel. Somewhere, surely, these formulae exist.
Posted by Mercury at 5:22 AM