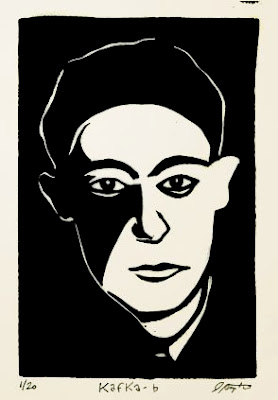 BBC News
Safe deposit boxes believed to contain manuscripts and drawings by the late author Franz Kafka are due to be opened at a bank in Zurich.

The move is the latest twist in a long legal battle over who owns the papers.

Two Israeli sisters say they inherited the documents from their mother, but the Israeli state claims them as part of the country's cultural heritage.

The contents will be examined by an expert who will report to the judge handling the case.

Literary archives around the world say the manuscripts, hidden for decades, must at least be made public.

Franz Kafka was one of the most enigmatic authors of the 20th Century.

He died of tuberculosis in 1924 aged only 40 and, if his own last wishes had been followed, novels such as The Trial and The Castle would never have seen the light of day.

Kafka asked his friend and fellow writer, Max Brod, to burn his manuscripts after his death. Brod refused, publishing the novels and taking letters and other writings to Israel where he left them to his secretary Esther Hoffe - who then bequeathed them to her two daughters.

At some point during the past 50 years, the documents were stored in bank vaults in Tel Aviv and Zurich.

But when the two daughters - now both in their 70s - tried to sell some of the manuscripts, the legal battle began.

Israel is claiming the documents as part of its cultural heritage arguing that because Kafka was Jewish, his works belong there.

The sisters say the works are their rightful inheritance to dispose of as they wish. Meanwhile, Germany's literary archive has offered to buy the manuscripts.

Today, on the orders of a Tel Aviv judge, the four vaults in Zurich will be opened but only for the eyes of one Kafka specialist who will itemise the contents and report back to the judge.

For the general public, the mystery of Kafka's remaining works will continue.

guardian.co.uk
Franz Kafka wanted all his manuscripts to be burned after his death, but his friend Max Brod disregarded the request, seeding a complex legal battle over thousands of manuscripts that has the literary world agog. That legal tussle takes a new twist today as four safety deposit boxes in a Zurich bank containing the manuscripts are opened.

The boxes are believed to contain thousands of manuscripts by Kafka and Brod, including letters, journals, sketches and drawings, some of which have never been published and could provide literary detetectives an insight into one of the 20th century's greatest writers.

The move in Zurich follows similar action at two Tel Aviv banks, which were ordered by an Israeli tribunal to extract Kafka's works from their vaults.

The documents form the heart of a dispute over ownership between the state of Israel and the Hoffe sisters who say they inherited Kafka's estate from their mother Esther Hoffe – Brod's secretary. Brod not only ignored Kafka's wishes but published his work and bequeathed the originals to Esther Hoffe.

Israel, however, claims that Kafka's documents are the property of the state as Brod migrated to Israel in 1939.

The judge will then decide whether to return the documents to the safety deposit boxes or transfer them to a public archive, to be published for the benefit of future generations.

Meanwhile, the Israeli court is expected to rule on Hoffe's petition calling for a gag order on the contents of the box. The Israeli paper, Haaretz, has asked the court to allow the documents to be published, citing their public and literary value.

Kafka died from tuberculosis in 1924, leaving a set of instructions to Brod: "Dearest Max, My last request: Everything I leave behind me [is] to be burned unread." But Brod instead published for the first time Kafka's novels The Trial, The Castle and Amerika.

In 1939 Brod fled his home in Prague as the Nazis approached and took a single suitcase of Kafka papers to Tel Aviv, where he started a new life. He later donated manuscripts of The Castle and Amerika to Oxford University, but kept the original of The Trial for himself.

After the death of his wife, Brod began a relationship with his assistant, Esther Hoffe. When he died in 1968, he left a will that is now disputed. She sold documents over several years and when she died in 2007 ago she left the remaining papers to her daughters Eva and Ruti.