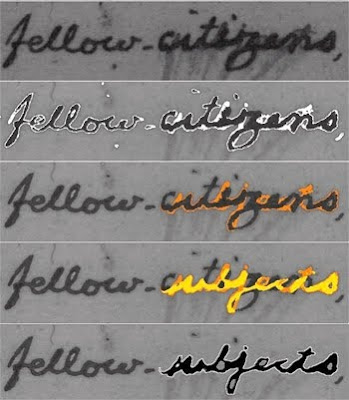 BRIGHT SIDE OF NEWS
LED-based analysis is shining a light beneath the final layer of ink on a revered United States document. It revealed how Thomas Jefferson set the tone for the new nation’s philosophy. A scientific review of a draft version of the Declaration of Independence exposed an altered word that pointed America away from tyranny towards democracy.

Hyperspectral analysis can view an object through 13 varying light bands, that go from what the human eye can see to ultraviolet and infrared at each end of the light spectrum which we can’t see unaided. The various pigments, inks, and paper treatments appear differently under certain wavelengths of light. Some materials reflect particular wavelengths, while other materials absorb the same wavelengths. The patterns of reflectance and absorption across wavelengths help identify different materials.

A 39 megapixel camera snapped a record of what each type of light uncovered. What Dr. Fenella France, a Library of Congress research scientist, found after hours of careful investigation was the word "subjects" concealed beneath the superimposed word "citizens." Jefferson in one brief white-out moment, set in motion the basis of American governance.

Non-destructive and non-invasive hyperspectral analysis has been used on a portion of the Dead Sea Scrolls, as well as the oldest known copy of the New Testament, the Khaboris Codex, and on the first map to identify "America," known as the Waldseemuller 1507 World Map. Hyperspectral analysis in this case is directed at paper & parchment in particular, but also has been implemented in analyzing Sarvamoola granthas manuscripts which have characters filled with ink that are incised on palm leaves using a metal stylus.

Dr. France who studied in New Zealand and Australia, is an international specialist on protein aging and object deterioration. She focuses on links between mechanical properties and chemical changes from environmental damage in the preservation of artifacts. She was working on the Declaration of Independence with the hyperspectral imaging system located in the Optical Properties Laboratory at the Library of Congress.

The document under scrutiny had been in an oxygen-free safe depository for 15 years. It was brought out for a demonstration of the hyperspectral analysis two days before America’s 4th of July Independence Day festivities. The two pages of white legal-sized paper, inscribed front and back, were carefully monitored by a police escort. It was the first time news of the overwritten word was publicized, although it had been under study for almost a year. Other corrections had been made to the text by John Adams and Benjamin Franklin, also American revolutionaries, and founders of the new nation.
Posted by Mercury at 4:48 AM