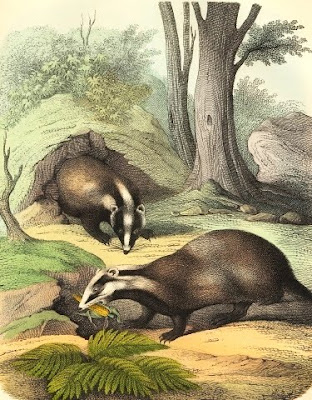 BBC NEWS
A controversial cull of around 1,500 badgers in south-west Wales has been halted after protesters won their legal challenge to stop it.

The Badger Trust appealed against Welsh Assembly Government plans for a trial cull to reduce TB within cattle.

The assembly government said it was "disappointed" with the Court of Appeal's judgement.

Wales' Rural Affairs Minister Elin Jones said she would need to consider the judges' decision in detail before deciding the next steps.

However, Badger Trust solicitor Gwendolyn Morgan said: "Welsh Assembly Government has indicated that they will accept today's decision and will not appeal to the Supreme Court."

Three law lords announced the trust's appeal against a judicial review was successful and quashed the order.

Lord Justice Pill said the assembly government was wrong to make an order for the whole of Wales when it consulted on the basis of a Intensive Action Pilot Area (IAPA) which only supported a cull on evidence within the IAPA.

He said if the order had been confined to the IAPA in north Pembrokeshire, he would have dismissed the appeal.

Plans for a pilot cull of badgers within a 288 sq km (111 sq miles) area of south-west Wales were outlined in September 2008.

The go-ahead was given in January.

The exact area of the proposed cull had not been given; but it was known to lie mostly in north Pembrokeshire, extending into Ceredigion and Carmarthenshire.

More than half the TB compensation paid out across Wales goes to farmers in the area.

Under the cull, badgers were to be trapped in cages and shot.

Anti-cull protesters, led by the Badger Trust, argued it had not yet been scientifically proven that badgers are implicated in the transmission of TB within cattle and it doubts a cull would help eradicate the disease.

On 11 June, the trust won leave to appeal against the outcome of a judicial review that backed the assembly government's plans.
'Sources of infection'

Following the appeal decision, Geoff Hayden from the Badger Trust, said he was "relieved with the result".

"But I have to say there were no winners in the appeal court today," he added.

"The disease is still there, animals are still being culled. There's a real risk now of some farmers taking the law into their own hands - both sides agree that really is the worst scenario."

"I am disappointed with this judgement particularly as the court recognises the serious impact that bovine TB is having in Wales and the need to tackle the disease," she said.

"We will now need to consider the judges' decision in detail before deciding our next steps.

"It is however clear that if we don't tackle all sources of infection we will not eradicate it."