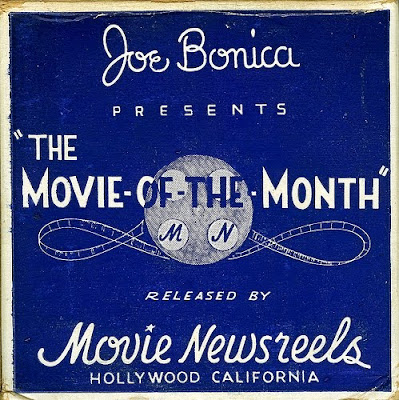 Before DVDs, CDs, video tape, a lot of entertainment was provided by home film...8mm, super 8, 16mm film stock. The subject matter was wide: Stag films, classics, cartoons, news...and yes pornography. Joe Bonica was one of the players and there is nothing on the Internet about him. He did offer something called "Movie of the Month"...16mm black & white shorts [one reelers up to 400']. I had a few of these at one time including the two below. The second offering is a burlesque featurette of Amalia Aguilar a Cuban dancer and actress.

Joe Bonica's Movie of the Month 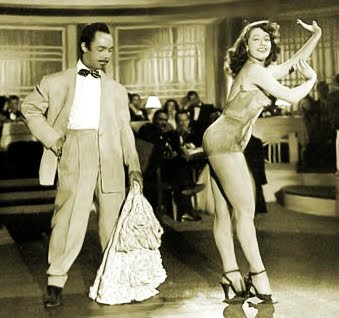 Though no director is noted, it is widely reported to have had Russ Meyer as cinematographer & defacto director, though I don't know that this is at all likely even though Meyer did begin his career photographing burlesque acts before heading on to bigger sexploitation projects with his name proudly attached.

The date of her two short-short dance films seem to be unknown, but she first appeared on film as an exotic dancer in 1946, & there's a good chance these two under-three-minute films were created for adults-only soundie exhibition in a panoram jukebox, which would date the films around 1947, when she was in the United States performing the burlesque circuit.

By 1949 she was developing a legitimate film career & getting to be a serious star in Carribean, Central, & South American countries, & less apt to have agreed to these short-shorts.

However, they found their way into the possession of Joe Bonica in the mid-1950s & were distributed as a single film for the home-projection market in 16 mm. One website claims these were made in Harlem in 1960, but that doesn't seem substantiated at all, & would more likely be on a Hollywood soundstage somewhere, when she was performing in a Los Angels niteclub.

She begins her dance performance in a "fallen" position on the floor & slowly rises to a Carribean beat, presenting a tray of tropical deli items. She then proceeds to perform a hot bellydance which is pretty fast moving. Halfway through the performance she gives an almost creepy cackle & bursts into an even swifter dance.

Amalia Aguilar appeared in a number of Spanish language musicals of the 1950s. She seems in the United States to have been categorized or even dismissed as "only" an exotic dancer as early as 1947 when she appeared in A Night in the Follies documenting a stage show at a Los Angeles burlesque house called the Follies Theater.

She would certainly have aroused customers who wanted to be aroused but really it's just a fine performance, & even if it is of the burlesque type, it is a high end example, derived from Cuban-Yoruba tradition.

It doesn't descend into a striptease, but more a throwback to jazz dance of the Harlem Renaissance. She could easily have danced at the Cotton Club with Duke Ellington during his "jungle" period or with Cab Calloway anytime at all.

Rhumba Amalia heightens the Exotica sense, rhumba mixed with the shimmy-shimmy-shakes and standard bellydance. At some points she rushes about at such speed that it becomes unintentionally comical, talented though she obviously is.

Amalia Aguilar [Wikipedia]
Posted by Mercury at 6:00 AM

Joe Bonica's Movie Newsreels operated well into the 1960's. His biggest selling film was probably his reprint of U.S. government footage of the first atom bomb test. Copies of that item are still fairly easy to find.

In the 50's, Bonica faced a legal skirmish over allegations of selling pornography by mail; he won by allowing the judge to examine his "girlie" reels. The court ruled that Bonica's models did not show any more skin than could typically be seen on a public beach.

He had few qualms about "pirating" others' films; Bonica's line of musical shorts included bootleg dupes of Gene Autry numbers from Hollywood Film Enterprises reels, and others from Castle and Official Films musical subjects.