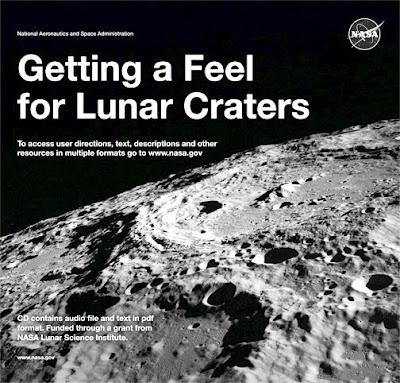 "NASA Unveils a New Lunar Book for the Visually Impaired"

NASA
NASA has unveiled a new book for blind and visually impaired readers at a media event and reception hosted by the NASA Lunar Science Institute (NLSI) at 6 p.m. PDT on July 18 at NASA’s Ames Research Center, Moffett Field, Calif.

The book “Getting a Feel for Lunar Craters” was created with the NLSI and features tactile diagrams of the lunar surface designed to educate the blind and visually impaired about the wonders of Earth’s moon. David Hurd, a space science professor at Edinboro University of Pennsylvania, Edinboro, Pa., is the book’s author. He and tactile engineer John Matelock began creating tactile astronomy tools after a student with a visual impairment signed up for Hurd’s introductory astronomy course. Cassandra Runyon, a professor at College of Charleston, Charleston, S.C. and Hurd previously produced “A Tactile Guide to the Solar System with Digital Talking Book” for NASA.

Note: the first publication has run out; a second reprinting of the book is expected in 2 months.
You can also download the Text Only Version or Audio File.

Hurd and students from the California School for the Blind, Fremont, Calif., are scheduled to attend the unveiling.

“NASA’s Lunar Science Institute is committed to the development of resources to bring lunar science into the world of those who cannot see. ‘Getting a Feel for Lunar Craters’ is one giant step for humankind, making lunar science visible through touch and sound,” said Yvonne Pendleton, director of the NLSI.
Posted by Mercury at 7:09 AM