Geology and the Civil War 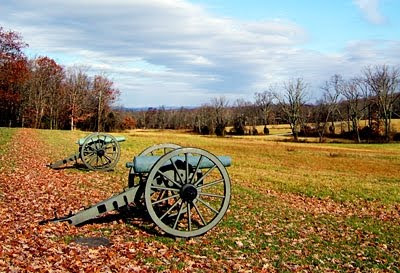 ScienceDaily
The connection between geology and the history of the Civil War has fascinated Robert Whisonant since his undergraduate days, and now Whisonant has teamed up with geomorphologist Judy Ehlen, both of Radford University, to take history, military history in particular, a step deeper -- into the geology beneath the soldiers' feet.

Whisonant and Ehlen examined the geomorphology of several battlefields and compared the terrain to known casualties for each day of fighting. The question, says Whisonant, is whether a correlation exists between the geology of the battlefield and casualties taken there. For some battles in the Civil War, the story told by the shape of the land is clear: soldiers were at greater risk in some areas because the underlying geology created a more dangerous terrain.

"Gettysburg is a good example where the Union had the high ground, but one disadvantage was the hard rock that forms that high ground is so close to the surface that the soldiers couldn’t dig trenches." They were open targets for artillery assault by the Confederates. But the disadvantage didn’t just go one way: "Those Confederate soldiers had to go up an open slope formed on more erodible rock with nothing to get behind when they finally had to attack." That's what Whisonant and Ehlen mean by their presentation title, "No Place to Run, No Place to Hide."

Whisonant and Ehlen also studied the terrain at Antietam, the site of the bloodiest battle in the Civil War, where on 17 September 1862 up to 23,100 soldiers were killed, wounded, or declared missing. "What’s so striking at Antietam," says Whisonant, is that "two geologic units underlie [that area]. One is a very, very pure limestone that as it erodes it literally melts. Mostly what you get with that is a very even, level, open surface -- there just aren’t a lot of deep holes and high hills that give soldiers a place to hide." On one area of this flat surface, known as Miller's Cornfield, "armies just shot each other to pieces until absolute exhaustion set in."

Nearby, however, a different formation lies beneath the terrain, made up of limestone and dolomite with some shale. "It makes for a very different kind of topography -- dissected topography" that provides good cover and concealment, and according to this study, "the casualties are much lower on that part of the battlefield."

When asked why this topic creates such a draw for people, Whisonant says, "I just think there's an innate interest in the wars that we've been involved in -- especially the Civil War -- that's just a part of our national 'who we are.' I think we've got a built in audience. … Using geology to connect to something people understand is really gratifying -- I love to talk to my students about the planet they live on and make connections to something they would know something about".
Posted by Mercury at 7:31 PM