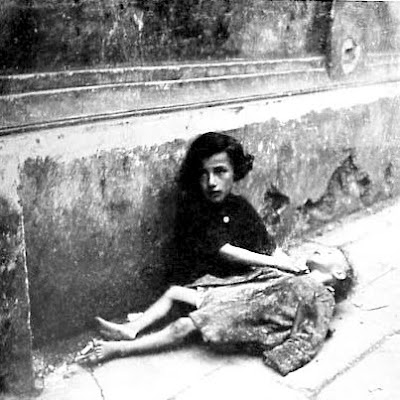 Signs and symptoms
Individuals experiencing starvation lose substantial fat (adipose) and muscle mass as the body breaks down these tissues for energy. Catabolysis is the process of a body breaking down its own muscles and other tissues in order to keep vital systems such as the nervous system and heart muscle (myocardium) functioning. Vitamin deficiency is a common result of starvation, often leading to anemia, beriberi, pellagra, and scurvy. These diseases collectively can also cause diarrhea, skin rashes, edema, and heart failure. Individuals are often irritable and lethargic as a result.

Early symptoms include impulsivity, irritability, hyperactivity and possibly submissiveness.[7] Atrophy (wasting away) of the stomach weakens the perception of hunger, since the perception is controlled by the percentage of the stomach that is empty. Victims of starvation are often too weak to sense thirst, and therefore become dehydrated.

All movements become painful due to muscle atrophy and dry, cracked skin that is caused by severe dehydration. With a weakened body, diseases are commonplace. Fungi, for example, often grow under the esophagus, making swallowing unbearably painful.

The energy deficiency inherent in starvation causes fatigue and renders the victim more apathetic over time. As the starving person becomes too weak to move or even eat, their interaction with the surrounding world diminishes.

There is also an inability to fight diseases, and in females, irregular menstruation can occur.

It is not pleasant at all and yet thousands dies from starvation. It is the responsibility of the human community to ward away starvation and implement methodologies of subsistence.

A tragedy in sections of Somalia...

The UN has declared two areas of Somalia to be in famine and warns this could spread through the rest of the country. But what happens now?

guardian.co.uk
By officially declaring parts of Somalia to be in the grip of famine, the UN will be hoping to galvanise governments and the public into action to address the food crisis in east Africa. The UN estimates that 12 million in the region are now in need of emergency help and warns that thousands will die unless aid arrives quickly.

Where is the famine?

The UN declared on Wednesday that famine now exists in two regions of southern Somalia: southern Bakool and Lower Shabelle. Across the country, nearly half of the Somali population – 3.7 million people – are now facing severe food shortages, of whom an estimated 2.8 million people are in the south. The Food Security and Nutrition Analysis Unit (FSNAU), funded by the UN's Food and Agriculture Organisation (FAO), warns that in the next one or two months famine will become widespread throughout southern Somalia unless help arrives. It says the crisis represents the most serious food insecurity situation in the world today and that the current humanitarian response is inadequate. Although Somalia is the worst-affected country, the crisis affects a much wider region, including the northern part of Kenya and southern parts of Ethiopia, Djibouti, the northern Karamoja region of Uganda, and parts of South and North Sudan, where large areas are classified as being in a state of humanitarian emergency.

How will aid agencies get into Somalia?

The situation in Somalia is complicated by the fact that the country has experienced conflict for decades. Al-Shabaab, the militant group that has aligned itself with al-Qaida, controls pockets of the capital, Mogadishu, and parts of central and southern Somalia. UN humanitarian agencies have welcomed the recent statement by al-Shabaab requesting international aid in southern Somalia, but pointedly said the inability of food agencies to work in the region since early 2010 has prevented the UN from reaching the very hungry – especially children – and has contributed to the current crisis. Unicef, the UN children's agency, has flown food supplies into Baidoa in south-central Somalia for the first time in two years. Supplies are now being flown into Mogadishu and a ship has left Kenya. The other prong of the aid effort is directed to those who have fled the drought to refugee camps, including Dadaab in Kenya, on the border with Somalia. With more than 380,000 people, it is the world's largest refugee settlement.

How is the aid effort being co-ordinated?

The UN operates a cluster system with different agencies taking the lead in different areas. So, for example, Unicef, operating with approximately 100 different partners, is in charge of nutrition aimed at children. It is bringing therapeutic food supplies, such as fortified milk for young children that has to be administered at health centres and sachets of peanut paste that can be taken independently. Unicef is also supplying clean water. Aid agencies need food supplies for 3 million people over the next six months, but funding is woefully short. David Bull, executive director of Unicef UK, says the agency is a "long way away" from the $30m it needs for the next three months. The FAO is appealing for $70m for Somalia for cash-for-work activities, provision of farm inputs and livestock emergency health services. It is also calling for $50m for Ethiopia, Kenya, Djibouti and Uganda. Oxfam has accused some rich governments of wilful neglect. It says, of the estimated $1bn needed to stave off a major humanitarian catastrophe, only about $200m in new money has so far been provided.

Donations from the public, co-ordinated through the Disasters and Emergency Committee (DEC) appeals, enable aid agencies to signifciantly scale up their response. Several of DEC's 14 member agencies, including Concern, Merlin, Islamic Relief and the Red Cross were already working on the ground in Somalia. Others work through established local partnerships. Confirmation from DEC of funding pledges from the public enables the member organisations to reach more people, and offer more resources and expertise in monitoring and evaluation.

Why has famine struck Somalia?

The FAO says it is due to a combination of conflict and insecurity, limited access for humanitarian organisations, successive harvest failures because of drought and a lack of food assistance. The country has suffered war on and off since 1991, which has destroyed much of its infrastructure. In some areas, people's ability to cope with drought has also been undermined by land policies that restrict access to grazing areas. The FAO says food shortages in Somalia have killed tens of thousands of people in recent months and this figure will increase unless urgent action is taken. Famine is classified using a tool called the integrated food security phase classification, which has three main criteria: severe lack of food access for large populations, acute malnutrition rates exceeding 30% of the population, and a death rate exceeding two people per 10,000 per day.

Is international action in the offing?

An international emergency meeting will be held in Rome on Monday to mobilise international support. The French government, holding the G20 presidency, has asked the FAO to organise the high-level ministerial meeting, to which the FAO's 191 member countries, UN agencies, international organisations, development banks and NGOs have been invited. Ironically, France has so far not pledged any new money, and Denmark and Italy have said no significant new sums are available. The FAO says there is a "tiny window of opportunity to prevent massive deaths and destitution".
Posted by Mercury at 10:34 AM