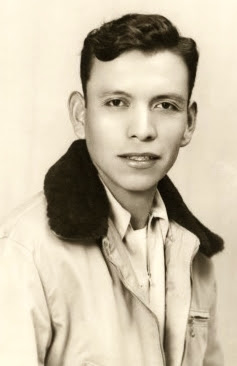 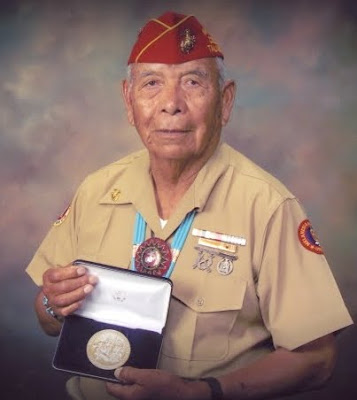 The Marine was among about 400 Navajos whose use of their native language in transmitting messages successfully thwarted Japanese code breakers in the Pacific.

Los Angeles Times
"My weapon was my language," World War II Marine veteran Joe Morris Sr. told a crowd of nearly 200 in a San Bernardino park on Veterans Day in 2004. "We saved a lot of lives."

Morris, one of the Navajo code talkers whose use of their native language in transmitting messages successfully thwarted Japanese code breakers in the Pacific during World War II, died Sunday at the Jerry L. Pettis Memorial VA Medical Center in Loma Linda of complications of a stroke, said his daughter, Colleen Anderson. He was 85.

Born on the Navajo reservation in Indian Wells, Ariz., Morris was one of approximately 400 Navajo code talkers who underwent extensive training at a communications school at Camp Pendleton to memorize the undecipherable code based on their complex, unwritten language.

The code grew to more than 600 Navajo terms by the end of the war. A submarine, for example, became "besh-lo," which means "iron fish" in Navajo. A bomber was "jay-sho," or buzzard in Navajo.

Words also could be spelled out using Navajo terms representing individual letters of the alphabet.

"We had to learn all of the codes, everything about airplanes, everything about ships," Morris told the St. Petersburg [Fla.] Times in 1999. "We would get released from school and study until midnight. Our instructors were all Navajos. They told us to get with it and not fool around. [They said] when you go overseas, you're going to need it."

In a 2003 interview with the Navajo Times, Morris said they were told "if you get captured by the Japanese don't you ever tell them what you learned here."

If captured, Morris said, their instructions were simple: "Just die for your country."

During combat on Okinawa, Morris told the Veterans Day crowd in 2004, the Japanese interrupted the transmission of messages among code talkers.

"The Japanese got into our frequency to destroy our message. We finished one word at a time until we finished the message," said Morris, who served with the 22nd Marine Regiment, 6th Marine Division.

The Navajo code talkers participated in every Marine assault conducted in the Pacific from 1942 to 1945.

For many years, a veil of secrecy surrounded use of the unbreakable Navajo code.

Morris told the St. Petersburg Times in 2001 that when each code talker was discharged, his commander admonished him not to speak of the work he did during the war.

That changed after the role the code talkers played in the war was declassified in 1968, but official recognition came years later.

In 1992, Morris was present when the code talkers were honored at the dedication of a code talker exhibit at the Pentagon.

In 2001, he attended the ceremony in Washington when President Bush awarded Congressional Gold Medals to four of the original 29 code talkers.

"I feel really blessed for what we did in World War II," Morris told the Tulare Advance-Register in 2007.

According to his daughter, Colleen Anderson, he became ill last November and within a week after Thanksgiving suffered a stroke. He was then admitted to the VA hospital where he was recovering until about three weeks ago when he fell and broke his hip.

“We don’t know the official cause of death yet,” she said, “but I’m a nurse and usually once elderly people break their hip they decline fast. His doctors didn’t want to perform surgery because it was too risky after he had the stroke. They were hoping his hip would heal on its own, but I don’t think that was the case.”

Born April 19, 1926 on the Navajo Nation Reservation at Indian Wells, Arizona, he spent most of his adult life in Daggett, California where he moved after marrying his wife, Charlotte. Taking a civilian job at the local military base in Barstow, California he raised his daughter and two sons without ever giving up his secret. It wasn’t until 1968, when President Ronald Regan declassified the information that he was able to tell his wife and family about the time he spent in the military as a code talker.

As the oldest of his siblings, Morris was responsible for tending the family’s horses and sheep. According to Anderson, his great grandfather on his mother’s side would come around early in the mornings and wake Morris up. Telling him to go run three or four miles every morning and get the horses taken care of so he could herd the sheep, Anderson said he used to laugh and say his great grandfather was almost like a drill sergeant. His great grandfather would also tell Morris to wash himself in the snow, that it would make him strong.

When Morris was 17 he decided he wanted to look for work other than tending the family’s sheep, so when he received his draft registration card he put down that he was 18 in order to get a job. Shortly after finding work at an ore mine for 50 cents an hour, he received a draft letter in 1944 requiring his service in the U.S. Marine Corps. Before Morris, still only 17, left to join the service, his father asked a medicine man to pray and sing for him so he would remain safe.

Passing his physical and written tests in Phoenix, he completed basic training at the San Diego Marine Recruit Depot and was then assigned to the Navajo Communications School at Camp Pendleton.

After spending five months training at Camp Pendleton learning the Navajo code and terms for military hardware, battlefield sites and key officials, he spent two years in the Pacific with the 6th Marine Division 22nd Regiment as a code talker making stops in Guam, the Guadalcanal, Saipan, Okinawa and Tinstao, China until he was discharged as a corporal in 1946.

Born a Diné/Navajo, life on the reservation was harsh. With no electricity or running water in the family’s hogan, Morris and his three brothers and sister slept on a dirt floor with sheepskins for warmth and comfort. At the age of 12 he received his only formal education when he attended a residential school 70 miles from the reservation. Two years later his education came to an abrupt end when the school was converted into an internment camp after the Japanese bombed Pearl Harbor.

Later in his life, after the release of the movie Windtalkers in 2002, in which two U.S. Marines in WWII are assigned to protect Navajo code talkers, Morris was often called to make speaking engagements at elementary and high schools, colleges, museums and social and military organizations. Anderson said her father was happy to talk to people about the work the code talkers did and tell their story. He was concerned that not enough people realized the role they had played in the war and with no account of it in school history books, he looked forward to sharing his story.

At one of these speaking engagements, Anderson said she was standing beside her father on stage because he was having difficulty hearing, when a man in the audience stood up and asked her what she was going to do as his daughter to carry on his legacy. Having never thought about it before, she went home and spoke to her brothers about hiring someone to film a documentary about their father. They took Morris back to the reservation where he had spent his childhood for the documentary’s filming, which was done by one of the crew that worked on Windtalkers.

Of the original 29 code talkers, Anderson said she believes there is one left. And of her father’s group of about 400 code talkers, she said there might be about 10 still alive today.

The Navajo code talkers were credited as being an integral part in winning WWII, and nearly 60 years later Morris received the Silver Congressional Medal during a 2008 ceremony in Window Rock Arizona. He was also invited to the Pentagon in 2009, along with three other code talkers, at the request of Gen. Peter Pace.

Morris’ awards include combat ribbons for the Pacific Theater and China occupation medals. He also held a rifle expert medal, certificates of appreciation from the president and the California Senate, and a Marine Corps coin, a special honor that only one Marine can bestow on another.

The colonel at Yermo Annex in Barstow where Morris worked as a civilian presented Morris with a certificate of appreciation after finding out in 1968 that he had been discharged from the Marines as a code talker.

Morris leaves behind his wife of over 60 years, Charlotte, three children, Joseph Morris Jr., Colleen Anderson and Elliott Morris, along with three grandchildren, Christopher, Stephanie and Nolen. His parents were Charley and Alice Morris.

Anderson said Morris’ children would like him to be remembered as a humble man, a quiet person and a good family man who provided his children with a wonderful childhood. She said their close relationship with their father continued into their adult lives.