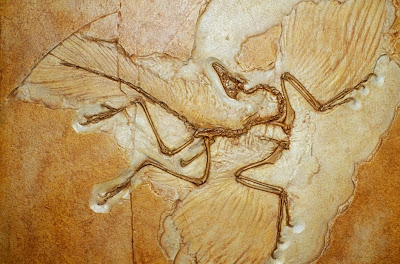 Archaeopteryx created a sensation in Victorian England with its bird-like wings but teeth and tail of a dinosaur.
Birds of a feather with conflicting conclusions.

The fossil Archaeopteryx may not have been one of the earliest birds but just another feathered dinosaur, claim scientists

guardian.co.uk
The archaeopteryx, supposedly the oldest and most primitive bird on Earth, might not have been a bird after all, scientists say.

The controversial claim, if confirmed, is something of a bombshell for researchers, who have viewed the evolution of birds and feathered flight through the lens of the species since it was discovered 150 years ago.

The finding leaves palaeontologists in the awkward position of having to identify another creature as the oldest and original avian on which to base the story of birdlife.

Archaeopteryx was discovered in 1861, two years after Charles Darwin published On the Origin of Species. The spectacular fossils of an animal with the feathered wings of a bird, but the teeth and tail of a dinosaur, caused an immediate sensation in Victorian England where society was wrestling with the consequences of evolution through natural selection.

Though descriptions of archaeopteryx as a "missing link" are widely frowned upon by scientists, the creature became renowned as the most primitive bird on the planet.

That view has now been challenged by researchers in China, who have tried to knock the feathered fossil off its perch in a reassessment of the bird-dinosaur family tree.

Xing Xu at Linyi University and colleagues ran the fresh analysis after studying a new archaeopteryx-like fossil bought from a dealer by the Shandong Tianyu Museum of Nature, the world's largest dinosaur museum. The fossil was probably excavated from the 155 million-year-old Tiaojishan Formation in eastern China. The chicken-sized creature, named Xiaotingia zhengi in honour of the scientist who established the museum as a repository for vertebrate fossils, shared several features with archaeopteryx, including long, sturdy forelimbs that presumably allowed it to fly.

But when Xu's team reconstructed family trees to include Xiaotingia, they found the creature belonged not in the lineage of birds, but to a group of dinosaurs called deinonychosaurs. More strikingly, archaeopteryx appeared in the same group, according to the study in Nature. Deinonychosaurs, such as the velociraptor, walked on two legs, ate meat and had vicious retractable claws. The finding is tentative, but builds on doubts that have emerged over the special status of archaeopteryx following the discovery of other bird-like dinosaurs and dinosaur-like birds over the past decade or so.

In an accompanying article, Lawrence Witmer at Ohio University wrote: "There has been growing unease about the avian status of archaeopteryx as, one by one, its 'avian' attributes (feathers, wishbone, three-fingered hand) started showing up in non-avian dinosaurs. Perhaps the time has come to finally accept that archaeopteryx was just another small, feathered, bird-like theropod fluttering around in the Jurassic."

If archaeopteryx was a dinosaur, this means flight evolved at least four times in vertebrates: in reptiles, birds, dinosaurs, and most recently in bats.

Witmer adds that with archaeopteryx dethroned, more recently discovered fossils, including epidexipteryx, jeholornis and sapeornis, become candidates for the world's oldest bird. On a cautionary note, he adds that the next feathered fossil unearthed in China could easily restore the premier status of archaeopteryx.

Paul Barrett, a dinosaur researcher at the Natural History Museum in London, said: "The overall picture of birds being descended from meat-eating dinosaurs is now very firmly established. This is an argument over a relatively small rearrangement of some of the twigs on the evolutionary tree close to the origin of birds. It doesn't affect much of our big picture view of how birds came from dinosaurs, but some of the minutiae: the small changes that are important to the biology of the animals.

"This part of the evolutionary tree is very sensitive to small changes in how we interpret the anatomy and the combination of anatomical features we see in these animals as they are discovered. As a result, the structure of that evolutionary tree is very unstable and can flip around. Maybe archaeopteryx wasn't on the direct ancestral line to birds, but was part of an early experimentation in how to build a bird-like body."

Archaeopteryx: An Early Bird
Posted by Mercury at 2:03 PM