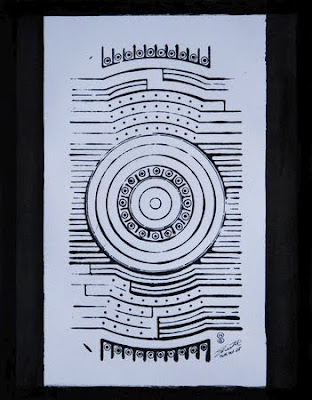 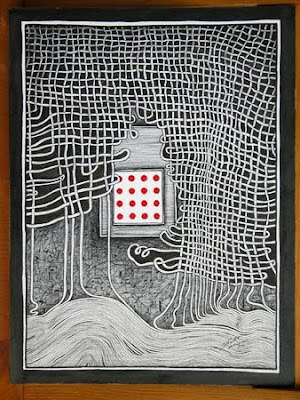 "Day-dreaming gives dimensions to her creativity"

The New Indian Express
Having drawn inspiration from the mystery that is being surrounded, Shanthi Chandrasekar’s works reveal an exclusive blend of Indian heritage and inner deliberations

“As far as abstracts are concerned, colours relatively come into contact which forms different line shapes and patterns,” says Shanthi Chandrasekar, a self-learned artist who holds her first art show in India. She’s put up in Maryland and comes to India for artistic exposures.

Shanthi’s 35 art pieces and sculptures are an outcome of her visual adventures where the tenets of physics intersect with spirituality. Her art represents an effort to figure out abstract concepts without any hitches. Lured towards spirituality and meditative experiences, Shanthi associates every aspect of physics and psychology with that of her art pieces to explain intricate artistic techniques. The artist’s ongoing search for the meaning in her spiritual discoveries is from microcosm to macrocosm.

Shanthi is interested in movements of lines and illusions. She says those imaginary lines have links and react to her senses. “I’m totally lost when I paint. Day-dreaming has brought numerous dimensions to my creativity,” she grins. Quiz the reason for her involvement in physics? The artist spent her early days in Kalpakkam near the Atomic Energy circle. “All are made of atoms; physics and human lives are inseparable,” she tells.

Having obtained her degrees — BSc Physics in WCC and MA Psychology in Annamalai University, she explains that the latter has helped her immensely in observing art viewers’ mentality. Shanthi is in all glee as she expects her college faculty to visit her abstracts. “I play with the mathematical aspects of various shades and that denotes nothing can be taken for granted,” she substantiates.

On talking about the viewers’ perceptions, she says when a person finds a blotch in her work; it shows his/her negative approach towards life.? “When you can’t understand the paintings at your closer stretch, move backward and see it from a distance. So as your life problems; when you go away from it, those seems insignificant,” she says.

Communicating a positive approach is all she does through her art pieces. “I didn’t want to title my works as I love people perceiving concepts in their own ways,” she smiles.

She has used pen and ink drawings with acrylic on canvas. The illusions of simplicity and complexity are the concepts behind her ‘Maya’. The other concept implies Shakti, which means power.? She has interpreted the inner courage as a glory of power for women. Giving importance to one’s levels of determination, her abstracts convey a deep sense of dignity.

Also Shanthi has carved the wooden blocks into distinctive personalities with its own set of qualities and weaknesses. Despite the characters’ weaknesses, an identity has been established that makes one proud which unites them for a cause. ‘Yathra’ expresses journeying. While many are unintentional about their paths, it tells one on distinguishing the right from wrong ones. Her Chakra series emit energy — the black holes of mind and elucidates one’s state of mind where no thoughts can enter or exit without the third eye (source? of knowledge). The artist’s red dots convey her purposeful memories on a white background.

The artist beams that her US house is flooded with paintings and sculptures. Interestingly, she is reluctant to sell some of her paintings. Reason is that she would gift those to her parents. Also, Shanthi works from her studio at Pyramid Atlantic Art Center, Silver Spring and conducts classes at Arts & Humanities Council of Montgomery County, Washington DC suburb.