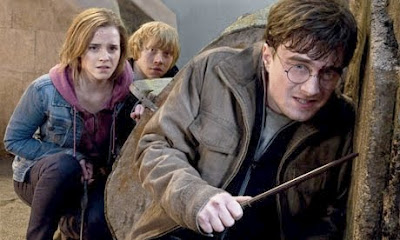 "An ode to Harry Potter: His magic transformed my life"

USA TODAY
I often prayed that my own green-inked invitation to attend Hogwarts was merely delayed a year … or several. Yet despite that letter's tardiness, we Muggles have had to make do. Middle school was when I discovered the first four Harry Potter books. Like Harry's life at age 12 and 13, it was an easy time, when friendships were deepening and life was fresh and exciting.

But then I entered high school. Suddenly I felt isolated. My friends and I began to grow apart. You see, my world was changing: My mom was suffering from depression, I was gaining my own acquaintance with it, my friends were relentlessly making fun of another friend, and I didn't know how to fight any of it.

In addition to its own editorials, USA TODAY publishes a variety of opinions from outside writers. On political and policy matters, we publish opinions from across the political spectrum.

Roughly half of our columns come from our Board of Contributors, a group whose interests range from education to religion to sports to the economy. Their charge is to chronicle American culture by telling the stories, large and small, that collectively make us what we are.

We also publish weekly columns by Al Neuharth, USA TODAY's founder, and DeWayne Wickham, who writes primarily on matters of race but on other subjects as well. That leaves plenty of room for other views from across the nation by well-known and lesser-known names alike.

This was also the year Sept. 11 occurred and the year I began to understand the weight of the fact that my mother had survived cancer twice. I was growing up and learning that, all around us, evil lies in hiding. Inevitably, evil will rise to power, as Voldemort did in Goblet of Fire. The question is whether we'll survive it, let alone defeat it.

In the face of evil, Harry had Hermione and Ron. I envied him such loyal best friends. I didn't have anything quite like that. I began to spend more time with my sister and cousin, both two years older than me. However, they didn't like having me around much. I was the youngest in our extended family and an annoying third wheel to the long-standing best friends status my sister and cousin had.

In November, the first film adaptation came out, Harry Potter and the Sorcerer's Stone. My sister, my cousin, our parents and I watched the film on its opening day. Though I hardly expected it, something magical happened in that theater. The movie transformed my sister, my cousin and me. Not because we each fell in love with the movie. We did, of course, but the effect was even stronger than that. The movie would bond us forever.

The next Monday was Celebrity Day at school. My sister, cousin and I dressed as the Harry Potter trio. I was Ron, because of the red hair, of course. My sister was Hermione, because she wanted to be the female. To my cousin fell the crucial task of being Harry, because she hadn't read the books yet and we didn't want her to lose interest.

We could hardly stop at Celebrity Day, though. That summer, as the three of us confided our fears and insecurities to one another and grew closer, we also busied ourselves with the task of magic-making. We fashioned our own wands out of dowel rods, cabinet knobs and wood polish; we sewed cloaks and hats from black cloth; and we hammered the yellow lenses out of a pair of black-rimmed glasses. We were preparing for the second movie.

On the day of the release, we made a grand entrance into the theater and delivered "magic" (red and gold glitter) to onlookers. We didn't fool anyone into thinking we were wizards. But our actions were like the most powerful wizarding spells. You must put real belief and work behind such spells to make them work. It was just like friendship, really. That day, as children marveled at our "magic," I realized I had found the best friends I ever could.

The next year, my sister and cousin graduated. Again, everything changed. We could never be close in the same way we had been. We went to separate colleges, and though my sister and I live only a state away now, my cousin lives 800 miles away. That's how life works. Friendships transform, books end, the last movie reaches the closing credits. Yet the three of us still attend every book release, movie release and Harry Potter event we can together. There is still no one I would rather tell my greatest fears and insecurities.

And, in fact, I do believe Harry Potter is real. Not because I think Diagon Alley thrives beneath the London Underground. Harry Potter is real because his world lives on in us — in the experiences we've had as fans and in the ways the books and movies have shown us how to live.

BBC NEWS
The final Harry Potter movie has shattered box office records in the US and Canada, taking $168m (£104m) over its opening weekend.

Harry Potter and the Deathly Hallows: Part 2 had already made $92.1m (£57m) on its opening day, said the film's distributor, Warner Bros.

The previous opening weekend record was held by Batman film The Dark Knight, which took $158m.

The Potter film is the eighth movie in the hugely popular franchise.

Fans around the world queued for hours to be among the first to see the film, which was based on the second part of JK Rowling's seventh and final book in the series.

Most cinemas were showing the film in 3D, which slightly increased the ticket price.

The entire Potter film series has so far earned more than £4bn worldwide, not including the final film's takings so far. Internationally, the film had taken $157.5m by Friday.

It has been 10 years since the first movie in the series, Harry Potter and the Philosopher's Stone, was released.

It made stars of its young cast, Daniel Radcliffe, Emma Watson and Rupert Grint.

The previous box office record for a single day belonged to The Twilight Saga: New Moon, which made $72.7m (£45m) on its opening.

Earnings from the final Harry Potter film are set to pass £1bn. Meanwhile Woody Allen is surpassing himself, literally

guardian.co.uk
According to a recent report in the movie blog Deadline Hollywood, the Harry Potter franchise has earned Warner Bros in the region of $21bn ($6.4bn from movie ticket sales and $7bn from merchandise, among other streams such as TV and home entertainment). They can add on at least another $1bn if the extraordinary opening weekend of Deathly Hallows: Part 2 will be anything to go by. The series finale grossed approximately $476m worldwide over its first weekend. This will become the first Potter movie to cross $1bn in ticket sales.

Harry Potter and the Deathly Hallows: Part 2 set a North American opening-weekend record of $168.8m over three days, overhauling the three-year mark of $158.4m set by The Dark Knight – another Warner Bros release. Around $43.5m of that comes from midnight previews last Thursday/Friday; it all goes into the pot. The astonishing $307m international debut smashed the short-lived $260.4m record set by Pirates of the Caribbean 4 in late May and included a record UK debut of £23m ($36.6m) from about 4m admissions.

This is all mind-boggling stuff. In a way, I bet Warner Bros top brass are annoyed they only split the finale into two parts. Perhaps they've already set their minions to work on concocting a Rashomon-like sequence of follow-ups. Soon we'll be subjected to Harry Potter and the Deathly Hallows: Mrs Weasley's Story, in which Mum of Ron reveals her larger-than-initially-thought role in Voldemort's downfall. Then there might be the hitherto unknown account of Bellatrix Lestrange: a heroic spy within Voldemort's ranks, perhaps, whose covert allegiance to Harry was cruelly overlooked. Etc.

It seems remarkable that a Potter episode hasn't already generated more than $1bn in ticket sales. The much-loved franchise has inspired repeat visits from its acolytes and, as we know, repeat viewings is what turns a big hit into a phenomenon such as Titanic, Avatar, The Lord of the Rings: The Return of the King and, more recently, Pirates of the Caribbean 4. Like all cultural phenomena, Harry Potter is more than its movies. Witness scenes of near hysteria last weekend when a select band of fans was granted access to the Florida theme park for two-hours. See how Emma Watson – not to mention dozens of giddy fans – wept at the London premiere.

Warner Bros chiefs know there's going to be no replacing this franchise. Unless JK Rowling can be coaxed into penning a sequel about Harry's children, the hunt for that magical new property is well and truly on. My bet is that the next big thing will be The Hunger Games. Lionsgate has movie rights to Suzanne Collins's excellent young adult series and has been adapting the first book in time for next March. But even if they nail it, the series only runs to three books. So that makes four movies if the studio splits the finale into two, de rigueur these days if you look at Harry Potter and Twilight.

The debut eclipses The Dark Knight, which opened to $158 million in 2008 and went on to collect $533 million, the third highest-grossing film on record. Analysts say that record could be in jeopardy, though Titanic's $601 million and Avatar's $761 million record grosses benefited from slow winter competition and may be out of reach.

Still, no one is doubting Potter's power.

"It's truly hard to guess where this will end up," says Tim Briody of boxofficeprophets.com. "This is truly the biggest film event in many, many years."

Hallows was a record-breaker out of the gate. By Friday, the movie had done $92.1 million, shattering the previous mark of $72.7 million set in 2009 by The Twilight Saga: New Moon.

According to Box Office Mojo, one out of every four movie tickets sold this weekend was to Potter. Final estimates are due Monday.

The film marks a fitting farewell to a series that has become the highest-grossing franchise of all time. The movies have done $2.1 billion in North America alone and average $263 million.

Critics have been as supportive as fans. Hallows earned a thumbs-up from 97% of the nation's critics, according to survey site rottentomatoes.com, the highest for an entry in the series. Another 93% of fans gave the movie a thumbs-up, according to the site.

Glowing critical and fan reaction "will bring out almost anyone who had even a casual interest in the books and movies," Briody says.

That didn't leave much room for other films. Transformers: Dark of the Moon fell 55% from its debut to take second place and $21.3 million. The film, which has done $302.8 million, becomes the first to surpass $300 million this year.

The comedy Horrible Bosses was third with $17.6 million, followed by the Kevin James comedy Zookeeper with $12.3 million. Cars 2 rounded out the top 5 with $8.3 million, lifting its total to $165.3 million.

The only other newcomer, the Disney cartoon Winnie the Pooh, was sixth with $8 million, about $2 million below projections.

Hallows' colossal opening pushed summer ticket sales ahead of 2010's by 1% for the year, however, the year remains 7% behind 2010 in revenues, 9% in attendance.
Posted by Mercury at 10:34 AM