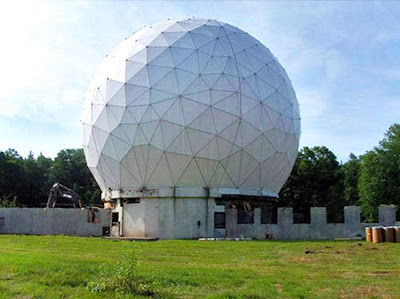 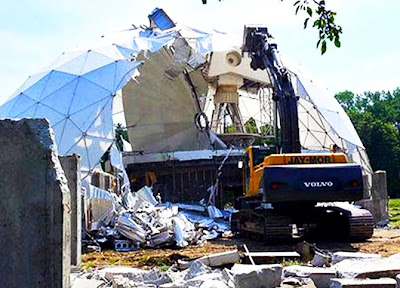 TELEGRAM & GAZETTE
When ET phoned home, he might have checked with the staff at the Five College Radio Astronomy Observatory on Prescott Peninsula to see if help was on the way.

Off limits to the general public, the 12,300 acres of Prescott Peninsula divide virtually the entire length of Quabbin Reservoir and because of its special status has always generated its share of speculation and tall tales.

The vast majority of research on Prescott Peninsula focused on watershed forest management, wildlife and related topics, such as the toll an overabundant white-tailed deer population was taking on forest regeneration.

The radio astronomy site on Prescott, established in 1969, was something of an anomaly, as researchers here were looking light years beyond the Quabbin Reservation.

William E. Pula, regional director of the Quabbin and Ware River watersheds for the state Department of Conservation and Recreation said yesterday the original 1969 contract with the Five College Radio Astronomy consortium — the University of Massachusetts at Amherst, Amherst College, Smith College, Hampshire College and Mount Holyoke College — called for the removal of all equipment and infrastructure if the site was ever decommissioned.

“Now that they're transitioning to a new site in Mexico with a larger telescope, the site has been demolished, and graded, with plans for two markers and the planting of sugar maples, oaks, and other trees this fall,” Mr. Pula said.

Professor Mark C. Hemeon-Heyer, associate director of the Five College Radio Astronomy Observatory, said the site had been dormant since 2008 and from 2006 to that date had been used to test instruments that will be used at the new 50-meter radio astronomy telescope in Mexico, due to be fully operational a year from September.

Mr. Heyer said UMass. had been looking for a buyer to dismantle and remove the 14-meter telescope from Prescott, but when that didn't happen, the university lived up to its obligation to restore the site, despite serious fiscal constraints.

“They were true to their word. First the equipment was removed, and the building was checked for any hazardous materials like asbestos or lead paint. At that point that brought in an excavator and started pulling apart the dome,” Mr. Pula said.

“I was surprised just how tough the skin of the dome was. They took it apart piece by piece and it didn't collapse. They took a wrecking ball to the concrete base of the building, removed the demolition debris and graded the site,” Mr. Pula said.

He explained that along with the planting of mixed hardwoods, granite markers would be placed there, one similar to the marker on Dana Common, acknowledging the displaced village. "The other marker would recognize that the site had been used for four decades for astronomical research,” he said.

Mr. Pula said the white dome in the clearing was something of a landmark for aircraft and occasionally prompted speculation of just what kind of research was taking place at the facility in the middle of “the accidental wilderness” that is the 58,000-acre Quabbin Reservation.

In fact, detailed scientific data, reports of ongoing research and an explanation of the Five College Radio Astronomy Observatory project was as close as the website.

The website described the first telescope as a customized low frequency antenna to search for pulsars in the galaxy. The subsequent development of instrumentation within the labs contributed to the discovery of the binary pulsar system by Joe Taylor and Russel Hulse for which the two men received the 1993 Nobel Prize in physics.

Mr. Pula said Quabbin was originally looked at as a site for the observatory because of its distance from electromagnetic radio transmissions that could cause interference and corrupt the data that was being collected.

Mr. Heyer said in 1976 when the 14-meter domed radio telescope was built, it operated at much higher frequencies, and could have been located on the University of Massachusetts campus in Amherst, but because there was an established site on Prescott Peninsula it was built there.

“At the Quabbin site, back in the 1970s we were at the forefront of very early research into molecules in interstellar space. Space is not a vacuum, but is filled with gas and dust and in the coldest, densest phase of that gas, atoms combined to form molecules,” the professor said.

The Quabbin antenna was able to pick up radio emissions coming from molecules that come in very discreet frequencies, Mr. Heyer said, adding that through spectroscopy, astronomers were not just looking at the emissions coming from clouds of gas, but the velocity and internal motion of that cloud of gas.

“For the past 15 years the Five College group became known for making these wide field-imaging studies of the molecular component of the Milky Way galaxy and other galaxies as well. What came out of this research was an understanding of how turbulent and complex these regions are,” he said.

Mr. Heyer said the Prescott site drew astronomers from across the country and around the world, until the last five years of operation, where the vast majority of it was remote where astronomers could log in to the telescope via the Internet.

“When we stopped operations at Prescott and began the transition to the 50-meter telescope in Mexico, our Prescott telescope was still at the peak of its scientific usefulness, but because of budget cuts it made sense to phase out its operation, and focus all of our resources on the Mexico project.“

"That site has much better climate and atmospheric conditions with a telescope of much greater sensitivity,” the professor said

Based on successful funding and startup protocols, Mr. Heyer said, he hopes the Mexico site is fully operational a year from September.

At that point, it will be one of the premier astronomical sites in the world for looking at how galaxies formed, and how they evolved.

The Five College Radio Astronomy Observatory
The FCRAO was founded in 1969 by the University of Massachusetts, together with Amherst College, Hampshire College, Mount Holyoke College and Smith College. From its inception, the Observatory has emphasized pioneering research, the development of state- of-the-art technology and the training of students -- both graduate and undergraduate. The initial telescope of FCRAO was a customized low frequency antenna to search for pulsars in the Galaxy. The development of instrumentation within the FCRAO labs contributed to the discovery of the binary pulsar system PSR 1913+16 by Joe Taylor and Russel Hulse and for which they received the 1993 Nobel Prize in Physics.

The original low frequency telescope was superseded in 1976 by a 14-m diameter radome-enclosed antenna for use at high radio frequencies (mm wavelengths), built primarily to study the physics and chemistry of interstellar clouds, circumstellar envelopes, planetary atmospheres, and comets.

The history of scientific research at the FCRAO 14m telescope has paralleled the evolution of millimeter-wave astronomy. Initially, the science was in a period of discovery, triggered by the remarkable detection of CO in 1970 and the follow-up work which defined the nature of the molecular interstellar medium. Today, we focus our effort on the study of objects which are now familiar and attempt to learn their secrets. We found that stars are formed in molecular clouds, but today we seek to understand how this occurs. We discovered an incredible chemical complexity and diversity in these clouds, and today we seek to explain the origin of this chemistry and understand its implications. We learned that molecular clouds are an important phase of the interstellar medium in our own galaxy and in external ones, but today we seek a better understanding of the role that these clouds play in galactic evolution.

A key aspect of ``understanding'' the nature and role of objects that define the molecular interstellar medium is to place them in a temporal context. For example, the field of stellar astronomy significantly advanced when it was recognized that different types of stars are actually stars at different stages in their evolution. This knowledge did not come about by studying the brightest stars in the sky, or the stars with the most obvious spectral lines, or the stars that were the closest to the Earth. The knowledge resulted from the development of instrumentation that allowed broad surveys of the stars and enabled stars in all evolutionary states to be characterized. Evolutionary questions about the molecular ISM require a similar treatment. The research program at the FCRAO 14m telescope has emphasized the development of focal plane array instrumentation and observing programs that address these issues.

The operation of the 14m telescope with a strong scientific focus and a commitment to key survey projects allows unique scientific investigations and provides excellent research opportunities for students in astronomy and instrumentation. Thus, we believe that our focus on evolutionary questions is aligned with the traditional objective of FCRAO for excellence in three major areas: astronomical research, instrumentation and education of students. We believe that the commitment to excellence in all three areas is vital to the success of university-based observatories like our own and that the achievements of such facilities are crucial to the future of American science.

Funding for the Quabbin facility comes from the NSF and from the Commonwealth of Massachusetts.

While the 14 meter telescope is the current platform for research and instrumentation efforts, the future platform is the Large Millimeter Telescope/Gran Telescopio Milimetrico (LMT/GTM). The LMT/GTM is a joint project between the University of Massachusetts and the Instituto Nacional de Astrofisica, Optica y Electronica in Puebla, Mexico to construct and operate a 50 meter telescope between 1 and 3mm. This new facility will enable observational studies of protogalaxies, the cosmic background radiation, and detailed studies of the molecular interstellar medium and star formation in the Milky Way.