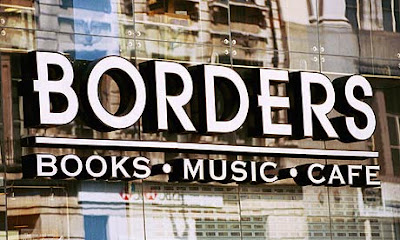 The Patriot Ledger
It looks like Chapter 11 will be the last chapter for Borders Group after all.

The struggling retailer failed in its last-ditch effort to find a white knight buyer that could top a bid in bankruptcy court by two liquidation firms. The closings of Borders’ remaining 399 stores – including 13 in Massachusetts – will take place by the end of September, a move that will lead to the loss of nearly 10,700 jobs.

Borders, the nation’s second largest bookstore chain, conceded its defeat today by announcing that it will seek bankruptcy court approval for the sale of the company’s assets to liquidators Hilco and Boston-based Gordon Brothers.

In the final hours, Borders executives hoped the liquidation firms’ bid, valued at nearly $300 million, would be a starting point for an auction that was scheduled to begin tomorrow. But Borders said this afternoon that it was canceling the auction because it hadn’t received any other bids to continue to operate the business.

“We were all working hard towards a different outcome,” Borders President Mike Edwards said in a prepared statement. “But the headwinds we have been facing for quite some time, including the rapidly changing book industry, e-reader revolution and turbulent economy, have brought us to where we are now.”

But that sale fell apart last week after creditors objected because the arrangement didn’t prevent Najafi from acquiring Borders and liquidating the company. If Borders was to be liquidated, the Hilco-Gordon Brothers bid was viewed as the more valuable offer.

Mike Tesler, partner at the Retail Concepts consultancy in Norwell, said Borders’ complacent management failed to adapt to broad industry trends in the past decade.

Tesler said Borders executives failed to reduce the size of Borders’ stores to reflect the rising popularity of online book sales. He said they also failed to reduce their focus on CD and greeting card sales quickly enough, or to develop a popular e-reader business like rival Barnes & Noble’s Nook.

“It’s a case study in poor management,” Tesler said of Borders. “Talk about handwriting on the wall – it was paint on their freaking windshield, and they just kept driving. It’s unfortunate, because the people who work at their stores are all going to be out of jobs.”
Posted by Mercury at 5:39 PM