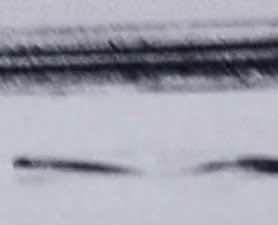 A still of "Cadborosaurus" from a video shot in 2009 looks like it was shot by an old Kodak 8mm movie camera. This is typical, isn't it, with mysterious" creatures? And the usual caveat..."...it was shot under rainy circumstances in a bouncy ship..." And so, it it will be a television special like Al Capone's vault and pyramid treasures--a flop. Beware of poor images and testimonials.

The alleged sea serpent has a long neck, a horse-like head, large eyes and back bumps that stick out of the water.

Discovery News
A video from 2009 shows something mysterious moving across the surface of the sea that resembles an Alaskan version of the Loch Ness monster.

Some are claiming that the animal is a "Cadborosaurus," a type of reptile or lizard that got its name from Cadboro Bay, in British Columbia. They say that what's in the video is a sea serpent that dwells in the North Pacific and possibly other regions.

Accounts generally describe it as having a long neck, a horse-like head, large eyes, and back bumps that stick out of the water.

The footage, shot by Alaskan fishermen in 2009, will make its public debut on "Hillstranded," a new Discovery Channel special that will air Tuesday evening at 10 p.m. E/P.

"I am quite impressed with the video," Paul LeBlond, former head of the Department of Earth and Ocean Sciences at the University of British Columbia, told Discovery News. "Although it was shot under rainy circumstances in a bouncy ship, it's very genuine."

LeBlond, co-author of the book "Cadborosaurus: Survivor from the Deep," said the animal is "the least unlike a plesiosaur," referring to carnivorous marine reptiles thought to have gone extinct at the end of the Cretaceous Period.

Sightings of "Cadborosaurus" have been reported for ages. In 1937, a supposed body of the animal was found in the stomach of a whale captured by the Naden Harbour whaling station in the Queen Charlotte Islands, a British Columbia archipelago. Samples of the animal were brought to the Provincial Museum in Victoria, where curator Francis Kermode concluded they belonged to a fetal baleen whale.

The animal's remains, however, later disappeared. James Wakelun, a worker at the whaling station, last year said that he had seen the creature's body and "it wasn't an unborn whale."

Still, some throw caution to the sighting.

"People are working off of sketchy lay observations," said Jim Covel, senior manager of guest experience at California's Monterey Bay Aquarium. "We do, however, still find new species in the oceans, perhaps allowing some to entertain ideas like this, filling in the gaps with their imaginations. But it really underscores how more scientific exploration is needed."

Like other cryptids -- animals who some think exist, but which have not yet been recognized by scientific consensus -- "Cadborosaurus" has existed only in grainy photographs and eyewitness accounts.

The 2009 video, therefore, "adds to its authentication," LeBlond said.

While many have speculated that "Cadborosaurus" is actually a frill shark, a large eel, or some kind of fish, LeBlond countered that it cannot be a fish due to the way it moves.

"It must be a mammal or a reptile, since it oscillates up and down in a vertical plain, which eliminates sideways-oscillating fish," he said.

A possible new believer in "Cadborosaurus" is Andy Hillstrand of "Deadliest Catch" television show fame. He told Discovery News that he might have seen another one of the enigmatic animals while filming "Hillstranded," a new Discovery Channel special debuting tonight that features the 2009 footage.

Hillstrand and his brother Johnathan traveled to sites in Alaska where Cadborosaurus has been spotted. Referring to one location, he said, "We saw a big, long white thing moving in the water. We chased it for about 20 minutes."

"Spray came out of its head," he continued. "It was definitely not a shark. A giant eel may be possible, but eels don't have humps that all move in unison. I've never seen anything like it before."

Hillstrand speculates that whales, following salmon, might be pushing the animals closer to shore and into the view of humans.

While he understands the controversy and skepticism over such sightings and claims, Hillstrand believes the many fishermen who have reported seeing the animal "are not a bunch of fruitcakes. These are people who are familiar with the local marine life."

In order for a cryptid to gain scientific credibility, more physical evidence must be obtained. LeBlond said, "We cannot go out in the ocean poking everywhere, but we are always on the lookout for new accounts."

Hillstrand, on the other hand, isn't ruling out another "Cadborosaurus"-related trip.

"We live in Alaska, so we might investigate 'Cadborosaurus' again in future," he said. "We are always up for an adventure." 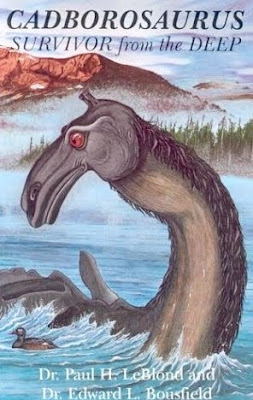 Cadborosaurus: Survivor from the Deep
by