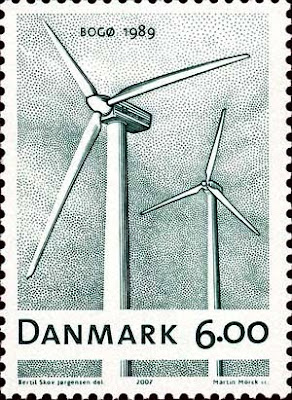 Thanks to POSP stringer Tim for this article...

"Rotten Wind in the State of Denmark"

The Journal of the American Enterprise Institute
Denmark is yet another country that has made wind power a hallmark of its energy policy. But are the lofty claims about Danish wind true? No.

In the final piece of a series on whether green energy leads to green jobs, I focus on Denmark.

Denmark is yet another country that has made wind power a hallmark of its energy policy. President Obama has praised the Danes for their aggressive wind power program, telling an Earth Day audience in Iowa: “Today, America produces less than 3 percent of our electricity through renewable sources like wind and solar—less than 3 percent. Now, in comparison, Denmark produces almost 20 percent of their electricity through wind power.” The U.S. Energy Information Administration tells America’s children that “Denmark ranks ninth in the world in wind power capacity, but generates about 20 percent of its electricity from wind.” That sounds impressive, but is it true?

Not according to Danish think tank CEPOS, which issued a 2009 report entitled “Wind Energy, the case of Denmark." CEPOS found that rather than generating 20 percent of its energy from wind,

The CEPOS study revealed that while Denmark can only produce and consume as much wind power as it does due to a convenient circumstance: neighboring countries have hydropower that can quickly and effectively balance the flow of electricity on their energy grid, allowing Denmark to export surplus wind capacity.

Denmark manages to keep the electricity systems balanced due to having the benefit of its particular neighbors and their electricity mix. Norway and Sweden provide Denmark, Germany, and Netherlands access to significant amounts of fast, short-term balancing reserve, via interconnectors. They effectively act as Denmark’s “electricity storage batteries”. Norwegian and Swedish hydropower can be rapidly turned up and down, and Norway’s lakes effectively “store” some portion of Danish wind power.
Over the last eight years West Denmark has exported (couldn’t use), on average, 57 percent of the wind power it generated and East Denmark an average of 45 percent. The correlation between high wind output and net outflows makes the case that there is a large component of wind energy in the outflow indisputable.

Finally, the CEPOS study found that Danish consumers are the ones who take it on the chin. Denmark’s electricity prices are the highest in the entire European Union. And the greenhouse gas reduction benefits? Slim to none, since the exported wind power replaces hydropower, which does not produce significant greenhouse gas emissions. The wind power consumed in Denmark does displace some fossil fuel emissions, but at some cost: $124 per ton, nearly six times the price on the European Trading System.

Not surprisingly, Denmark, like other early adopters of renewable power, is finding it unsustainable, and is backing away from the technology. As Andrew Gilligan reports in The Telegraph, the Danish state-owned power industry will no longer build onshore wind turbines, and consumers are complaining about high energy rates and environmental despoliation:

Earlier this year, a new national anti-wind body, Neighbours of Large Wind Turbines, was created. More than 40 civic groups have become members. "People are fed up with having their property devalued and sleep ruined by noise from large wind turbines," says the association's president, Boye Jensen Odsherred. "We receive constant calls from civic groups that want to join."
In previous weeks, we've explored the experience of several European countries that bought into the great green promise: that somehow, forcing green energy into the world's energy grids would not only lead to less expensive, more stable, and more locally grown energy, it would lead to new technologies that could be exported at a profit, all while creating more jobs than might be destroyed in the historic energy sector.

What we have seen is not what was promised. The new green energy technologies produce more expensive, less reliable, less abundant energy at higher prices than conventional forms of energy such as fossil fuels, nuclear power, and hydropower. Households, particularly poor households, shoulder the brunt of higher energy prices, along with higher prices for goods and services, including food. Evidence about the environmental benefits of wind and solar power make it nearly impossible to say if there was any environmental benefit. In addition, the green energy push in the countries we examined led to net job destruction, industrial flight, and reliance on foreign technology imports, and it opened the door to rampant rent-seeking and corruption.

As it turns out, the equation turns out to be: green energy policies = more expensive energy, goods, and services + green hardware imports + industry flight – jobs on net + rent-seeking and corruption +/– limited and costly environmental benefits.

[Kenneth P. Green is a resident scholar at the American Enterprise Institute.]
Posted by Mercury at 11:10 AM