Where is Miguel de Cervantes? 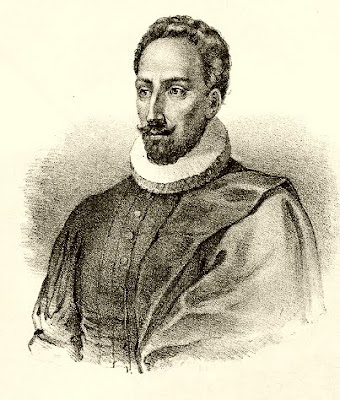 guardian.co.uk
Historians and archaeologists plan to reveal the true face of the author of Don Quixote of La Mancha, Miguel de Cervantes, as they embark on a quest to find the lost bones of one of western literature's key writers.

The project to seek Cervantes' bones, which lie buried somewhere in the walls or floors of a convent in central Madrid, would allow forensic archaeologists to reconstruct the face of a man only known from a picture painted by artist Juan de Jauregui some 20 years after his death.

The bones may also reveal whether Cervantes, who is believed to have died of cirrhosis and was accused by rivals of being a notorious tippler, drank himself into the grave. "They may not just help us to discover what he looked like, but also why he died," said historian Fernando Prado.

"It is said that he was very ill late in life, but that is also when he was very productive as an author."

Prado's team have won the support of local authorities and Madrid's archbishopric to hunt for the remains of the creator of the would-be knight-errant Don Quixote, who famously tilted at windmills, and of his sidekick, Sancho Panza.

Experts said his bones should be easy to identify as they would bear the marks of wounds suffered during the naval battle of Lepanto in 1571.

Cervantes received wounds to his chest and arms during a battle which saw a Spanish-led fleet defeat their Ottoman enemies in the Gulf of Patras off western Greece.

"He received a blast from a harquebus in the chest and another wound that left him unable to use one hand," Prado said. "Those two things will have left some imprint on his bones."

Cervantes was buried in the convent after dying at his home nearby in 1616. His death came just 10 days before that of Shakespeare [see footnote].

Cervantes' bones went missing in 1673 when building work was done at the convent. They are known to have been taken to a different convent and were returned later.

What nobody knows, however, is exactly where within the convent complex they are to be found.

Those planning to search for his bones say they will use geo-radar technology to search for hidden niches in the convent's walls and to scan up to five metres below ground.

Prado hopes the work can be carried out by 2016, when there are plans for a joint global celebration to mark the anniversaries of the death of Cervantes and Shakespeare.

• This footnote was appended on 26 July 2011. To clarify: Cervantes and Shakespeare both died on 23 April 1616. However, Spain was using the Gregorian calendar at that time, and England the Julian. They are 10 days apart.

The Literature Network
Posted by Mercury at 7:18 AM