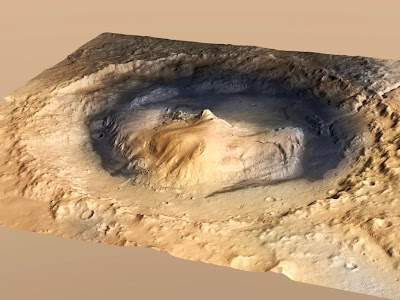 Nasa's next Mars rover will be aimed at one of the planet's deepest craters.

MSL-Curiosity weighs almost a tonne and is the size of a Mini Cooper.

It will carry instruments to study whether Mars had the conditions in the past to support microbial life.

The US space agency has selected an equatorial depression called Gale Crater to investigate that question.

The $2.5bn rover will launch from Florida in November.

It should touch-down at the Red planet in August 2012.

Gale Crater is about 155km in diameter, and its lowest point is about 4.6km below datum, the reference point on Mars from which all other elevations are measured.

The landing zone will be much narrower than the crater's width. But Nasa has high confidence the rocket-powered descent system designed for MSL-Curiosity can put it inside a target zone less than 20km across.

If this Skycrane, as it is known, works as planned, the rover will be delivered close to the central peak of the crater.

This is a huge mountain that contains layers of deposits that should offer an impressive view of millions of years of Martian geological history.

It's also going to be just an incredibly beautiful place... where you have steep-sided cliffs with the rover going in the shallower valleys between them.

"What we've learnt over 150 years of exploration is that if you start at the bottom of the pile of layers and you go to the top, it's like reading a novel," said mission project scientist John Grotzinger from Nasa's Jet Propulsion Laboratory.

"We think Gale Crater is going to be a great novel about the early environmental evolution of Mars that offers strong prospects potentially for the discovery of habitable environments, and maybe even a shot at discovering organic compounds."

Dr Grotzinger stressed that MSL-Curiosity is not a life-detection mission; it cannot identify microbes or even microbial fossils. But it can assess whether ancient conditions could have supported organisms.

Gale has been chosen because satellite imagery suggests it may well be one of the best places on Mars to look for these biological preconditions.


"Curiosity"--Clara Ma names next Mars rover
Posted by Mercury at 10:44 AM