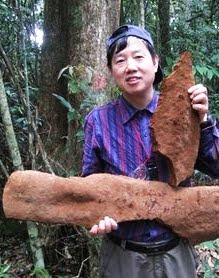 BBC Nature
The most massive fruiting body of any fungus yet documented has been discovered growing on the underside of a tree in China.

The fruiting body, which is equivalent to the mushrooms produced by other fungi species, is up to 10m long, 80cm wide and weighs half a tonne.

That shatters the record held previously by a fungus growing in Kew Gardens in the UK.

The new giant fungus is thought to be at least 20 years old.

The first example of the new giant fungus was recorded by scientists in 2008 in Fujian Province, China, by Professor Yu-Cheng Dai of the Herbarium of biology at the Chinese Academy of Sciences in Shenyang and his assistant Dr Cui.

"But the type collection was not huge," Prof Dai told BBC Nature.

The researchers were in the field studying wood-decaying fungi when they happened upon the specimen, which they describe in the journal Fungal Biology.

"We were not specifically looking for this fungus; we did not know the fungus can grow so huge," he said.

"We were surprised when we found it, and we did not recognise it in the forest because it is too large."

The fungus, F. ellipsoidea, is what mycologists call a perennial polypore - otherise known as a bracket fungus.

Being a perennial, it can live for a number of years, which may have enabled it to grow to such large size.

By colonising the underside of the large fallen tree, the fungus also had a huge amount of dead and decaying wood to feed on, helping to fuel its growth.

Fruiting bodies, such as mushrooms and toadstools, are the sexual stages of a many higher types of fungi, producing seeds or spores that produce further generations.

Tests on the density of the fruiting body suggest the whole thing weighs 400-500kg; it is also estimated to hold some 450 million spores.

"A small piece of the fruiting body is almost like my size," said Prof Dai.

The previous record holder was a specimen of Rigidoporus ulmarius, a polypore with a pileate fruiting body found in Kew Gardens in the UK in 2003.

It measured approximately 150cm in diameter with a circumference of 425cm.

After their initial encounter with the new record-breaking fungus, the scientists took samples of it back to the lab where to be analysed.

These tests revealed that the fungus was the species Fomitiporia ellipsoidea, and the researchers made two subsequent trips to study the specimen further.
Posted by Mercury at 8:14 PM