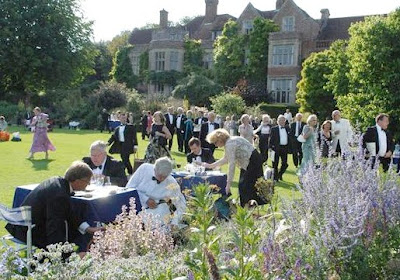 "Music in a rustic English setting"

The Los Angeles Times
It's summer on the Sussex Downs, 50 miles south of London. As the taxi makes its way from the village train station, ancient houses give way to rolling hills, sheep and, rarely for England, lots of trees. Down the hill under the arbor and then, on the left, a charming country house appears. Aside from a few discreet signs, it's only when you're coming up the drive, spot the flywall peeking out over the 700-year-old roofline and catch snippets of singers warming up that you realize the back garden is home to one of the world's finest opera houses.

The Glyndebourne Festival has been delighting opera lovers with first-rate productions since 1934, when John Christie built the a theater as a gift for his opera singer wife, Audrey Mildmay.

The 2011 festival runs through Aug. 28 and presents six operas in repertory: new productions of "Die Meistersinger von Nürnberg" (with Gerald Finley as Hans Sachs) and "Rinaldo," as well as revivals of "L'Elisir d'amore," "Rusalka" and "The Turn of the Screw."

Located on the Christie family estate and now in its 77th season, Glyndebourne boasts an acoustically spectacular 1,200-seat hall, 98% occupancy and an almost legendary reputation among singers.

"The warmth — you really feel as if you are part of the family business when you are singing at Glyndebourne, because everyone is so welcoming, warm and professional," said Swedish soprano Miah Persson. She was Donna Elvira in this summer's production of "Don Giovanni" and is in rehearsals for the August production of "The Turn of the Screw."

"The opera house is perfect! A mixture of great acoustics [and the] ability to create intimacy with the audience because of its size."

Because it is in the country, going to Glyndebourne is an outing rather than somewhere you rush off to after work. As such, the grounds are just as important as the opera house. An 85-minute intermission is designed to allow everyone to picnic in the gardens, by the lake or on the lawn. For foreigners, the sight of a thousand people dressed in black tie eating sandwiches on collapsible lawn chairs is something to behold. It is less peculiar when one considers that picnicking in Britain has traditionally been the preserve of the upper classes, mostly because they owned the land, had time to have a leisurely meal and were far enough removed from laboring to be able to romanticize their surroundings.

Glyndebourne could easily have been just another gentleman's folly, but from the beginning John Christie's aim was not to produce just the best opera he could but the best that could be done anywhere.

Building Glyndebourne's legacy has been the work of three men: John, his son, George, and grandson, Gus. Although he grew up on the estate and joined the board at 25, Gus studied zoology at King's College London and was for 10 years a wildlife cameraman before taking on the role of executive chairman in 2000.

"Inheritance is not always an easy thing to take on, but I had a lot of time to contemplate it while I was sitting in the bush waiting for a lion to wake up. I was very daunted by the idea, but I'm delighted to have made that decision," said Christie, 48.

Is it easier to wrangle lions or opera singers? Christie demurred but happily launched into a comparison of making a wildlife documentary and running an opera house. "It's all about having the right people in the right positions."

As a private opera house, Glyndebourne receives no government subsidy for the summer season, instead relying on ticket revenue, which accounts for 55% of the $34-million operating budget, plus donations and, to a smaller degree, investment income. Staying financially independent is important, so to ensure that remains possible, Glyndebourne has developed a business model that is so simple, it's almost embarrassing: Spend money when you need to and save it when you don't.

Explained Christie, "We've historically been very financially prudent, and there's not a lot of fat in the organization. Everyone who is employed here is absolutely necessary. We set out what we're going to do and we actually do it and produce top quality opera. If that was to slip, we would lose the confidence of our donors. One mustn't scrimp on budgeting. That's very important."

The commitment to leanness carries through to the board level, where there are only five members, all of whom are expected to be strategic thinkers with good business or media sense. In addition, 12 trustees are responsible for fundraising.

Glyndebourne relies on the subscription model much more than U.S. houses. Eighty percent of available tickets are allocated first to members. Associate members, who pay a $815 joining fee and $82 per year to stay on the list get the second look. There is enough demand to have all the tickets taken up wholly by members, but Glyndebourne purposely leaves 20% of the seats available for the general public so that guests can experience the opera and perhaps become members in due course.

With a pair of top tickets going for $815, hardly a season goes by without someone in the British press accusing Glyndebourne of being elitist. It's an easy shot to take, but in order to do so, one must willfully ignore the movie theater simulcasts, discounted nights for people younger than 30 and the more modestly priced standing-room tickets ($16).

There are other private opera houses in Britain (Garsington, Grange Park, Loughborough), but Glyndebourne is the only one that is so intimately linked with the family that owns the estate.

Christie's four young boys and wife, opera singer Danielle DeNiese (who appears in this year's "L'Elisir d'amore"), live at the house full time and share it with 30 or so temporary residents comprised of coaches, directors and pianists for the duration of the summer season.

"I think the fact that there is a house that is lived in by a family is very much part of the heartbeat of Glyndebourne," Christie said. "It would be a very different place without [us]." It's a sentiment that is echoed by many singers who have sung at the Glyndebourne, especially those near the beginning of their careers.

"It shows the spirit of the Christies. They are living and breathing opera," said Jessica Muirhead, this year's cover (understudy) for the Governess in "The Turn of the Screw" and a former member of the Glyndebourne on Tour. "The way they nurture young talent is really unique. The chorus is full of people that could be singing roles on stage, and the covers get four weeks of full rehearsal."

One of Christie's biggest aims since taking over the running of Glyndebourne was to make sure it didn't become a museum. Since 2009, fees collected from associate members have been funneled into a New Generations Programme, which is designed to facilitate the appointment of a composer-in-residence and additional apprentices, the filming of more productions, Web streaming and more programs for young audiences.

In the 1990s, when the old 800-seat theater was replaced by a modern, larger theater that currently hosts the festival, programming became more adventurous in part because there was now the space and technical equipment available to try out new ideas.

"When we do a traditional production, certainly a good proportion of our audience breathes a sigh of relief when the curtain goes up, but when the new productions work, they speak more to a new generation of opera-goers," Christie said. "We are out to entertain, inspire and challenge people. It's a juggling act, [but] there hasn't been any booing … recently."
Posted by Mercury at 7:49 PM