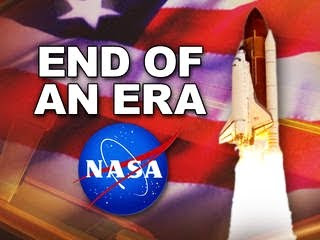 "Spacewatch: the end of the era of space shuttles"

guardian.co.uk
Unless there are late changes to the flight plan, Atlantis should land in Florida at 10:56 BST tomorrow, ending the era of the space shuttles. In the two weeks since I mentioned Nasa's uncertain role in post-shuttle manned spaceflight, the agency and world astronomy has been shocked by a move by the US House Appropriations Committee to cancel the 6.5 metre aperture James Webb Space Telescope, the long awaited, and vastly over-budget, successor to the Hubble Space Telescope. Europe is a major contributor to MIRI, a key infrared camera and spectrometer for the JWST, but Europe seems likely to be little more than a spectator as the telescope's future gets caught up in the current Washington battles and brinkmanship over the US federal budget.

Britain has a particular interest in the JWST, and not just because the flight model of MIRI has recently achieved its "first light" at the Rutherford Appleton Laboratory in Oxfordshire. The JWST's mirror and instruments are to be shaded from the sun by a large shield that allows them to reach the cold of space through a process called passive cooling. The concept was the brainchild of the late Dr Tim Hawarden, a British astronomer who was awarded Nasa's exceptional technology achievement medal a year ago. His former colleague, Dr Gillian Wright, of the UK Astronomy Technology Centre in Edinburgh, is the lead MIRI scientist in Europe.

"NASA fends off tears with shuttle's end in sight"

Google newsfeed
NASA astronauts and engineers fended off tears Wednesday as Atlantis made its final approach toward Earth, bringing an end to the 30-year shuttle program and closing a chapter in human spaceflight.

The shuttle was set to roll to a stop Thursday, exactly 42 years after US astronaut Neil Armstrong became the first human to step foot on the Moon as part of the Apollo 11 mission.

Atlantis's landing will end an era of US dominance in human space exploration, leaving Russia as the sole taxi to the International Space Station until a replacement US capsule can be built by private industry in the coming years.

But NASA administrator Charles Bolden insisted that once the shuttle eases onto the runway at Kennedy Space Center at 5:56 am (0956 GMT) Thursday, any tears on the faces of NASA employees will reflect both sadness and joy.

"My number one job right now is to ensure that we safely get Atlantis and her crew on the runway tomorrow," Bolden, a former astronaut, said on CNN.

"I will have tears of joy and tears of sadness at that time, but the tears of joy will be because we are already working with commercial companies to put cargo on the International Space Station as early as next year," he said.

"We are working with other commercial companies to put American astronauts and our partner astronauts on the International Space Station in four or five years."

Bolden has repeatedly brushed off critics who say the US space agency is in disarray, facing thousands of layoffs, an astronauts corps half the size it had 10 years ago and no human spaceflight program to replace the shuttle.

"We have just not done a good job of telling our story. NASA is very busy," Bolden said. "The president said to us, 2025 for an asteroid and 2030 to Mars. We have a lot of work to do ahead."

Meanwhile, the crew of four US astronauts aboard Atlantis savored their final day in orbit and NASA TV ran live images of the shuttle's view of Earth after a successful mission to restock the ISS for a year with several tons of supplies and food.

"The space shuttle has been with us at the heart and soul of the human spaceflight program for about 30 years, and it's a little sad to see it go away," commander Chris Ferguson said as the crew sat for a series of TV interviews.

"It's going to be an emotional moment for a lot of people that dedicated their lives to the shuttle program for 30 years. But we're going to try to keep it upbeat... We're going to try to make it a celebration of the tremendous crowning achievements that have occurred."

Over the course of the program, five NASA space shuttles -- Atlantis, Challenger, Columbia, Discovery and Endeavour -- have comprised a fleet designed as the world's first reusable space vehicles.

Besides the prototype Enterprise that never flew in space, only three have survived after Columbia and Challenger were destroyed in accidents that killed their crews.

At a time of US budget austerity, President Barack Obama has opted to end the program that has averaged about $450-500 million for each of its 135 missions.

He also canceled Constellation, a project that aimed to put US astronauts back on the Moon by 2020 at a cost of $97 billion.

Mission specialist Rex Walheim said he was optimistic about the future of the US space program, but acknowledged "we're in a kind of a transition period, which is a little bit uncomfortable."

NASA aims to turn over low-orbit space travel and space station servicing to commercial ventures, with a commercial launcher and capsule built by a private corporation in partnership with NASA ready to fly sometime after 2015.

"That'll free up NASA to do the heavy lifting of the beyond low-Earth orbit flights," to what Walheim described as "harder destinations" like an asteroid, or Mars.

"It'll be hard, but we'll get there, going farther and farther, and we'll get to new places real soon," he said.

Until the private sector fills the void, the world's astronauts will rely on Russian Soyuz rockets for rides to the ISS.

NASA flight director Tony Ceccacci said his team was trying to stay focused on getting the shuttle home safely.

"Every time you feel something you have to remember that this thing is not over yet," he told reporters.

"We have a motto in the mission control center that flight controllers don't cry, so we are going to make sure that we keep to that."
Posted by Mercury at 9:01 AM